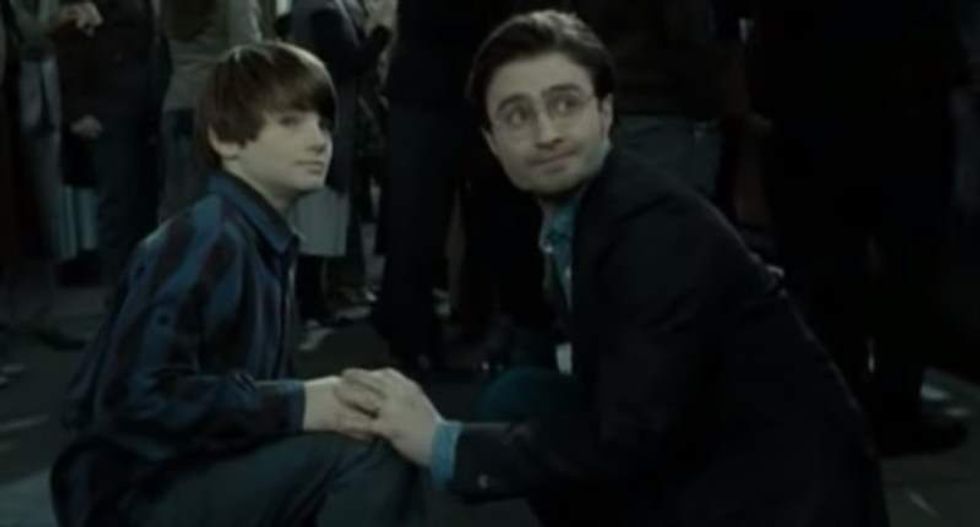 Albus Potter (Arthur Bowen) and his father Harry (Daniel Ratcliffe) as seen in the film adaptation of 'Harry Potter and the Deathly Hallows.' [YouTube]

Fans of the Harry Potter book and film series took notice on Tuesday when J.K. Rowling, who penned the original books, tied up some loose ends regarding the title character's two sons, For The Win reported.

Rowling said on Twitter that James Potter was starting his studies at Hogwart's School of Witchcraft and Wizardry on Tuesday, meaning that the series epilogue, which shows Harry and wife Ginny taking their younger son Albus Severus Potter to meet the Hogwarts Express, takes place in 2017.

The series established that Sept. 1 is the traditional back-to-school date for all Hogwarts students, meaning that the first meeting between Harry Potter and best friends Ron Weasley and Hermione Granger took place in 1991.

Rowling's first post, which was retweeted around 99,000 times, can be seen below:

Harry tells Albus in the epilogue that he would be happy for him even if Albus was placed into Slytherin House, but that the school's Sorting Hat would take his wishes into account if he wanted to be in Gryffindor House like Harry. Rowling also revealed on Tuesday that James was placed in Gryffindor by the time of the epilogue:

The tag saw contributions from not only individual fans, but the official Twitter feed for the University of Oklahoma :

One fan account also noted James' appearance (as played by Will Dunn) in the film adaptation of Harry Potter and the Deathly Hallows:

Watch the film adaptation of the epilogue, as posted online, below.