Ben Carson: I'm 'certainly willing' to accept Kanye as president, but can't 'take that chance' with a Muslim 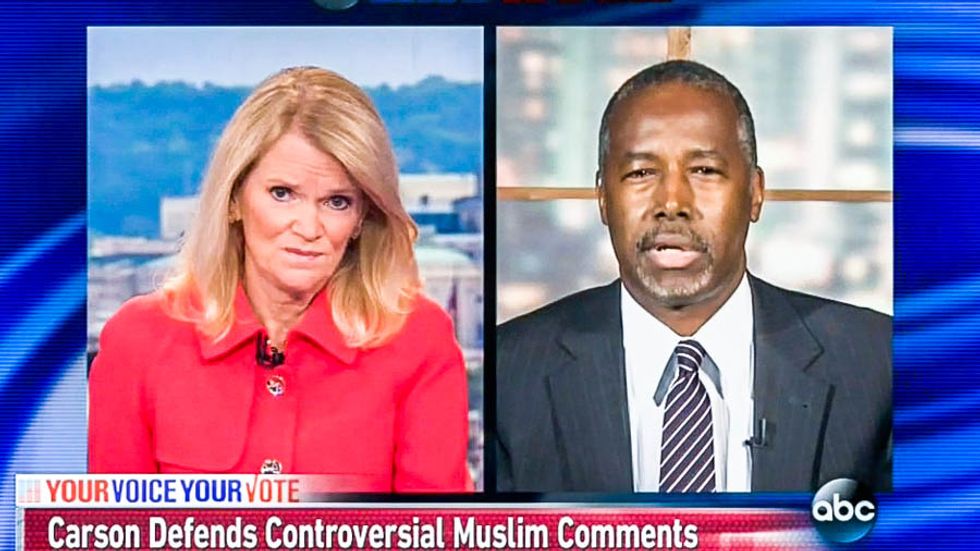 Republican presidential candidate Ben Carson argued over the weekend that it was too dangerous to "take that chance" on electing a Muslim president, but he said that musician Kanye West deserved the opportunity.

During a Sunday interview on ABC, Carson accused host Martha Raddatz of taking his recent comments about not supporting a Muslim president out of context.

"I'm reading transcript, Dr. Carson," she told the candidate. "And that's exactly what you said."

Carson explained that he would only oppose a Muslim president if they did not "subjugate their religious beliefs to our Constitution."

"What we should be talking about is Islam and the tenets of Islam," Carson opined. "What I would like somebody to show me is an approved Islamic text that opposes Sharia. If you can show me that, I will begin to alter my thinking on this."

For her last question, Raddatz pointed out that Kanye West had recently called Carson "brilliant."

Carson explained that he had spoken to West, and he had been impressed with his business skills.

"I talked to him about himself and maybe some other people in the pop culture doing some music that might be uplifting, that might give young women a sense of their value, and young men a sense of responsibility," Carson remarked.

"Do you think he would be a good president?" Raddatz asked, alluding to West's promise to run in 2020.

"I'm certainly willing to give him a chance." Carson replied. "We'll see. He'll be able to explain things and see if he resonates with the people."