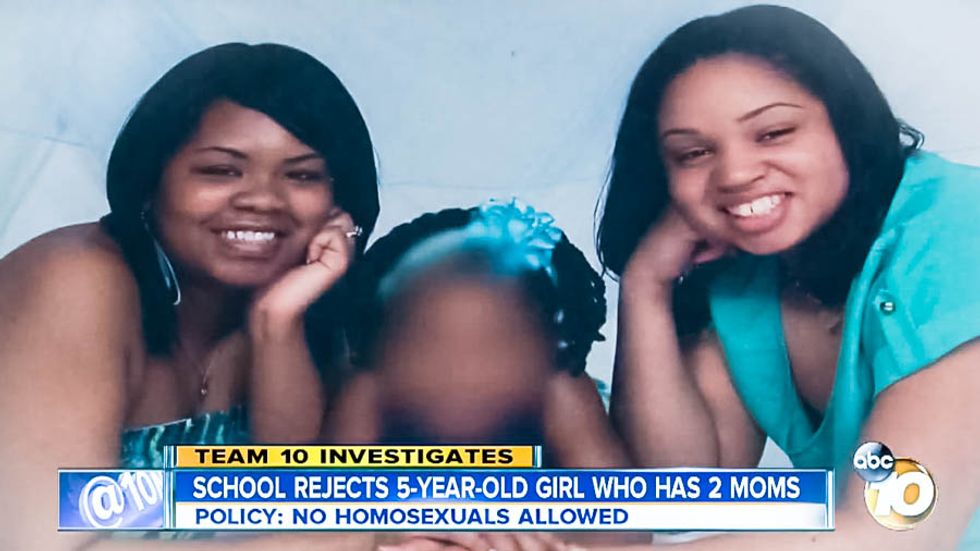 A Christian school in San Diego has defended its decision to ban a 5-year-old girl after learning that her mothers were lesbians.

Sheena, who did not wish to reveal her last name, told KGTV that her daughter had attended Mt. Erie Christian Academy for years. So was she was surprised when she and her wife, Lashaune, were summoned to meet with a pastor at the school earlier this month.

"It was heartbreaking,” she recalled. “I didn't finish the conversation with them when they took us in the room because I just, I didn't want to look at them any longer. I just couldn't believe that they did that."

"They told us, ‘Oh this is not about your child,’ but it is about my child," Sheena said. "If we knew from the beginning that this was unacceptable, they didn't condone or believe in this, if it was such a big deal, we would have never started her off there."

"I would never put my child's emotional wellbeing in an unstable setting like that."

The director of Mt. Erie Christian Academy told KGVT that Sheena's daughter was banned because "[t]he Bible says homosexuality is a sin. We don't condone any sinful lifestyles."

A copy of the student handbook obtained by KGVT defends the school's right to discriminate against LGBT people by quoting Bible verses as part of the non-discriminating policy.

“Mt. Erie Christian Academy is a religious, Bible-believing institution providing education in a distinct Christian environment, and it believes that its biblical role is to work in conjunction with the home to mold students to be Christ like. On those occasions in which the atmosphere or conduct within a particular home is counter to or in opposition to the biblical lifestyle that the school teaches, the school reserves the right, within its sole discretion, to refuse admission of an applicant or to discontinue enrollment of a student. This includes, but is not necessarily limited to, living in, condoning or supporting sexual immorality; practicing homosexual lifestyle or alternative gender identity; promoting such practices; or otherwise having the inability to support the moral principles of the school (Leviticus 20:13a; Romans 1:21-27; Matthew 19:4-6; I Corinthians 6:9-20).”

Leviticus 20:13, the first Bible verse footnoted by the school's non-discrimination policy, calls for homosexuals to be put to death.

But Sheena said that she was willing to take her chances in court.

"I want my baby to be safe when she grows up," the mother insisted. "I don't want her to ever have to be discriminated against because of her lifestyle. That's not fair."