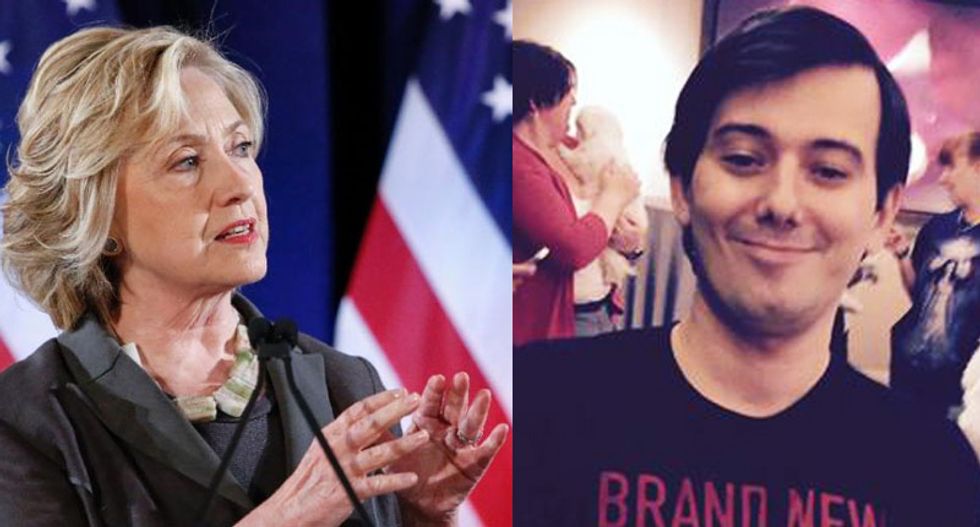 Shares in European pharmaceutical companies dropped on Tuesday following Hillary Clinton’s promise to publish a plan to bring down the price of prescription drugs.

The frontrunner for the Democratic party’s presidential nomination put the drugs industry on notice on Monday after it was revealed that a US company had increased the cost of a drug used by HIV patients from $13.50 per pill to $750.

Martin Shkreli, a former hedge fund manager who now runs Turing Pharmaceuticals, said that although patients typically took the drug, Daraprim, for several weeks, it was still a bargain.

Shkreli said producing the 62-year-old drug at the old price was not financially viable but his comments could prove the final straw for the drugs industry, which has been accused of overcharging for treatments for cancer and other diseases.

Clinton tweeted on Monday: “Price gouging like this in the specialty drug market is outrageous. Tomorrow I’ll lay out a plan to take it on.”

Clinton’s comment, made shortly before the UK stock market closed, sent shares of US biotechnology companies falling on Monday. It was later reported that she is proposing a $250 monthly cap on prescription drugs for patients with chronic or serious medical conditions.

The impact of her comments spread to European drugmakers on Tuesday. In the UK, shares of GlaxoSmithKline and AstraZeneca fell by more than 3% and Shire, the Irish biotech company, dropped more than 4%. Roche, the Swiss drugmaker, and Germany’s Merck each fell more than 2%.

Laith Khalaf, an analyst at the UK stockbroker Hargreaves Lansdown, said: “A risk these companies have is that what they are selling is an adjunct of people’s health, and politicians are likely to take a very close interest in both safety and pricing. Discovering new drugs takes an enormous amount of investment and resources and there is a balance to make sure companies have the right incentives to do that while making sure they are fairly priced.”

He said what Turing had done sounded more like trading – buying up the rights to a drug and then increasing the price.

Turing was launched by Shkreli in February with a pledge to produce innovative treatments and bought Daraprim in August for $55m. The antibiotic is used by about 2,000 Americans each year to treat toxoplasmosis, a parasitic infection that rarely causes symptoms unless the patient’s immune system is weakened, making HIV sufferers susceptible.

The drug sold for about $1 a pill when it was made by GlaxoSmithKline but the price has gone up since Glaxo sold the rights to CorePharma in 2010. CorePharma was sold last year to Impax Laboratories, which sold Daraprim to Turing.

The Infectious Diseases Society of America and the HIV Medicine Association wrote jointly to Turing this month describing the price increase as unjustifiable and “unsustainable for the healthcare system”. Turing’s action is the latest in a series of price rises made by companies that buy old drugs and turn them into expensive treatments.

Shkreli initially responded to criticism by posting tweets quoting the rap artist Eminem before Turing issued a more measured statement stressing its commitment to providing affordable access to its treatment.