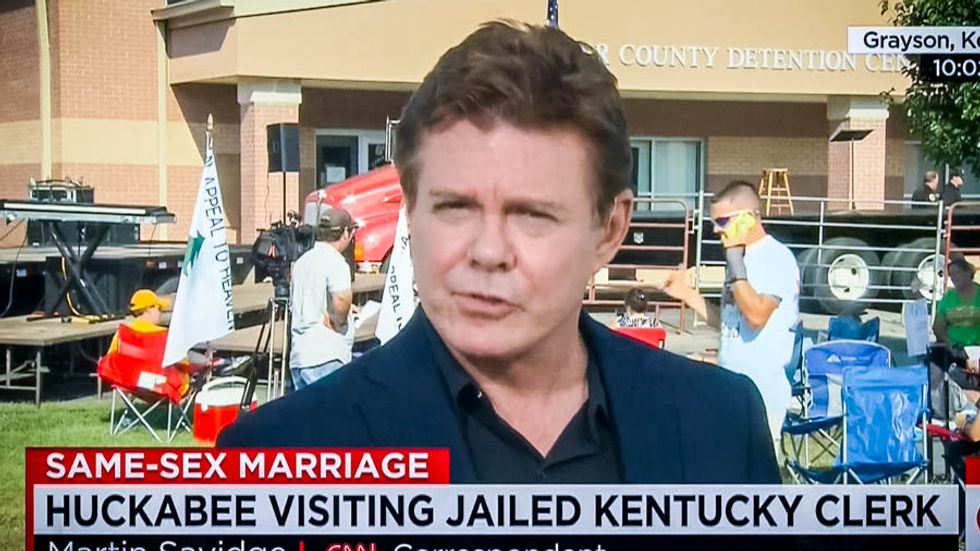 CNN correspondent Martin Savidge reported that Republican presidential candidate Mike Huckabee was being allowed to set up a stage at the "front door" of the prison where Kim Davis was being held because local officials had given their "tacit" endorsement of Davis' fight against marriage equality.

Just hours before Huckabee was set to meet with Davis at the Carter County Detention Center, Savidge pointed out that five schools had been closed in the area over concerns that supporters would bring traffic to a halt in the county.

"The stage is set or maybe I should say the truck is set," Savidge told CNN host Carol Costello, pointing to a large flatbed truck that was parked just feet from the detention center's front door. "That's actually where Mike Huckabee is going to be speaking."

"And it's expected it's going to be a pretty big crowd," he continued. "Grayson is not that big of a town so hence the reason why they decided to put school off for one more day. There were concerns about traffic jams and people getting around. There are also fire trucks and emergency equipment standing by."

According to Savidge, it was "quite clear" that officials had allowed the stage so close to the jail because they wanted Davis to hear her supporters.

"She's right inside that building there, the rally is right up to the front door of that facility," the CNN correspondent noted. "So it seems pretty clear that it's tacitly got the endorsement of county officials and law enforcement as well."

"Almost everybody here is in support of Kim Davis."