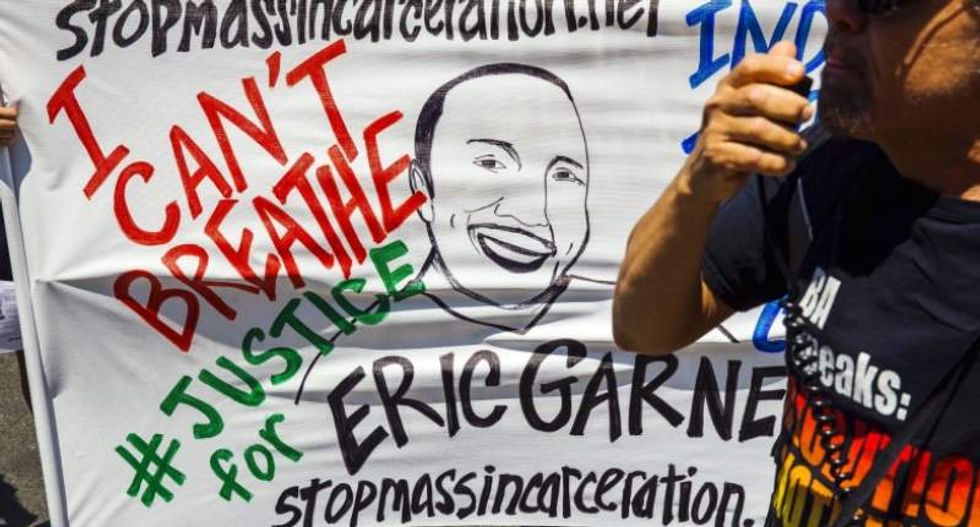 Protesters rally and speak out on the one year anniversary of the death of Eric Garner in New York, July 17, 2015. REUTERS/Lucas Jackson

Daniel Pantaleo, who put Garner in a chokehold, allegedly hit another man’s car while on duty in June, causing ‘severe and permanent’ injuries

The New York police officer accused in the death of Eric Garner – a Staten Island man who died after being placed in a banned chokehold – is being sued for allegedly crashing his police vehicle into another man’s car causing “severe” injuries to the driver, the New York Daily News has reported.

Daniel Pantaleo, 29, has been named as the plaintiff in a civil suit filed in Queens supreme court against the NYPD, alleging the officer crashed his police car into a Staten Island man’s car on 20 June, roughly one month before the fatal encounter with Garner, the paper reported.

The driver of the other vehicle, Leonardo Aguirre, claims in the suit that the police officer was trailing his 2010 Chevrolet closely when the collision occurred, about 15 minutes away from the officer’s 120th precinct station house. Aguirre said he suffered “severe and permanent” injuries to his neck, back, left shoulder and knees, according to the suit.

Pantaleo remains on modified duty from the NYPD after he was caught on video wrestling Garner to the ground and placing him in a chokehold while the man gasped: “I can’t breathe.”

Garner’s death prompted large-scale protests against police brutality and its disproportionate use against people of color across the country.

A Staten Island grand jury declined to bring charges against Pantaleo. The US Department of Justice is conducting its own investigation into his death, and the NYPD is doing the same.

Pantaleo has previously been accused of misconduct, including carrying out a strip search in public as part of a search for illegal drugs. According to reports, he has been sued at least four times. One of those cases involved two men who alleged Pantaleo strip searched them during a traffic stop on Staten Island in 2012.