'Et tu, Brute?' Why Julius Caesar is wildly popular 2,059 years after his assassination 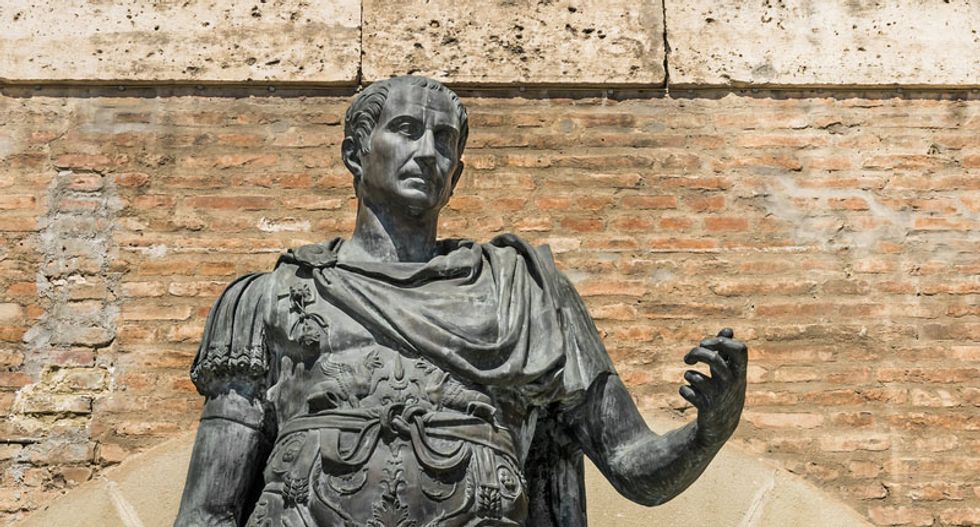 “All the world’s a stage,” William Shakespeare wrote, and his play Julius Caesar has been produced on just about all of them this year. It has graced the theaters such as the Chicago Shakespeare Company, the Royal Shakespeare Company and the Globe Theaters in England, the Baltimore Shakespeare Factory, the American Shakespeare Center, in Staunton, Virginia, the Cincinnati Shakespeare Theater, the National Players Touring Company, the Sacramento Shakespeare Theater, in California, the Bridge Repertory Theater in Boston, the African-American Shakespeare Company, in San Francisco, and a dozen more theaters in smaller cities in different countries. Caesar’s story has been turned into several movies, good and bad, and an HBO television series. There is another movie about him being planned now. He was even a character in a Planet of the Apes movie. This is not new. The play Julius Caesar has been running in theaters somewhere around the U.S. and the world for centuries.

It has been staged with men playing Caesar and, more recently, with women taking on the role. There have been white Caesars and African-American ones, Caesar as he looked in 44 B.C.E. in a toga and as he would look today, in a business suit and a New York office.

What is the allure of this play about a man stabbed to death by his friends in 44 B.C.E. at the height of his glory? What makes his magic span the centuries and the continents? Why is Julius Caesar, lover of power and Cleopatra, too, so wildly popular in 2015?

The answer is the public’s fascination with his unique story, and a true story. We all prefer a good true tale to a fictional one. It is a dozen great dramas rolled into one, woven together majestically by Shakespeare (the play, based on a book by Plutarch, who talked to men who lived in Caesar’s time, is reasonably accurate history). Julius Caesar is a perceptive study in power – how it is gained, how it is used and how it is lost.

Here are the ten reasons why we love the jovial old dictator so much: 1) the rise of a free spirited young man up through the ranks to become Emperor of the Roman Empire; 2) he was a good statesman who ran the empire for five years and did a pretty decent job of it; most generals are terrible statesmen; 3) he was murdered not by the enemy, but by his friends and colleagues; 4) he was an exceptional general who fought with his men; his armies went just about everywhere and never lost; 5) it's a good war story; 6) Cleopatra; 7) Cleopatra; 8) Cleopatra; 9) Cleopatra; and 10) Cleopatra.

Caesar, a roman Senator who was a superbly skilled politician, managed to get himself appointed the Governor of Gaul, that constituted the northern part of Italy and what is now France, knowing that all Governors become Generals and have an army. He had served in the army as a young man and knew it at its best and worst. He then took his army and increased its size with bonuses, high salaries and pensions and marched into Gaul, where he took on everybody and defeated them. He stayed in the army for nine years and then marched on Rome when threatened with a trial for war crimes. He defeated Pompey, Rome’s top general, took over the reins of government when the Senate appointed him dictator for life. He then began what turned out to be a five-year term and aided the poor of the empire, created thousands of jobs, built highways and byways, perfected the calendar and added the month of July, named after himself. He won a few wars, kept people in line and the Empire prospered. The Senators charged him with creating a secret police force, ignoring advice, micro-managing Rome’s affairs and never delegating power. Most of all, they charged him with usurping their power and several dozen stabbed him to death on March 15, the Ides of March, when he walked into the Roman Senate. His chief of staff, Mark Antony delivered a glorious eulogy of Caesar (“for these are honorable men…”) and took revenge on those who killed Caesar.

Theater and film have always given us Caesar the way we all want him, the bold, aggressive, confident army commander and steely, visionary statesmen. He was the General’s General and looked the part, too.

Caesar’s great fame, though, as if he needed any more, was his affair with Cleopatra, the Queen of the Nile, the Miley Cyrus of her day. The very married Caesar’s fling with Cleopatra, over the course of several years and one son, had jaws dropping throughout the Mediterranean. She cuddled up to him to keep her power in Egypt and he cuddled up to her to, well….

Ironically, it was the real life love affair between Richard Burton (playing Mark Antony) and Liz Taylor (playing Cleopatra), with Rex Harrison as Caesar as well, in the 1960 movie Cleopatra, that cemented Caesar’s fame in the eyes of the modern world. The movie received tepid reviews, but millions went to see it and everybody read about it somewhere because all the media was in a frenzy about the affair between the very married Burton and the very married Taylor. And then, of course, it was passed on to television, where it airs all the time. Films about Caesar, such as the film version of the play with Marlon Brando, and another version, starring Jason Robards, are shown also.

Cleopatra is not in the play Julius Caesar and, despite that, the play has been inordinately successful for four hundred years.

Now, one could argue and forcefully, that Julius Caesar was not even one of Shakespeare’s top ten plays, so why is it so well known today? Well, one reason is that Liz Taylor never slinked her way cross the screen in Henry V.

That combination of skullduggery, murder most foul, love affairs, the headstrong young boy makes good, the world’s love affair with ancient Rome, with battles and naval encounters (even pirates, too), plus a bloody, gruesome murder, make Caesar’s story as epic today as it was in 44 B.C.E., a Gone with the Wind with sandals and swords. We just cannot see enough movies, plays and television series about him. He lives on at the head of his legions forever.

And maybe one day, given his titanic stature, he’ll gain the greatest glory of all……Netflix!