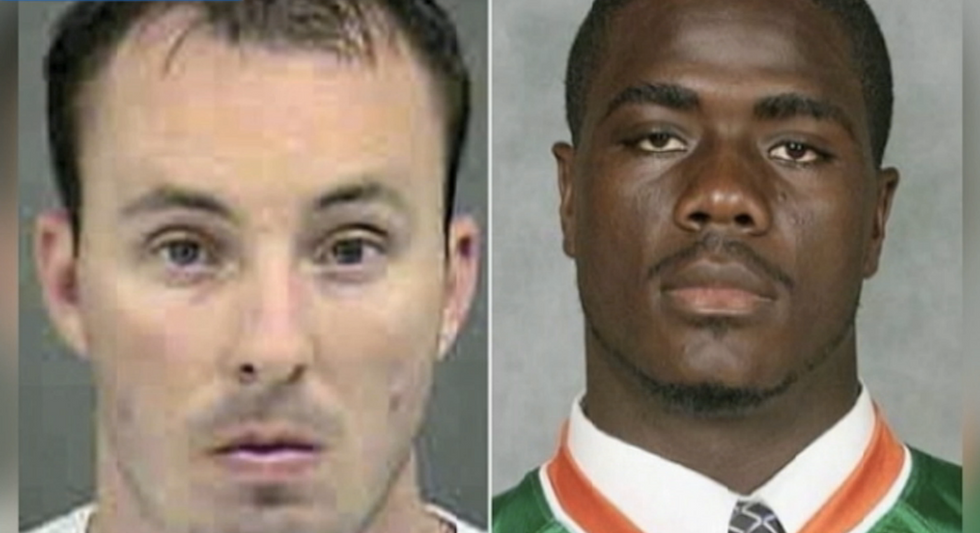 Relatives paying their first visit to the site of the killing of an unarmed black man by police in North Carolina were greeted by a sign attacking civil rights activists as racists and ordering them to “leave our neighborhood alone”, according to family representatives.

Jonathan Ferrell’s mother and brother travelled on Monday to Bradfield Farms, in the eastern suburbs of Charlotte, to lay a wreath on the spot where the 24-year-old former Florida A&M University football player was fatally shot by a police officer two years ago.

According to a family spokesman, before the Ferrells arrived at the site of the shooting a wooden placard was placed nearby. It displayed a message in white paint that said: “We reject your racist attitude … leave our neighborhood alone!”

A small vigil with the Ferrells had been scheduled by local activists for Monday evening.

The Ferrell family’s spokesman, Ryan Julison, said: “It’s incredibly disappointing that the message this neighbourhood would choose to send to this grieving family is something so negative.”

The location of the sign, at the entrance to the Bradfield Farms Swim and Racquet Club, was verified by the Guardian.

Randy Fann, a spokesman for the Bradfield Farms homeowners association, said in an email the association did not know who was responsible. “We were sorry to learn about the sign that was put up. As soon as we learned about the sign, it was removed,” said Fann. “This sign is certainly not representative of the fine neighborhood that is Bradfield Farms.”

Protests broke out last month when a mistrial was declared in the trial of Randall Kerrick , a white Charlotte-Mecklenburg police officer who was charged with the voluntary manslaughter of Ferrell in the early hours of 14 September 2013. Prosecutors said they would not seek a retrial.

Kerrick and two other officers were responding to a 911 call made by a homeowner who panicked when Ferrell knocked on the door of her house. He was apparently seeking help after crashing his car nearby.

Police claimed that after one of the arriving officers fired a Taser at Ferrell and missed, the 24-year-old ran towards Kerrick, who responded by shooting at Ferrell 12 times, striking him 10 times and killing him.

Judge Robert Ervin declared the mistrial when a Mecklenburg County jury failed to reach a verdict after four days of deliberations and the foreman said they were deadlocked. Earlier this year, Charlotte authorities paid Ferrell’s family $2.25m to settle a civil lawsuit over his death.

Ferrell’s younger brother Willie said on Monday that he and his mother planned to mark the second anniversary of his death with a “peaceful, calm and quiet” wreath-laying.

“It will be very emotional to see where his life was taken,” Willie Ferrell said. “I hope it can bring some closure, but we continue to fight for justice.”

Willie, who is 25 and played football for Florida A&M University alongside his brother, said the family was focused on developing the “Justice For Jonathan” foundation, which aims to improve understanding between law enforcement and the people they police.

“We want to help send young kids to school, help get them off the streets, help them make sure they don’t go down the wrong road, and to help police officers not look at young people and stereotype them based on what they see on television, or the colour of their skin, or how they speak,” said Willie Ferrell.

“It’s about helping and making a change. That’s really what Jonathan was about.”