Fox host backs 'What Would Jesus Do' painting: 'If you're in a courthouse, you could use a little Jesus' 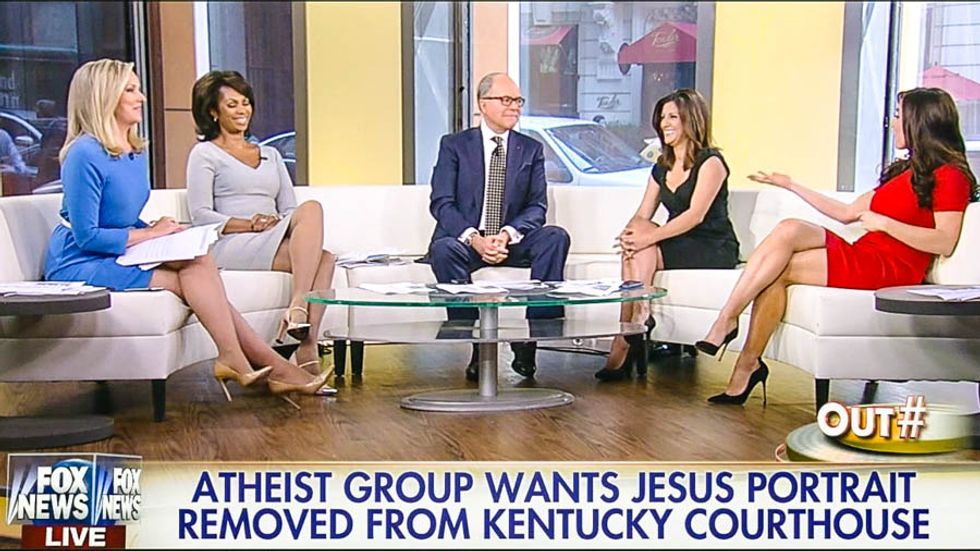 The hosts of Fox News' Outnumbered argued on Thursday that a painting of Jesus Christ should not be removed from a Kentucky courthouse because it would have a negative impact on society.

Earlier this week, supporters of the painting gathered outside Breathitt County Courthouse to urge officials to ignore a letter from the Freedom of Religion Foundation calling for it to be removed.

Fox News contributor Peter Johnson pointed out to the four hosts of Outnumbered that the painting's caption -- "In your place what would Jesus do" -- could be interpreted as instructions to potential jurors.

"You're giving some really great legal arguments," host Rachel Campos-Duffy interrupted. "Can I just talk about it like a mom? They're not just ripping out religious symbols in these places, I think they're ripping out the morals and the values that are really behind this."

"And I think, you know, John Adams said our country was founded -- our Democracy was only supposed to be for a moral and religious people, that kind of liberty could only be harnessed and used wisely by a moral and religious people," she continued. "As a mom, it is becoming so hard to teach our kids right from wrong because there's nothing left in our culture to guide them."

"And I would say that in a vacuum, you get nihilism, you get the extremism that the pope was talking about that's so dangerous."

Co-host Andrea Tantaros agreed that courthouse officials should not bow to the "tyranny of the minority."

"I do think that it does point to a larger movement away from a more spiritual and moral society into a coarsened culture," Tantaros opined. "We've seen this evolution. Why all these lawsuits now?"

"Does this set a precedent?" she wondered. "I kind of believe if you find yourself in a courthouse, you probably could use a little Jesus in your life."

Watch the video below from Fox News' Outnumbered, broadcast Sept. 24, 2015.