Here's how neuroscientists used Alice in Wonderland to pinpoint psychosis 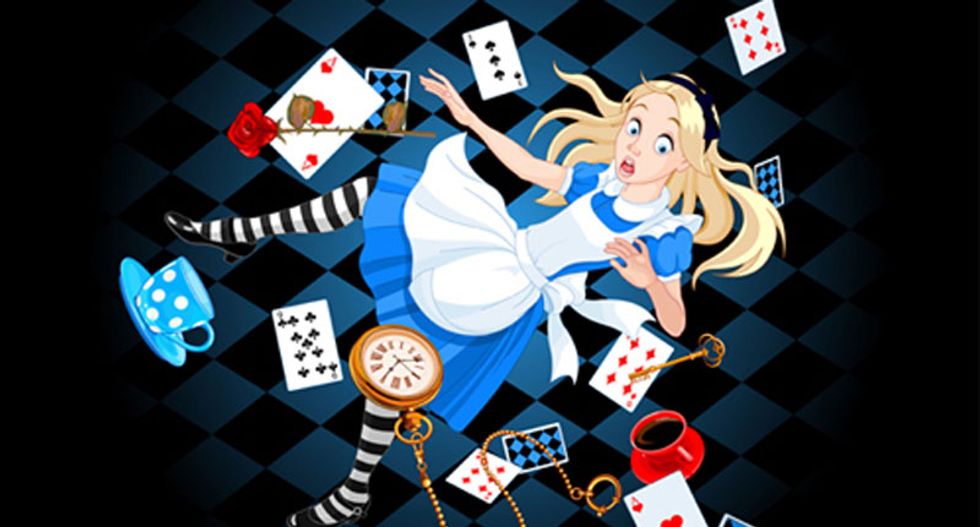 We all know Alice’s tale. Seven-year-old girl falls into an imagined world where, as an anthropomorphized cat famously explains, any and everyone is mad, including Alice herself. She meets some fantastical creatures and an evil queen. Adventures are had. As some believe, Alice’s time in Wonderland is less a dreamed-up journey than a trip of the acid variety. Whatever your take, in the 150 years since the book’s publication, most scholars who’ve combed through Lewis Carol’s pun-laden words have regarded Alice's travels as some type of surreal experience, be it a waking delusion, drug-induced hallucination or something dreamed up by a little girl who fell asleep in a field. The surreality of the story is precisely why, in a newly published study, Finnish neuroscientists from Aalto University chose to scan people's brains as they watched Alice in Wonderland in order to identify early-stage psychosis.

At this point, schizophrenia and other psychotic disorders (like all mental illness) are diagnosed through psychiatric behavioral evaluations. In other words, doctors can’t peer into patients’ brains to determine who has which mental illness. Outside the doctor’s office, however, researchers are using fMRI (functional Magnetic Resonance Imaging) to understand how mental disorders manifest in that three-pound mass of nerves of spongy tissue underneath our skulls.  It’s easier to pinpoint brain differences in chronically ill psychotic patients because the neural imprint of psychosis becomes more pronounced as disorders progress.

But, it’s important to identify psychosis in a more preliminary form because, as lead study author Eva Rikandi told Van Winkle’s via email, psychotic disorders tend to be debilitating, and early detection and intervention can be crucial to treatment outcomes.

So, for the study, researchers recorded activity in the brains of 78 people as they watched Tim Burton’s Alice in Wonderland. Forty-six of the participants were first-episode psychotic patients (those who’d had one and only one psychotic episode) while the other 32 had no history of psychosis. According to Rikandi, none of the first-time patients had been formally diagnosed with a specific mental illness because psychosis is related to several disorders.

The team knew beforehand who belonged to which group. What they wanted to see, Rikandi explained, was if they could train a computer algorithm to pick out psychotic patients based on brain images taken of people processing complex information. In this case, the complex information was Alice’s adventures, a choice that was entirely deliberate.

Since in psychosis the ability to recognize what is real is somehow changed, Rikandi and her colleagues figured that showing subjects content that is clearly impossible could perhaps provide insight into the evaluation. “Other fantasy movies were considered, but Alice was thought to be the least scary one,” she said.

More importantly, explained Rikandi, they wanted to see if the algorithm would zero in on the same area of the brain, called the precuneus, that researchers hypothesized would serve as a harbinger of psychosis. The precuneus is associated with such functions as memory, self-awareness and consciousness. As researchers hoped, the algorithm both targeted the precuneus and correctly picked out psychosis with 80 percent accuracy.

This study wasn’t the first attempt to classify psychosis in its infancy, but it was the first to “directly associate early signs of psychosis with abnormal activity in the precuneus.”

The team’s approach — recording neural activity during a viewing of a trippy movie — was also innovative. In attempts to uncover fledgling psychotic disorders, other scientists have mostly performed brain scans while subjects were in a resting state (i.e., doing nothing) or completing simple cognitive tests, such as a a memory game.

Both previously used approaches have flaws. Why? Well, when people are doing nothing (resting state), they could be thinking about anything. And if two people, unbeknownst to researchers, are respectively pondering the Syrian refugee crisis and Jon Hamm’s newly single status, comparisons of their opaque brain activity isn’t all that useful. Scanning people’s brains as they perform one highly specific task suffers from a different issue: The scenario is too artificial to reflect real-life situations in which people have to process complex information. As experimental activities go, researchers saw film-viewing as both sufficiently controlled and realistic.

Still, any true fan of Alice’s curiouser and curiouser adventures will notice one glaring flaw in the study: They chose the Tim Burton adaptation over the campy 1985 made-for-tv movie featuring the likes of Ringo Starr, Gregory Hines and Scott Baio. Talk about a fantasy.