Huckabee defends freezing Cruz out of Kim Davis rally: 'This was our event ... he didn't call us' 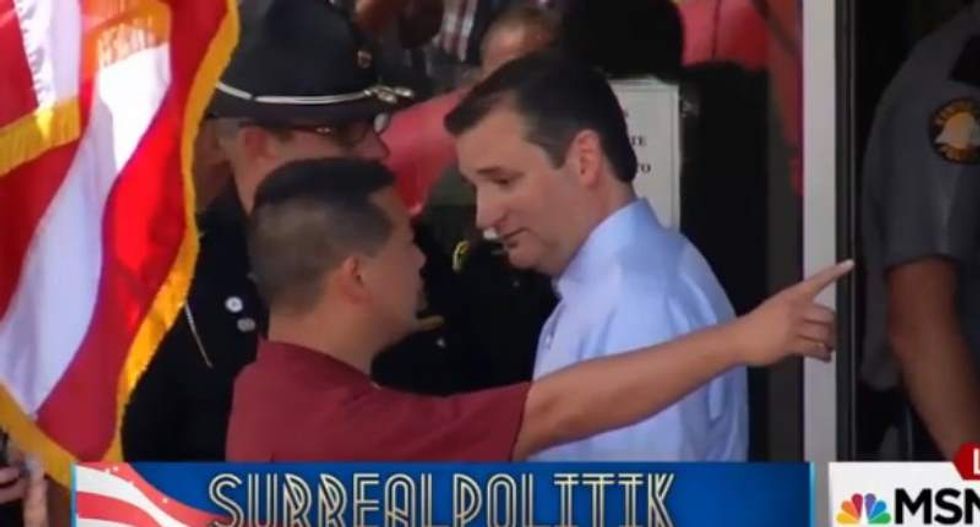 Sen. Ted Cruz (R-TX) is blocked by a staffer for former Gov. Mike Huckabee during an event in Grayson, Kentucky on Sept. 8, 2015. [MSNBC]

Former Arkansas Gov. Mike Huckabee accused Sen. Ted Cruz on Wednesday of trying to crash his rally on behalf of Kim Davis, acknowledging that his team prevented Cruz from speaking to the media, Buzzfeed reported.

"This was our event," Huckabee told Newsmax host Steve Malzberg, explaining that his staff arranged for the permits and stage to be put up in Grayson, Kentucky, where Davis had been jailed for refusing to issue marriage licenses to same-sex couples.

"We had no idea Ted Cruz was going to show up until the day before and he didn't call us," Huckabee said. "He called several other people on the program and asked about it."

The Texas lawmaker, who like Huckabee is vying for the Republican presidential nomination, was reportedly "incredulous" after a Huckabee staffer physically prevented him from talking to reporters. MSNBC's Rachel Maddow aired video of the encounter on her show on Tuesday night.

While the event was free, Huckabee said, Cruz was not allowed to "come to an event that we're putting together and invite himself on the program anymore than I could go a few weeks ago to his event in Des Moines and just show up and expect to be a speaker. It's real simple."

"Fair enough," Malzberg said, before the former governor added that he arranged for Cruz to meet Davis in jail, an offer he considered "pretty gracious."

While Huckabee ended up taking the stage with Davis and her attorney, Mat Staver, Cruz was seen looking "very sad" in the stands. The senator was also apparently upstaged in his meeting with the clerk, as he was barely visible in a photo posted online by GOP gubernatorial candidate Matt Bevin:

Watch Huckabee's remarks, as posted online on Wednesday, below.