Hundreds of Latinos protest at Trump rally in downtown Dallas, clash with supporters 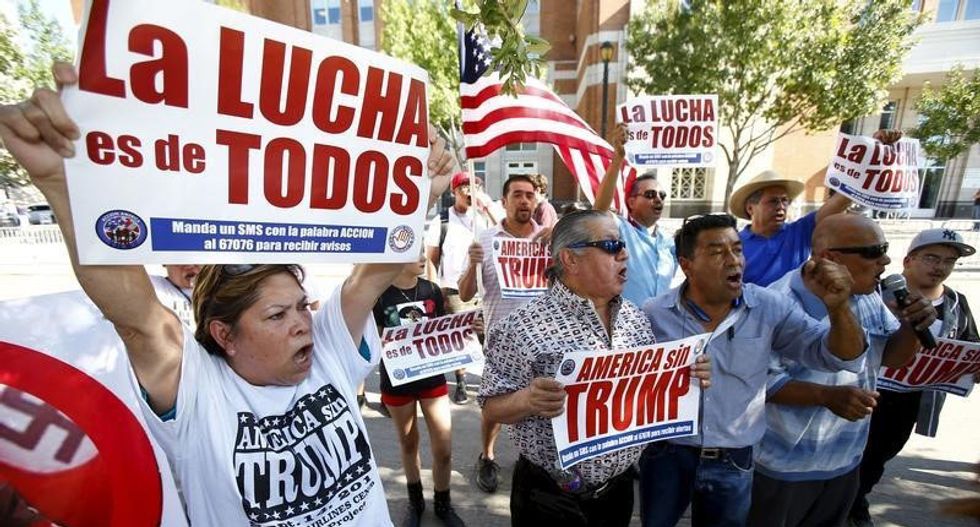 Protester Gabriella Garcia holds a sign outside of a political rally for Republican presidential candidate Donald Trump at a rally in Dallas, Texas September 14, 2015. REUTERS/Mike Stone

A downtown Dallas rally by presidential hopeful Donald Trump produced some of the sharpest scenes of conflict yet in his campaign as hundreds gathered to protest his positions on immigration and confronted supporters as they left the event.

Inside the rally at the American Airlines Center sports arena, the biggest cheers from the thousands of attendees erupted when the Republican front-runner said it was time to stop illegal immigration.

"It's a massive problem," Trump said as the crowd around him stood roaring and waving Trump campaign signs and American flags.

But when the rally ended, supporters walked to their cars through a gauntlet of protesters, many of them Hispanic, shouting "shame on you." Some yelled back: "Keep them out!" Police struggled to keep the two sides separate.

Trump, a New York businessman-turned-politician, has said he would deport the 11 million people estimated to be living in the United States illegally and build a wall between the U.S. and Mexico. In a speech on June 16 launching his campaign, he said of people crossing the Mexican border: "They're bringing drugs, they're bringing crime, they're rapists."

His comments drew immediate criticism, but in the weeks that followed Trump insisted they had not hurt his popularity among Latinos.

Dallas is 42 percent Hispanic and 51 percent white, but the demographics of the crowd of about 20,000 who came to see Trump was much different. Latino supporters were hard to find.

Karina Ramirez, a reporter for the local Spanish-language newspaper al Dia, roamed the arena looking for Latinos, studying the faces in the crowd. She approached a woman in a short, tight dress covered in paper printouts of Trump photographs. "Are you Hispanic?" she asked.

"Of course not!" The woman said.

"He's really speaking about change," said Saenz, who was born in Texas to a Mexican father.

"I feel the need to protect the border," Torres said.

Trump spoke at length on a wide range of topics from a renegotiation of trade deals with China and Japan to a replacement of President Barack Obama's health care plan, drawing regular laughs and cheers although many attendees began getting up to leave about an hour into the speech.