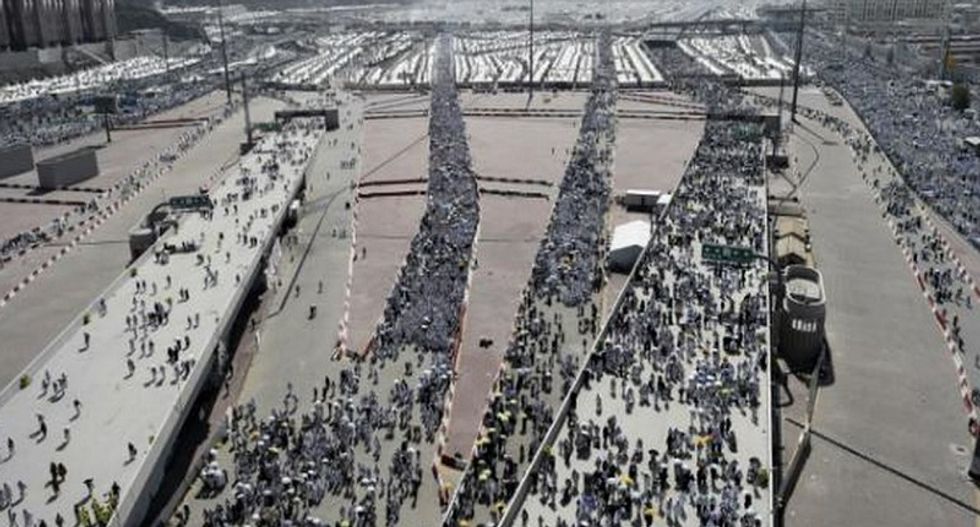 AFP/AFP - Muslim pilgrims arrive to throw pebbles at pillars during the "Jamarat" ritual, the stoning of Satan, in Mina near the holy city of Mecca, on September 24, 2015

Iran accused Saudi Arabia of grave safety errors after 90 of its citizens died Thursday in a stampede that killed more than seven hundred pilgrims during the annual hajj ceremonies.

After saying the kingdom was responsible for the tragedy, Deputy Foreign Minister Hossein Amir Abdollahian said Saudi's envoy to Tehran would be summoned to the foreign ministry.

The head of Iran's hajj organisation, Said Ohadi, said that, for "unknown reasons," two paths had been closed off near the site of a symbolic stoning of the devil ritual where the stampede occurred, asserting that such a step forced the crowd to form.

"This caused this tragic incident," he said on state television, later announcing the Iranian death toll on an evening news bulletin and on radio, adding that 60 more of his countrymen were injured.

The names of the first 43 Iranians killed in the stampede were earlier read out in a sombre live broadcast in Tehran by a spokesman for the hajj organisation.

Saudi's civil defence service has said at least 717 people were killed and 863 hurt.

Ohadi said the path closures had left only three routes to the area where the stoning ceremony was held in Mina, about five kilometres (three miles) from Mecca.

"Today's incident shows mismanagement and lack of serious attention to the safety of pilgrims," said Ohadi. "There is no other explanation. The Saudi officials should be held accountable."

Abdollahian also accused Saudi officials of "tactlessness" over the lack of safety measures at the hajj.

"We can in no way be indifferent to this irresponsible behaviour of Saudi Arabia. This will be dealt with through diplomatic channels," he said.

Saudi Health Minister Khaled al-Falih has blamed undisciplined pilgrims for the tragedy, saying it could have been avoided if they had "followed instructions."

Iran has set up a special headquarters at the accident site to support Iranian pilgrims.

"Saudi Arabian officials are responsible for this incident and they should immediately endeavour to take effective measures for managing the existing crisis and providing full security for pilgrims," Abdollahian told the official IRNA news agency.