It is now clear that the hippies won the culture war 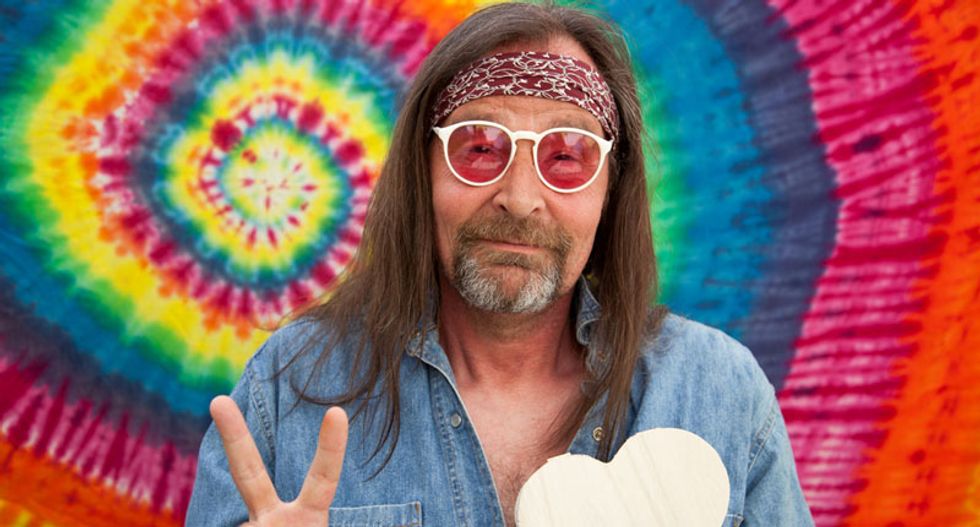 As blue jeans, beards, body adornments, natural foods, legal marijuana, gay marriage, and single parenthood have gained acceptance in mainstream American society in recent years, it is now clear that the hippies won the culture wars that were launched nearly fifty years ago. It was in the mid-1960s that one of America’s oddest social movements, the hippies, suddenly appeared. This counterculture of psychedelic drugs, rock music, and casual sex had its roots in the gargantuan size of the baby boomer generation, in youth’s churning hormones, and in the arrival of lysergic acid diethylamide (LSD or “acid”). The Sixties counterculture, its beliefs and practices, its odyssey into the Seventies, and its many legacies as it became integrated into mainstream culture help explain the United States today.

Hippies, almost all of whom were white and middle-class, owed a lot to the Beat Generation. In the Fifties the writers Jack Kerouac and Allen Ginsberg promoted an alternative lifestyle outside the middle-class “rat race.” Like the Beats, hippies smoked marijuana, grew beards, indulged in a lot of sex, and rejected mainstream values, but the new generation also marked itself as distinct. Taking LSD in prodigious quantities, freaks preferred rock to jazz and wore bright-colored clothes. Far more numerous than the Beats, hippies dominated entire urban neighborhoods, such as the Haight-Ashbury in San Francisco and the East Village in New York. Unlike the gloomy Beats, hippies were exuberant. Large numbers made these youthful rebels optimistic that the entire society would eventually join the counterculture, and in a way it did.

At the heart, the counterculture was about three things: a search for authenticity, an insistence upon individualism, and a desire for community. Although hippies disagreed about many things, they shared a desire to be authentic. Being true to one’s self meant rejecting middle-class culture in order to “do your own thing.” A spiritual search was often part of the quest. Deeply suspicious of both society and government, freaks embraced individualism as a true expression of authenticity. However, this attitude left hippies feeling isolated and lonely, which explains why the love generation sought community. In the mid-Sixties communes popped up in cities. By the early Seventies rising rents, racial tensions, and crime drove hippies “back to the land.” Self-sufficient agriculture was a hard transition for children of the suburban middle class. Most communes failed when trust funds, parental checks, or welfare payments ran out. Hippie women bore a lot of children. Rural communes did enable residents to sort out their lives.

Psychedelic drugs and rock music were accompanied by the explosion of easy sex. More casual sexual mores, however, had been going on in American society for a hundred years, as evidenced by the growing divorce rate. Hippies merely accelerated the process. They declared their parents to be hypocrites for preaching traditional values while having many affairs. Free love would not have happened without the birth control pill. First sold in 1960, it took several years before single young women gained access. Once the risk of an unwanted pregnancy plummeted, the double standard ended. Hippie men declared that everyone should have sex with whomever they wanted whenever they wanted. In practice, this turned out to mean that hippie men indulged themselves, while women ended up discarded, heart-broken, and depressed. Eventually, many hippie women came to see free love as a male sexual fantasy that did not meet women’s needs. Some hippie women became feminists.

Most freaks were heterosexuals, but the attitude that sex was “no big deal” allowed homosexual hippies to indulge in gay sex without coming out of the closet. In that way, the counterculture liberated gay men and lesbians, but this novel situation also produced anxiety. While hippie openness about sex invited homosexuals to leave the closet, many hesitated to do so because of harsh penalties that might be imposed by authorities. This ambiguous environment took a sudden turn toward gay liberation in 1969 when police busted the Stonewall Tavern, a well-known gay bar in New York’s East Village. Homosexuals astonished both the cops and themselves by fighting back. The counterculture’s freer attitude about sex had a lot to do with emerging homosexual openness.

The hippie relation to politics is a curious one. The fact that longhairs emerged just as the United States enlarged the Vietnam War in 1965 is probably not an accident, and the counterculture all but disappeared when Saigon fell in 1975. Freaks frequently shared the same views as radical activists. Both groups dressed alike, listened to the same rock music, and indulged in free sex. Hippies, however, were deeply suspicious of all authority and did not share the radical desire for bigger government. Freaks also thought that protests were a waste of time. Some had become disillusioned after participating in demonstrations. Of course, long hair mocked a war in which the military insisted that soldiers wear short hair. Refusing to consume mass-produced goods sneered at society.

Although the counterculture disappeared, it produced a cultural revolution over the long term. In the Seventies hippie communards developed the first solar panels to make electricity to run stereos off the grid. Another innovation was natural food. Communes produced pesticide-free fruits and vegetables, and urban co-op groceries, another hippie innovation, often stocked only natural foods. Finally, there is the strange legacy of the personal computer, which freaks conceptualized and invented. Apple co-founder Steve Jobs wanted to put a computer on every desk to undercut IBM and other giant corporations that had a computer monopoly in the Sixties. The first Apple was built in a computer hobby club in Menlo Park, California just a couple of blocks from where Jerry Garcia had lived only a few years earlier when he had created the Grateful Dead. It is not an accident that San Francisco gave birth both to LSD space cadets and to the high tech wizardry of Silicon Valley. At times the past must be cast aside to see the future clearly. The Sixties proved to be just such a decade in America’s long-term cultural transformation.

By W. J. Rorabaugh, a professor of History at the University of Washington in Seattle and the author of American Hippies (Cambridge University Press), which offers a brief overview of the Sixties counterculture and its legacies.