'It was painful': Bernie Sanders tells CNN that GOP debate was so bad he had to turn it off 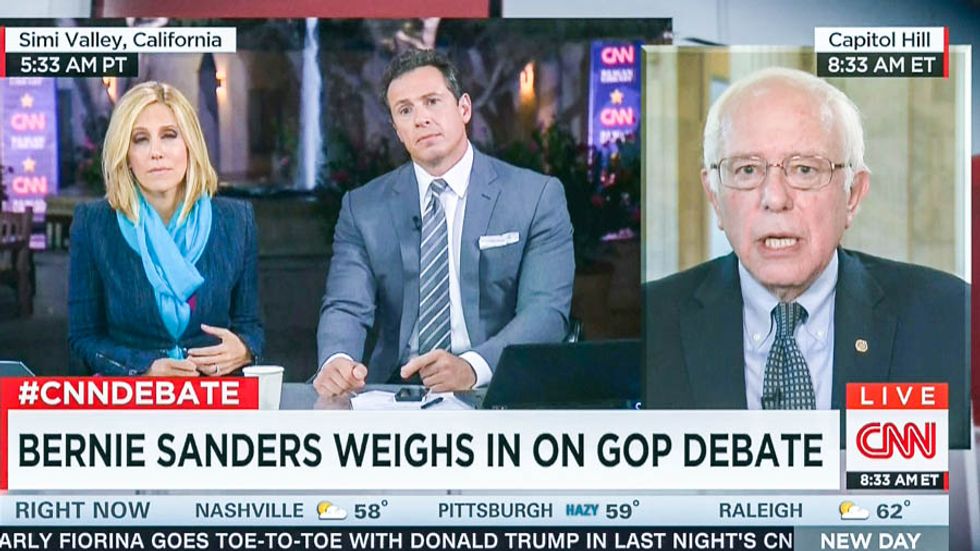 Democratic presidential candidate Bernie Sanders explained to CNN on Thursday that Wednesday's Republican presidential debate had been so "painful" that he could not finish watching it.

Although Sanders live-tweeted much of the CNN's debate, he said that he finally gave up fact checking after two and a half hours.

"It was really painful," Sanders told CNN's Chris Cuomo during an appearance New Day. "I have to say, I couldn't go on the full three hours. I gave up after two and a half."

"What was really remarkable is the degree to which they avoided the major issues facing the American people and believe every single problem facing humanity is all attributed to Barack Obama," the candidate noted. "We seem to have forgotten that when Bush left office, 800,000 people were losing their jobs every single month, the world's financial system was on the verge of collapse and our deficit was a record-breaking $1.4 trillion."

"I did not hear anybody say, 'Oh, this is a planetary crisis, we have got to do something.' Really? The federal government should not do something?" the Vermont senator asserted. "No scientist that I know believes that."

"I didn't hear a word about the need to address the fact that 40 percent of African-American kids in this country are living in poverty," he continued. "Nor did I hear a word, by the way, about racial justice."

As for GOP hopefuls who attacked him for being a socialist, Sanders said that he was confident the American people could recognize the benefit of learning lessons from the successes of countries like Denmark and Sweden "where health care is a right of all people, where public colleges and universities are tuition-free, where their rate of childhood poverty is much, much lower than it is in the United States of America, where you have much more income and wealth equality."

"Why are we the only major country on Earth that doesn't guarantee paid family and medical leave so that when a working class woman has a baby, she's not forced to be separated from her baby and go back to work?" he asked.