Jorge Ramos clashes with Bill Maher: No human being is 'illegal' 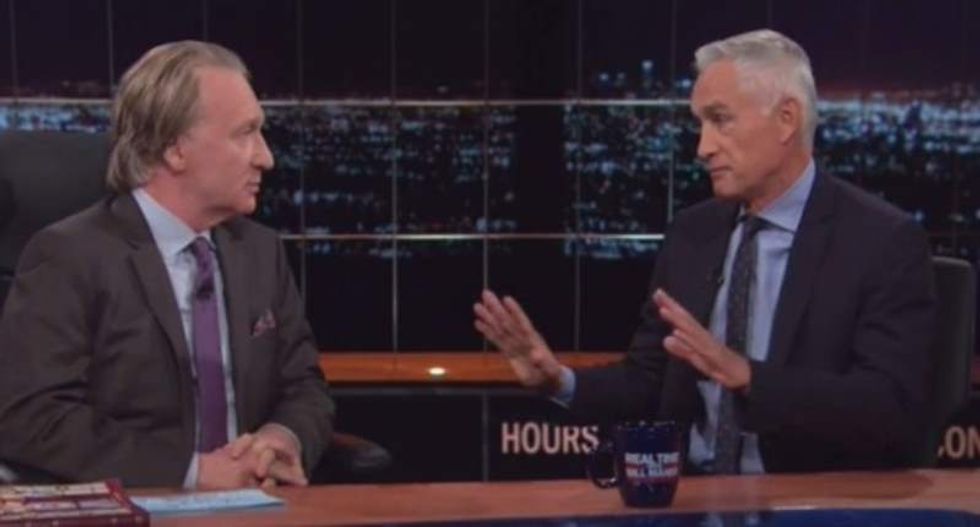 Real Time host Bill Maher was quickly corrected on Friday by Fusion anchor Jorge Ramos when he referred to undocumented immigrants as "illegals" while Ramos was recounting his contentious encounter with Donald Trump.

"He didn't like the question," Ramos said of Trump. "And instead of allowing me to continue, he called a bodyguard and pushed me out of the press conference. The lesson is, you cannot really ask a question with a bodyguard in front of you."

"You also pointed out that most illegals come here by plane," Maher replied, prompting Ramos to touch his arm and say, "Don't call them 'illegals.'"

"Sorry, transgender," Maher said, glancing back toward his other panelists. While the audience started laughing, Ramos told him, "No human being is illegal." He added, "Words matter. Very important."

"I mean, some people are illegal," the host countered. "Why is that a bad word?"

After conceding that there was a double standard, Maher did say he had anecdotal evidence showing that immigrants are less likely to engage in crime.

"I notice in my neighborhood, the way the Mexicans drive? Perfectly," he said.

"We learn in Guatemala City and Mexico City," Ramos replied.

"No, because they cannot afford to f*ck with law enforcement," Maher continued. "So they drive perfectly. Whereas the white people? They'll do anything."