Kim Davis explains why she just won't go away: 'If I resign I lose my voice’ 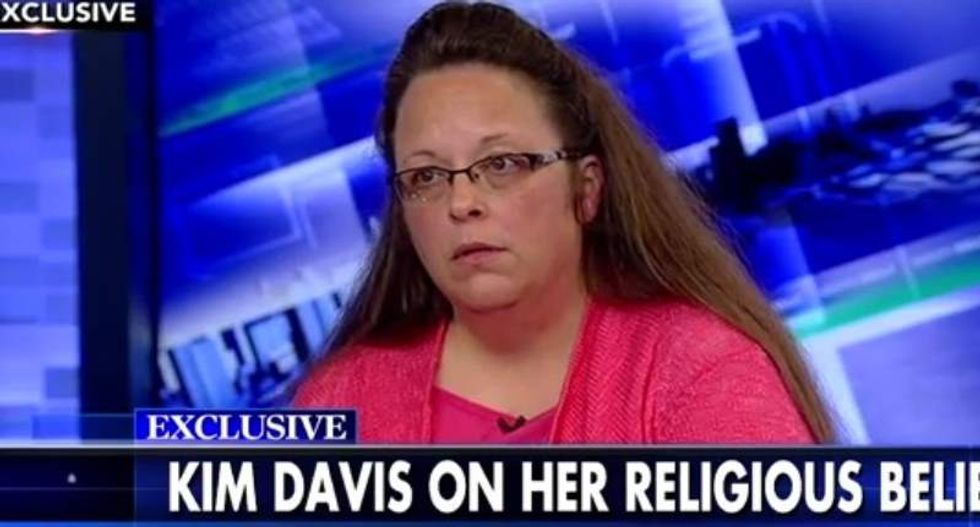 Rowan County, Kentucky clerk Kim Davis remained insistent that she was right in denying marriage licenses to same-sex couples during an interview on Wednesday with Fox News host Megyn Kelly.

"When the legal challenges ended up not going in your favor, many people have asked, why not just resign at that point?" Kelly asked.

"If I resign I lose my voice," Davis replied. "Why should I have to quit a job that I love and that I'm good at? I've been a county employee and served the public well for over 26 years before I got elected. It comes back to, they can accommodate for all sorts of issues, and we ask for one simple accommodation and we cannot receive it."

The interview aired hours after a federal judge rejected Davis' request for a stay on the order imposed upon her to issue the licenses regardless of sexual orientation.

Davis has attempted to work around Judge David Bunning's ruling by removing her name from a new set of license issued by her office, but lawyers for couples married in the county have argued that doing so may have invalidated them under state law.

Despite this, Davis told Kelly that "it has never been a gay or lesbian issue" for her.

"It has been about upholding the word of God and how God defined marriage from the very beginning of time," she insisted.

The clerk also said that she and her husband have gotten "hate emails" for their public opposition to marriage equality.

"How do you think you've come out of it today: villain or heroine?" Kelly asked.

"It just depends on if you love God or not, which side I'm on" Davis responded.

Watch footage from the interview, as posted online on Wednesday, below.