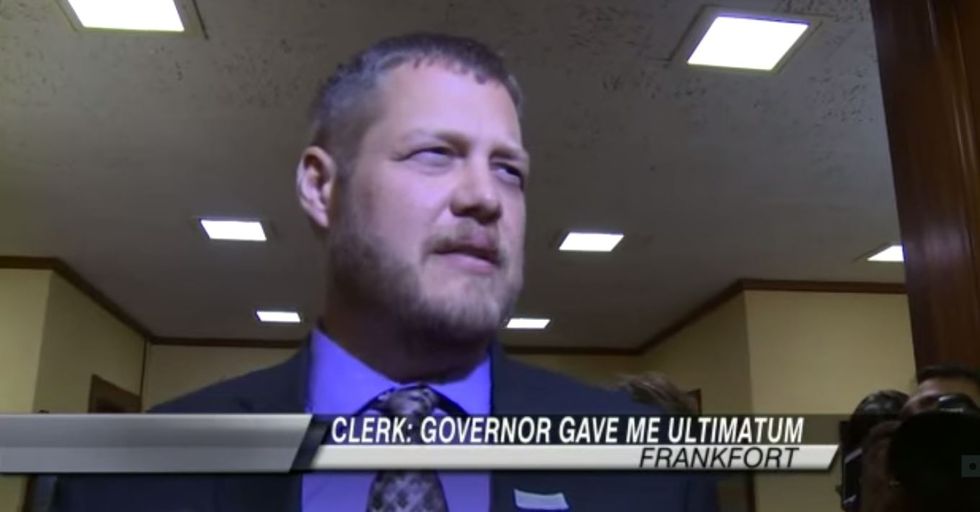 Several states have adopted religious objection laws allowing clerks to recuse themselves. But experts warn that this approach may be unconstitutional

Marriage officiants in several states are quietly refusing to wed same-sex couples by dropping out of the business altogether, a strategy that could test the limits of the US constitution.

The most high-profile public official to skirt performing marriages is Kentucky clerk Kim Davis , who refused to issue licenses to same-sex couples under “ God’s authority .” Her deputies are now performing the duty. Most other officials who once refused to marry same-sex couples dropped their opposition after enforcement of the US supreme court’s landmark ruling in June.

Now, in North Carolina, Alabama and other states, officiants have opted out of marrying both gay and straight couples to express moral opposition to the court’s decision.

But some legal experts believe government officials can’t stop all marriage to avoid wedding same-sex couples without running afoul of the constitution.

In North Carolina, 32 of the state’s 672 magistrates have excused themselves from marrying couples altogether, once a duty of the office, to avoid marrying same-sex couples. Magistrates opted out as early as June, when a new religious objection law was passed. The law allows magistrates to refuse to perform a marriage, but once they do so they are then barred for performing any other marriage for six months.

In at least one county, rural McDowell in the western part of the state, all four county magistrates have opted out of marriage, requiring a magistrate to travel from a nearby county to perform marriages 10 hours per week.

In Alabama, 10 of the state’s 67 counties stopped issuing marriage licenses entirely, according to LGBT rights advocates Human Rights Campaign. Some of those recusals stem from Alabama judges’ refusal to issue marriage licenses that began before the US supreme court’s legalization of gay marriage this June.

Even some advocates said these counties are not discriminating if neither same-sex nor opposite-sex couples are being served. A spokesperson for Freedom to Marry, which fought to legalize gay marriage, said that because Alabama’s counties have recused themselves from all marriage, “We don’t see this as discrimination.”

Similarly, a religious objection law in Utah has allowed county clerks to stop solemnizing marriages, but still requires them to issue marriage licenses. That law has been praised for its balance of religious objections and LGBT rights, though it still stopped clerk’s office solemnization in two counties .

“While I issue every marriage license as a legal obligation without personal judgment, my conscience does not allow me to voluntarily officiate a same-sex marriage,” said Ricky Hatch, the clerk of Weber county, Utah, who stopped solemnizing marriage in his office.

“My decision does not prevent the marriage from taking place, but I am also not personally promoting the practice. I should also mention that the decision to not perform marriage ceremonies in our office applies equally to all couples,” Hatch said.

Franke compares the public officials’ opting-out to that of a firefighter who believes abortion is a sin. If that firefighter arrives at the scene of a fire at an abortion clinic, he or she cannot say, for example, “‘Oh no, I’m not going to fight that fire – I see this as God’s wrath, someone else needs to go instead of me,’” said Franke.

“Religious liberty rights end up shifting a cost to other parties, whether it’s the public or other public officials – that’s gone too far,” said Franke.

It’s not North Carolina’s first marriage battle – in a similar situation in 1976, magistrates in Winston-Salem refused to wed Carol Ann and Thomas Person , because Carol Ann is white and Thomas black.

“I am a church-going Christian … But even if my faith were different, if I worked for the government, I would know that I have to treat all members of the public equally, regardless of my religious views,” Carol Ann Person wrote in the News & Observer . “Government employees aren’t working a religious job; they take an oath to serve all the public, and they’re supposed to be impartial.”

Franke believes North Carolina’s law is unconstitutional, and some courts appear to agree that the practice is not legally supported.

An August opinion from the Ohio supreme court found: “A judge may not decline to perform all marriages in order to avoid marrying same-sex couples based on his or her personal, moral, or religious beliefs.”