King of Clubs: A new twist in the origin of the ankylosaur's powerful tail 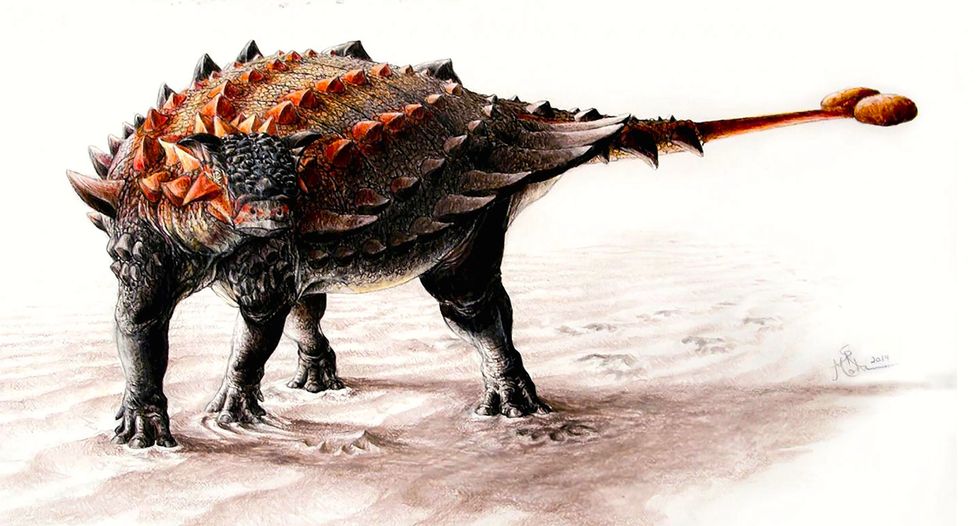 Gobisaurus (top) compared with Ziapelta, an ankylosaur with a fully developed tail club, as seen in an undated illustration courtesy of Victoria Arbour. REUTERS/Victoria Arbour/Handout

One of the most impressive weapons to appear during the dinosaur arms race of the Cretaceous Period was the big bony tail club wielded by some members of a group of tank-like plant-eaters.

A new study provides a step-by-step account of the evolution of this distinctive feature possessed by the heavily armored dinosaur Ankylosaurus and its cousins, a bludgeon that may have given even the ferocious Tyrannosaurus rex reason to worry.

The researchers studied fossils of the group called ankylosaurs including early, primitive species with no tail club and later ones with a fully developed one.

Ankylosaurs began to evolve tail clubs much earlier than previously thought, the researchers found, and the clubs evolved in two steps over tens of millions of years.

First, vertebrae in the back part of the tail changed so that the tail became stiff. Next, bones that form in the skin to provide body armor, called osteoderms, became very large at the tip of the tail and completely enveloped the tail's end to form a club that could be swung at an enemy.

Ankylosaurs lived at a time when the largest land predators in Earth's history including T. rex roamed the landscape, dismembering other dinosaurs with powerful jaws and serrated teeth. In an arms race, some plant-eaters developed defensive weaponry.

"A tail club was definitely an effective weapon and could have broken the ankle of a predator," said paleontologist Victoria Arbour of North Carolina State University and the North Carolina Museum of Natural Sciences, who led the study published this week in the Journal of Anatomy.

"But in living animals today, weapons are also often used for battling members of your own species – consider the horns of bighorn sheep or the antlers of deer – so perhaps ankylosaurs did something similar."

Ankylosaurus, measuring around 20 feet (6 meters), was the largest and last of the ankylosaurs, living at the end of the age of dinosaurs about 65 million years ago.