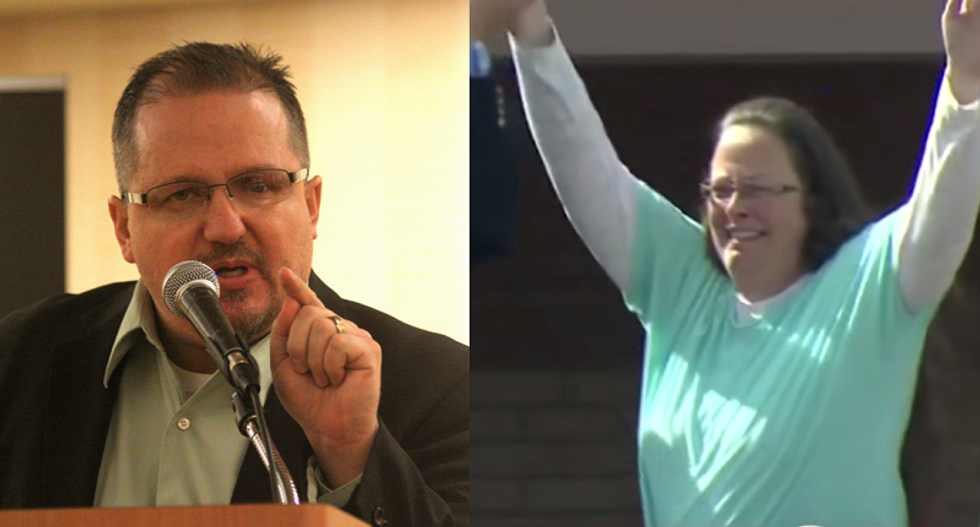 The Oath Keepers, an armed, camouflage-wearing volunteer militia famous for hunkering down at Bundy Ranch, now say they have "boots on the ground" to protect Kentucky clerk Kim Davis, who they believe was denied her right to a jury trial.

Davis, the elected clerk of Rowan County, has become the current celebrity of the anti-gay movement for staunchly refusing to issue marriage licenses after the Supreme Court’s Obergefell v. Hodges ruling in June legalized same-sex marriage nationwide. After defying the highest court and subsequent court orders to issue the licenses, a federal judge held her in contempt and jailed her.

In a teleconference uploaded to YouTube, Oath Keeper founder Stewart Rhodes discussed the operation with Kentucky sheriff Denny Peyman, Missouri Oath Keeper John Karriman, and West Virginia Oath Keeper Allen Landieri. The group claimed that their new mission had nothing to do with same-sex marriage and insisted they were only offering to guard Davis because the judge had acted illegally.

"People should consider her under our protection," Rhodes says in the teleconference. "We'll make sure that our people are keeping a close eye on the situation and we're going have boots on the ground to keep watch regardless, because this judge needs to understand that he's not going be able to just go grab this lady whenever he feels like it."

In a press release published on their website, the group says they have been in contact with Davis’ attorney, Mat Staver, and are acting because Judge David Bunning “grossly overstepped his bounds and violated Mrs Davis’ due process rights, and in particular her right to a jury trial.”

Contempt of court is not a criminal charge or civil complaint that results in a jury trial or hearings. It's punishment for dismissing court authority, disobeying court orders or impeding the ability of the court to perform its function, according to Law.com. Contempt is determined by the judge overseeing the case. Fines or brief jail time are common sanctions.

In Davis case, she was slapped with a class action lawsuit by same-sex and straight couples who could not get married at the Rowan County Clerk's Office as a result of Davis' actions. Davis lost the case and was ordered to begin issuing marriage licenses. She filed all possible appeals and lost, yet still refused to issue marriage licenses, resulting in the contempt ruling.

The Oath Keepers do not seem to be aware of this key aspect of Davis' case, however. On their website, they say, "No one man should have that kind of power in his hands alone to decide guilt and impose a sentence of indefinite detention."

Davis spent less than a week behind bars.

"Now we see the rise of an imperial judiciary that not only legislates from the bench but is attempting to expand their 'contempt' power to likewise swallow up our Bill of Rights and circumvent jury trial," Rhodes wrote. "Both methods are used to allow the powerful office holder to merely point his finger and have his opponent thrown behind bars without a grand jury indictment and without being found guilty by a jury of their peers. No innocent until proven guilty before a jury. Just 'guilty' because the leader says so. That is a dictatorship, whether done by a president or by a judge."

In a separate video, Landieri insisted the group's actions have nothing to do with gay marriage.

"This has nothing to do with gay marriage," he said. "Now gay marriage is in the subject matter of this, but that is not the purpose of this. I have nothing against people's lifestyles at all. Only if those lifestyles are forced upon me."

Some have observed that it is Davis who is forcing her Christian beliefs on the general public vis-à-vis her capacity as elected county clerk.

Davis took an oath to uphold the Constitution of the United States when she took office -- but by refusing to uphold the adjudicated constitutional right of same-sex couples to marry, she is in violation of that oath.

The Oath Keepers have a history of intervening when the federal government tries to enforce laws the group disagrees with. The group was involved in an armed standoff with federal agents in 2013 while guarding Nevada rancher Cliven Bundy, who was illegally grazing cattle.

Earlier this year, the group created a bit of a circus at mines in Montana and Oregon when federal officials tried to enforce land use laws and mine operators called on the group to help.

Their motives have been questioned when they have turned up during civil unrest and uprisings led by African-Americans protesting law enforcement killings of black people, where instead of guarding protesters, Oath Keepers appeared to act more like de facto law enforcers.