O'Reilly: Polls showing Biden ahead of GOP candidates prove Americans are hooked on 'the machines' 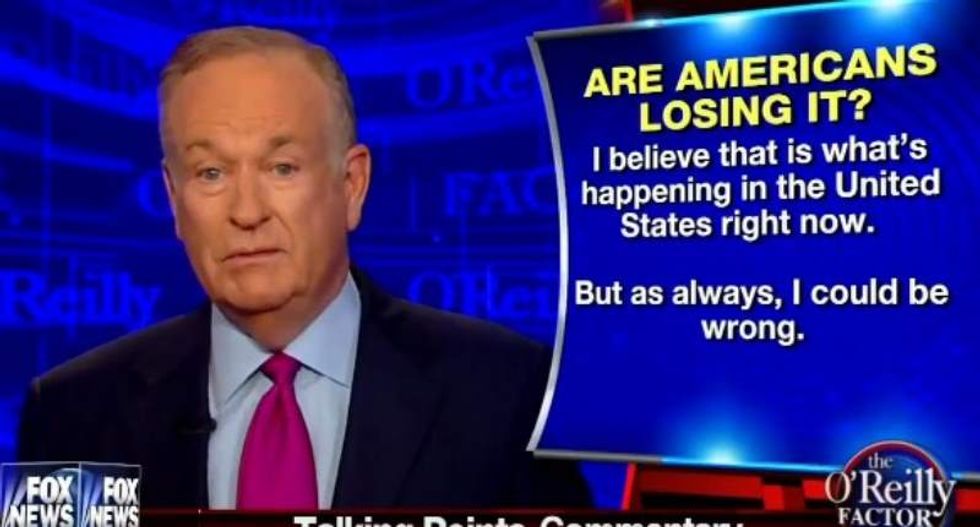 Fox News host Bill O'Reilly accused the American electorate of collective ignorance on Wednesday, saying that a recent poll showing support for Vice President Joe Biden if he ran in 2016 was proof.

"There's no question the machines have allowed the individual American to create his or her own world," O'Reilly said. "You don't have to live in the real world anymore; used to be drugs and alcohol obliterated reality. Now it's your handheld device, or your PC."

While Biden has not expressed an interest in running for the presidency, an NBC News/Wall Street Journal poll released on Tuesday showed that besides being viewed positively by 40 percent of respondents, the vice president was a more appealing candidate than anyone running for the Republican presidential nomination.

However, O'Reilly noted, the survey also showed that 62 percent of respondents felt the country was "off on the wrong track," which he said made no sense considering Biden "endorses" everything President Barack Obama does. The Factor host did not mention, however, that 47 percent of respondents approved of Obama's performance, a two percent increase from July.

"Many Americans are simply dumb. They don't know what's going on," O'Reilly concluded. "They don't pay attention. They don't care."

Watch O'Reilly's commentary, as posted online on Wednesday, below.