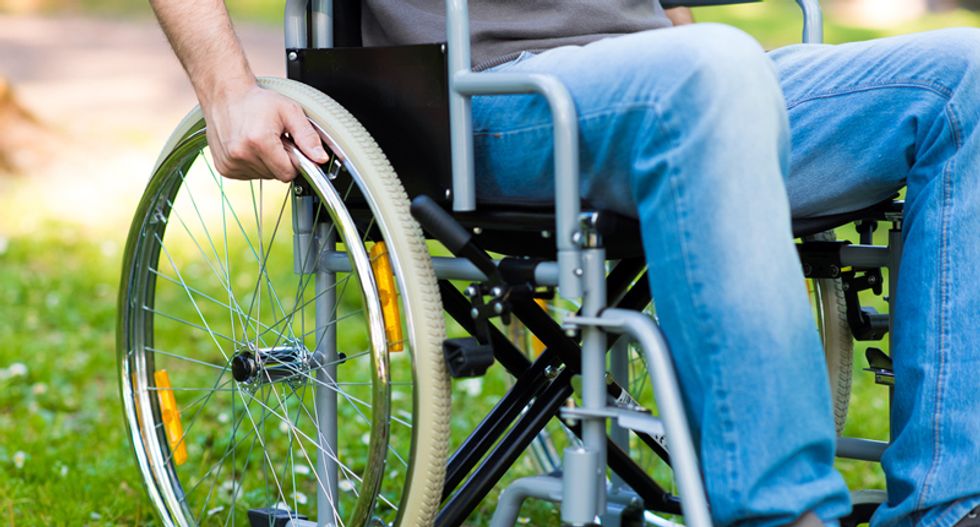 A young man uses a wheelchair in a park (Shutterstock)

American man, 26, completes 3.5-metre course thanks to computer system that reroutes signals from his brain to electrodes on his knees

A man who lost the use of his legs to a spinal cord injury has walked again after scientists rerouted signals from his brain to electrodes on his knees. The 26-year-old American was confined to a wheelchair five years ago after an accident left him paralysed from the waist down. Doctors said he was the first person with paraplegia caused by a spinal injury to walk without relying on robotic limbs that are controlled manually.

The man walked a 3.5-metre course after being fitted with an electrode cap that picks up brain waves and beams them wirelessly to a computer, which decipher the waves as an intention to stand still or walk. The relevant command is then sent to a microcontroller on the man’s belt, and on to nerves that trigger muscles to move the legs.

The patient needed intensive training to generate recognisable walking signals in his brain, and to learn how to use the device to put one foot in front of the other. He also needed extensive physical training to build up the muscle tone in his legs.

Related: Can a Kickstarter headset decipher the brain waves of 'locked-in' patients?

“Even after years of paralysis, the brain can still generate robust brain waves that can be harnessed to enable basic walking,” said Dr An Do at the University of California at Irvine, who co-led the proof-of-concept study.

“We showed that you can restore intuitive, brain-controlled walking after a complete spinal cord injury. This non-invasive system for leg muscle stimulation is a promising method and is an advance on our current brain-controlled systems, which use virtual reality or a robotic exoskeleton.”

The man learned to produce the right brain signals by moving an avatar around a virtual environment while he was sitting down wearing the cap, which has a built-in electroencephalogram (EEG) that monitors brain waves. When he had made sufficient progress, he practised walking for real while suspended 5cm above the ground, so that he could move his legs freely without having to support his weight.

On the patient’s 20th session, he used the system to walk on the ground, helped by a walking frame that prevented him from falling over. Over the 19-week course, he learned better to control the device and so the movement of his legs.

A spinal cord injury severs the nerves that carry signals from the brain to the limbs. The nerves do not grow back and often scar tissue forms at the site of the damage. The proof-of-concept device shows the potential for computerised systems that can read out signals from the brain, bypass damaged areas, and feed them back into the healthy nerves that control the muscles for walking.

Researchers at the lab stressed that they had only tested the brain-computer interface on one patient and that many more patients would be needed for trials before they could assess its more general usefulness for people with paraplegia. Details of the study are reported in the Journal of NeuroEngineering and Rehabilitation.

If the device works well in others, the electrode cap could eventually be swapped for a hidden implant that monitors brain signals from beneath the skull.

Zoran Nenadic, a colleague of Do’s at Irvine, said: “We hope that an implant could achieve an even greater level of prosthesis control, because brain waves are recorded with higher quality. In addition, such an implant could deliver sensation back to the brain, enabling the user to feel their legs.”

In their report, the scientists describe how the patient was able to conduct a “light conversation” with the test team while attempting to walk.

The scientists have a number of major hurdles to overcome before the device can be used to help paraplegics walk freely. In laboratory tests, the computer got confused when the patient was walking on the ground, potentially because brain signals for walking became mixed up with others for balance and stabilisation.

Another problem is the bulk of the system, which will need to be solved with smaller, implantable devices. Writing in the journal, the researchers say: “The cumbersome nature of the current noninvasive system makes its adoption for restoration of overground walking unlikely.

“This limitation can potentially be addressed by a fully implantable brain-computer interface system, which can be envisioned to employ invasively recorded neural signals.”