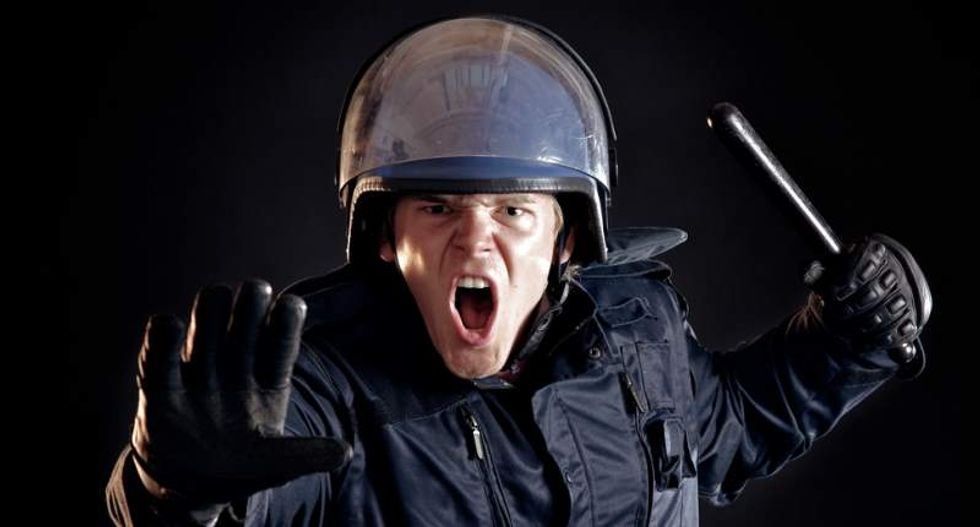 A Philadelphia police officer got an apology from coffee chain Starbucks after he ranted on Facebook about not being allowed to use one of their restrooms because the "blonde liberal" barista said he wasn't a paying customer, Philly.com reports.

Joe Leighthardt‎, another Philly officer, posted last week what happened on the Starbucks Facebook page, but didn't name the officer in question. The officer wrote:

So I walk into the Starbucks at 13th and Chestnut in full uniform and ask the young blonde liberal behind the counter if I could use their public bathroom for which you need a key code and she states, in a loud voice so all the other customers can hear that the bathroom is for paying customers only. I then ask in a very polite manner if I could please use it. She then states in the same loud manner and a smirk "Are you a paying customer?" It was at this point that I realized what she was doing. As I walked out with my hand up and while she continued loudly to tell me about the bathroom down the street, I was even more astonished that the many customers and other employees said nothing and seemed indifferent. This is the world cops live in anymore. It's hip for this generation to berate and totally disrespect cops in front of the public and praise cop killers as the heroes of they're (sic) time. I never post things but I hope my fellow brothers and sisters in blue see this and know that we have each other... and not to patronize that Starbucks.

The coffee chain quickly responded to the post, saying it's not the kind of experience they want customers to have, though the incident seems to have happened because the officer was not a customer.

"Hi Joe, thank you for taking the time to voice your concerns. We are aware of this situation, and it is certainly not in line with the experience we want any of our customers to have in our stores. We are taking all necessary steps to ensure this doesn’t happen in the future. Thanks!" a company representative wrote.

In the post, Leighthardt‎ wrote, "Thought you world like to know this happened at your 1301 Chestnut St in Philadelphia. In a time when police are being made the enemy, Your clerk pulls this nonsense. And might I point out, this store is a frequent caller to police for some sort of service."

Some who responded said that many restaurants allow firefighters and police officers to use their bathrooms regardless of whether they are paying customers.

"No one is asking for special treatment, but when your 'office' is a police car and you're running from job to job in Philadelphia, I'd he supposed to hold in? Pee on the sidewalk? I'll bet your job has a bathroom within 100 yards," Leighthardt wrote. "Cops don't. And this particular Starbucks calls the police several times a week for things as simple as someone sitting on the bench outside their property."

Some however, took issue with the tone of the officer's post.

"The problem I have is the assumption that the rude young woman behind the counter was a 'liberal' and the implication that being liberal is directly connected with a disrespect for police and authority," wrote Michael Cleary. "I'm a pretty liberal guy but I have always had the utmost respect for people who put their lives on the line to protect and serve the rest of us."

Another poster was angered by the officer's tone. Wrote Normar Juniors:

"Hopefully, this officer is suspended without pay! Stereotype much...young blonde liberal? Embellish much...please name the cop killer she praised as you walked out the door? Passively threaten much, '...this store is a frequent caller to police...'? After this post, do you think the other uninvolved employees of Starbucks are confident that the Philly PD will arrive in a timely manner next time they are summoned? Don't think so! All you've done with this post is enforce what some in the public already believe; the abuse of police power via lies, threats, and stereotypes must stop.

One woman laid into the employee and Starbucks for backing marriage equality.

"To the parents of this cashier at 1301 Chestnut Street Starbucks in Center City Philly, you raised a disrespectful little brat," wrote Barbara O'Donnell. "Starbucks backs gay marriage, is anti Christian, condemns law enforcement. I can find no reason why I walk into this business."

Another simply wrote: "Of course the police didn't get their way so they resorted to bullying tactics."

Starbucks officials said they have apologized "personally' to the officer, Philly.com reports.

Philadelphia cops last made national news in August when Officer Matthew Zagursky was put on desk duty after being caught on video threatening to impound a man's car unless he bought tickets to a police union fundraiser.

While some politicians and in law enforcement have spoken about a "war on police officers," 2015 so far has the second lowest number of murdered police officers in decades, at 35, the Washington Post reports. Police officers have killed 844 people so far this year, according to tracking website Killed By Police.