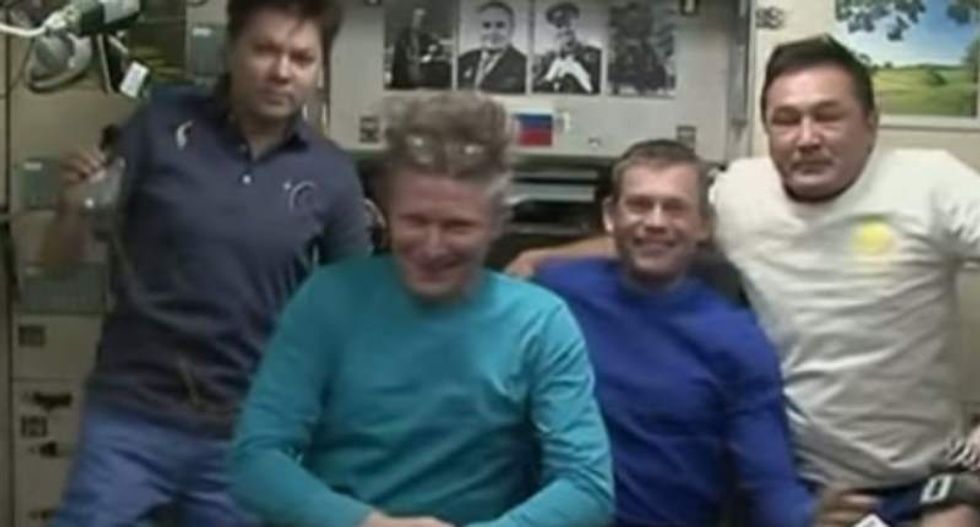 A Russian Soyuz capsule carrying the world’s most experienced space flier and two rookie crewmates returned from the International Space Station on Friday, with a pinpoint parachute landing in Kazakhstan, a NASA TV broadcast showed.

The capsule departed the station at EDT/2139 and touched down at EDT/0051 southeast of Dzhezkazgan, Kazakhstan.

Strapped inside was former station commander Gennady Padalka, 57, returning from his fifth spaceflight with a record 879 days in orbit. The previous record was set by six-time flier Sergei Krikalev, who has a career total 803 days in space.

Joining Padalka for the ride back to Earth were two rookies, Kazakh cosmonaut Aidyn Aimbetov and Danish astronaut Andreas Mogensen, both of whom spent less than 10 days in orbit.

“There definitely hasn’t been time to get homesick,” Mogensen, the first Dane in space, told reporters during an inflight press conference on Tuesday. “Time has really, really flown past.”

Mogensen and Aimbetov launched with Padalka's replacement, veteran cosmonaut Sergey Volkov, aboard another Soyuz capsule on Sept. 2. That flight was originally to have included British soprano and aspiring space tourist Sarah Brightman. Citing family reasons, Brightman stopped training in May and relinquished her seat to Aimbetov.

Volkov remains aboard the station, along with five crewmates, including newly named commander Scott Kelly, with the National Aeronautics and Space Administration, and Russian cosmonaut Mikhail Kornienko.

Kelly and Kornienko this week passed the halfway point of a planned year-long stay in space, the longest tour of duty in the station’s 15-year history.

“I expected this to not be easy. A year is a long time,” Kelly said. “You have to pace yourself.”

NASA and Russia are using the year-long mission to get better insight into how microgravity affects human physical and mental health, and what countermeasures may mitigate any harmful effects.

In a decade, NASA intends to begin flying astronauts farther beyond the space station, a $100 billion research laboratory that orbits about 250 miles (400 km) above Earth. The long-term goal of the U.S. space program is a human expedition to Mars in the 2030s.

Watch footage of the Soyuz crew leaving the space station, as posted online on Friday, below.