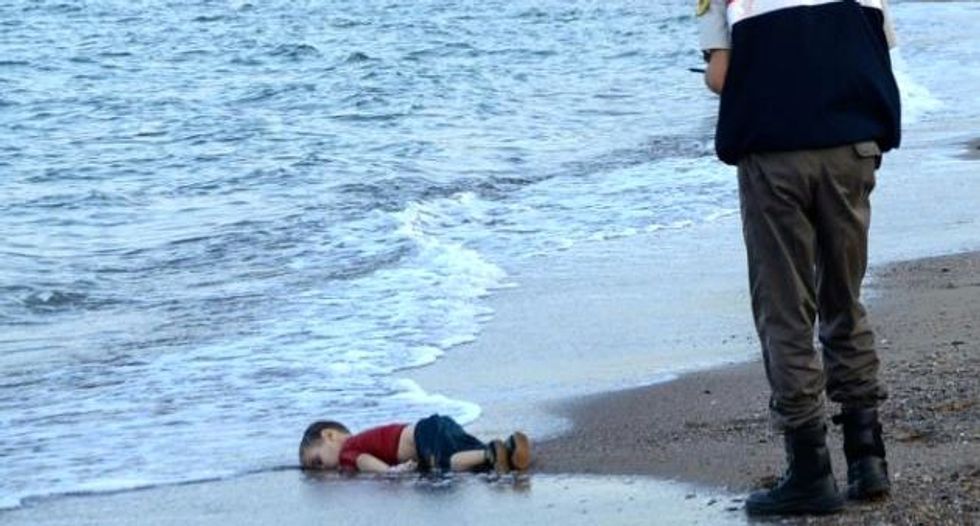 AFP/Dogan News Agency/AFP - A Turkish police officer stands next to the body of a migrant child on the shores in Bodrum, southern Turkey, on September 2, 2015 after a boat carrying refugees sank while trying to reach the Greek island of Kos

The image of a toddler's lifeless body washed ashore on a Turkish beach after a migrant boat sank sparked horrified reactions Wednesday as the tragedy of Europe's burgeoning refugee crisis hit home.

The body of the little boy could be seen lying face down in the sand near Bodrum, one of Turkey's prime tourist resorts, before he was picked up by a police officer in photographs taken by the Dogan news agency.

The hashtag "#KiyiyaVuranInsanlik" ("Humanity washed ashore") made it to Twitter's top world trending topics after the image was widely shared.

"The harrowing image that shows the true tragedy of the refugee crisis," read a headline in Britain's Daily Telegraph, while the Guardian said the photo "brought home" the horror of the situation.

"If these extraordinarily powerful images of a dead Syrian child washed up on a beach don?t change Europe's attitude to refugees, what will?" The Independent said.

The Huffington Post's UK edition said: "Do Something, David" -- a reference to Prime Minister David Cameron who has pursued a hard line against migrant arrivals.

The image appeared on the website of Spain's El Pais, El Mundo and El Periodico, which titled the photo "The drowning of Europe".

In Italy, the La Repubblica daily tweeted the image saying: "One photo to silence the world."

The boy is believed to be one of at least 12 Syrian migrants who died trying to reach Greece when their boats sank in Turkish waters.

The Turkish coastguard said two boats had sunk after separately setting off from Turkey's Bodrum peninsula for the Greek Aegean island of Kos early Wednesday.

The corpses of 12 migrants, among them five children and a woman, were found and 15 others were rescued, some surviving by reaching the shore in life jackets.

The coastguard, backed by helicopters, was continuing its search for three people still missing, a statement said.

Dogan said most of the refugees were from the Syrian Kurdish town of Kobane who fled to Turkey last year to escape violence by Islamic State (IS) extremists.

Over the last week, there has been a dramatic spike in the numbers of migrants -- mainly from Syria,Afghanistan, Pakistan and Africa -- seeking to leave Turkey by sea for Greece in the hope of finding new lives in the European Union.

This week, the Turkish government said the coastguard had rescued over 42,000 migrants in the Aegean Sea in the first five months of 2015 and more than 2,160 in the last week alone.

A coastguard official told AFP around 100 people had been rescued by Turkish rescue teams overnight as they tried to reach Kos.

The United Nations refugee agency UNHCR says more than 2,500 people have died trying to cross the Mediterranean so far this year.

Migrants, many of whom have paid over $1,000 to smugglers for the risky passage, are taking advantage of the calm summer weather which makes this the best time for the crossing.