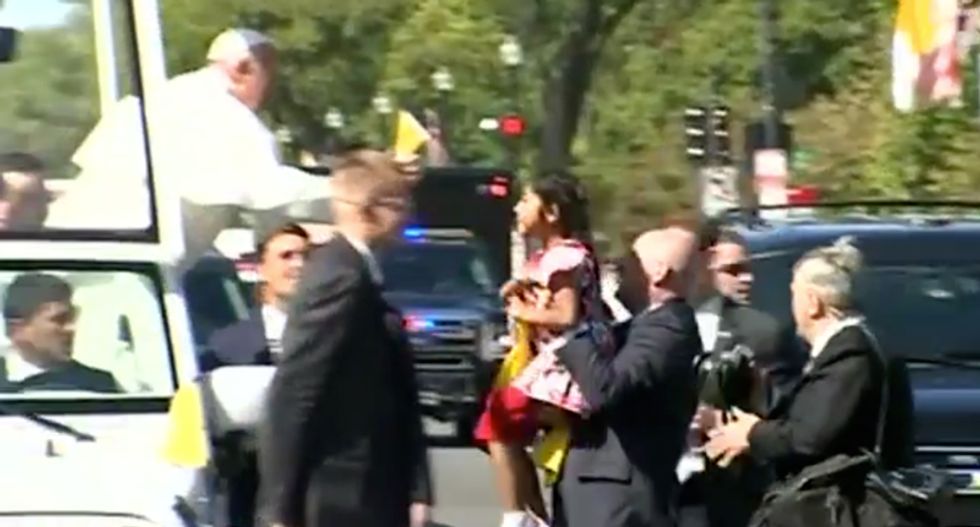 Five-year-old Sophie Cruz went to Washington with a letter for Pope Francis.

Like thousands of people on Wednesday, she waited anxiously for the “people’s pope” to pass by on the National Mall. Francis had said he wanted to step out of the popemobile, spontaneously, and greet the American people. But he hadn’t; the security threat was too great, the barriers too many.

As Francis passed, Sophie slipped past the barricade and started to walk toward the popemobile. The security guards stopped her in her tracks.

But then the papal procession stopped, too; suddenly, the pope beckoned the little girl. A guard carried Sophie to Francis, and the “son of an immigrant family” – as the pope boldly called himself next to Barack Obama earlier in the morning – embraced the daughter of another immigrant family, in the middle of the street, in a moment instantly beamed across the world.

But beyond the very public hug, Sophie’s letter carried its own secret message: she traveled with her father Raul and other immigration activists to Washington to see the pope – and push for immigration reform.

Like millions of other Americans living in the US, Sophie lives with the fear that she will one day be separated from her parents because they hold different immigration statuses.

Her parents immigrated illegally to Los Angeles from Oaxaca, Mexico. Sophie was born in the US, and she calls herself an “American citizen with Mexico roots”.

Her letter, handed to Francis by security after their embrace, asked him to call on US lawmakers to pass comprehensive immigration reform so she and her family could stop living in fear of deportation.

“I want to tell you that my heart is sad,” Sophie said, reciting to the Guardian from memory the letter she had memorized in Spanish and English, moments after meeting the pope.

“I would like you to ask you to speak with the president and the Congress in legalizing my parents because every day I am scared that one day they will take them away from me.”

Francis’s efforts to focus the church on the poor and the marginalized has given hope to many immigrant communities here in the US and around the world that his message which reach the political leaders who ultimately determine their fates.

“The pope’s an immigrant, so he understands our plight,” said Martha Jauregui, another member of Hermandad Mexicana Transnacional . “He’s in the particular position to touch people’s hearts.”

The popemobile headed toward the church. On the other end of the National Mall stood the US Capitol building, where Francis was expected to deliver Sophie’s message to the members of Congress, in their house, on Thursday morning.

Watch video of their encounter below: