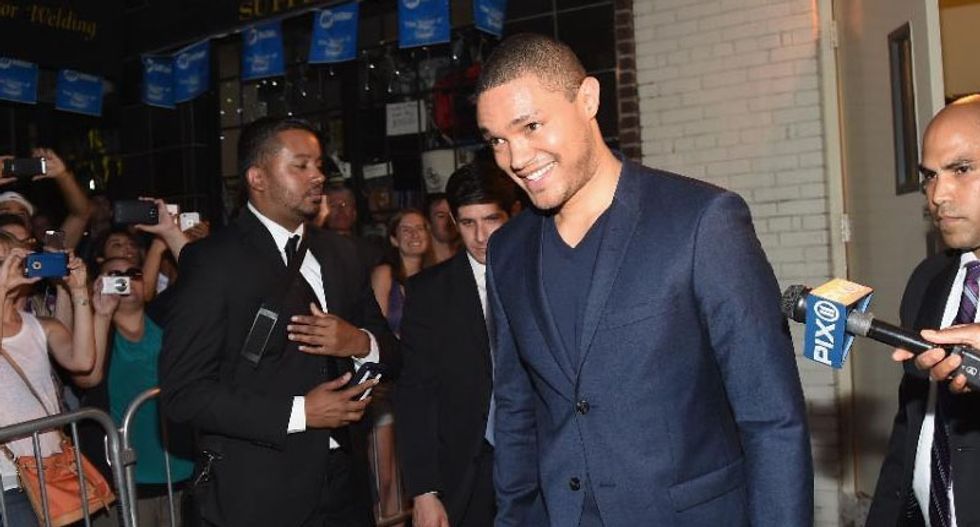 South African comic Trevor Noah on Monday will try to fill some gigantic shoes when he takes over as host of "The Daily Show," replacing award-winning satirist Jon Stewart.

Stewart turned the four-times-a-week show into a unique cocktail of politics, journalism and entertainment that skewered politicians, the world in general and sensationalist cable news coverage in particular.

He was loved by liberals as a voice of reason and distrusted by conservatives for his left-of-center perspective.

The 52-year-old Stewart -- considered clever, biting and very, very funny by his many fans -- retired from the show on August 7 after a 16-year run on the Comedy Central network.

Stewart became such a towering figure in the competitive world of late-night American TV comics that he landed President Barack Obama as a guest no fewer than seven times. Stewart won more than 20 Emmy awards.

He was to welcome comedian Kevin Hart as his first guest. Later this week, Republican presidential hopeful Chris Christie is scheduled to appear.

Until being named to take over as the show's host, the 31-year-old was not well known in the United States. He has done stand-up comedy around the world but on "The Daily Show," he appeared as a contributor just a few times.

Some of Stewart's people will remain on the set, providing a degree of continuity for the show.

Noah, born and raised in apartheid-era South Africa of a mixed-race marriage, says he will try to give "The Daily Show" his own unique flavor.

Stewart told him to, he says.

"He specifically said: 'Make your show. Make your best version of it,'" Noah told the New York Times ahead of Monday's show.

"Jon's suggestions were very simple and yet very difficult to decipher. He's like a Jewish Yoda. He said to me: 'Make the best show that you feel needs to be made. And trust your discomfort.'"

Noah said he will try to broaden the horizons of the largely US-angled show, although Stewart did love to talk about foreign policy.

"I think, naturally, the show will be a representation of my interests, and the interests in the room," he said.

"We all live in America. But as America is increasingly learning, if a butterfly flaps its wings on the Chinese stock exchange, there's a good chance it affects America," he told the Times.

Noah has been dogged by criticism of Twitter posts he has made that some found offensive to women and Jews. He has had an account since 2009 and boasts more than 2.5 million followers.

Take this one from 2011: "Oh yeah the weekend. People are gonna get drunk & think that I'm sexy! - fat chicks everywhere."

Another, from 2009: "Almost bumped a Jewish kid crossing the road. He didn't look b4 crossing but I still would hav felt so bad in my german car!"

Noah says those tweets are from years ago and he has since changed.

"If you look back three years and you're not disappointed in who you were then, you're not progressing," he said this month in an interview with Entertainment Weekly.

People jump onto Twitter hashtag trends -- like those who bemoaned his tweets -- without really understanding what's going on, Noah said.

These days people live in a "world of faux outrage. It's hashtag this, hashtag that."

"Then you have an artificial inflation of what the problem is. All of the sudden you get all of these big scandals, but they're not big, because everyone is on the periphery of the argument," Noah added.