Space experts swoon for 'The Martian' despite inaccuracies 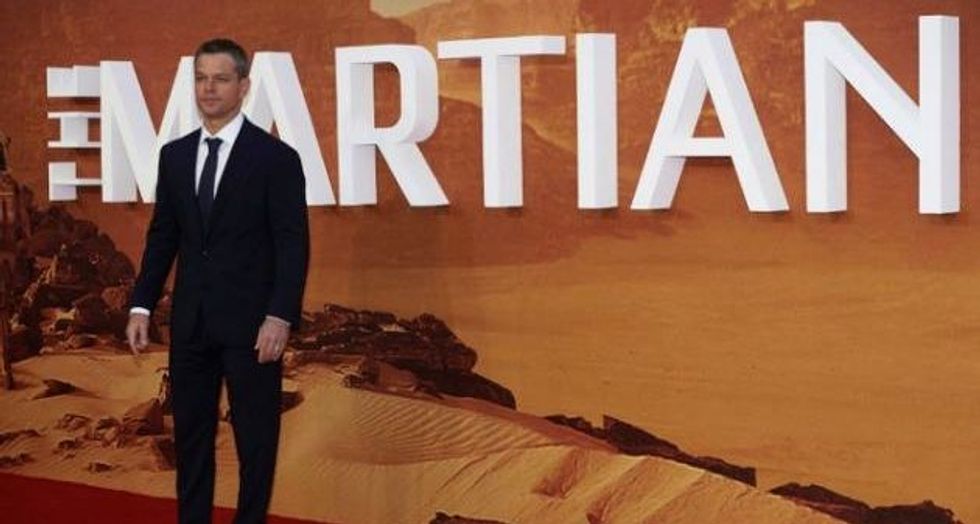 AFP/AFP - US actor Matt Damon arrives for the European premiere of "The Martian" in London's Leicester square on September 24, 2015

Scientists say new movie "The Martian" shows precisely what challenges astronauts will face on a pioneering mission to Mars, even though it contains some big inaccuracies right from the get-go.

Case in point -- the colossal storm that causes the crew to abandon the film's main character, botanist Mark Watney played by Matt Damon, would not have packed much of a punch on the Red Planet.

"The fundamental starting premise is completely incorrect," said Mars expert Scott Hubbard, a consulting professor in the department of aeronautics and astronautics at Stanford University.

Due to the thin atmosphere on Mars, wind speeds could only reach about half a hurricane's strength, and "would probably not be sensed by an astronaut -- let alone pose the sort of threat seen in the movie."

Still, Hubbard and others say they are fans of the story -- both the novel, written by Andy Weir, and the movie, directed by Ridley Scott -- because it brings to life the obstacles NASA must overcome as it strives to send humans to Mars by the 2030s.

In the movie, NASA is already there, landing an ethnically diverse crew on the Red Planet, where Damon's character accidentally gets left for dead with about a month's supply of food.

Facing the prospect of waiting four years until a spaceship could get back to him, he is constantly thinking about what could kill him and how to avoid it -- that is, when he is not dancing to the disco music left behind by his commander or vowing, "I am going to have to science the shit out of this," in order to survive.

"The thing we like about the movie is it shows how you think one, two, three steps ahead," said NASA astronaut Rex Walheim.

In the movie, which opens in the United States October 2, the stranded astronaut manages to grow a crop of potatoes, which he eats along with protein bars and vitamins in order to stay alive.

When his character is feeling glum, after running out of ketchup, he crushes up the painkiller Vicodin and sprinkles it on his potatoes.

At one point, Damon proclaims himself the greatest botanist on the planet, which is true since he is the only one.

But when he brags that he grew hundreds of potatoes in his "own shit," he takes a bit of creative license, said Bruce Bugbee, director of the plants, soils and climate department at Utah State University.

"You would never put raw sewage on plants," said Bugbee, noting that his waste would have to be composted first to kill off any harmful bacteria.

Otherwise, Bugbee said it is true that scientists on Earth have figured out how to grow plants in harsh environments, as well as split carbon dioxide (CO2) in order to get oxygen, and to split water (H2O) to get oxygen.

What is missing is an experiment to test these techniques in a long-term Mars simulation on Earth, by sealing people off in an area with no outside oxygen or water and only their own tools for growing food and recycling waste.

That hasn't been done in the United States since the Biosphere 2 project in the 1990s.

There is a year-long NASA-funded Mars simulation under way in Hawaii, but its focus is primarily crew psychology, not building a self-sustaining food system.

"We do know how to do everything. The challenge is practicing," said Bugbee.

Retired NASA astronaut Leroy Chiao said he tried to leave his "technical hat" at the door when he saw the movie.

But there were a couple of scenes that were "implausible and too much," he said.

One involved an astronaut puncturing a glove to devise a thruster. The other came when a crew member crafted a makeshift bomb that blew up just one part of the spaceship.

"There is no way either one would work!" Chiao said.

In scenes when Damon makes contact with the crew, he types and reads messages back in real time, when there would likely be a delay of many minutes to get messages to Mars and back.

Nor does the movie allude to the dangers of radiation in space, and the risk of cancer that would likely stalk the Mars pioneers if they made it back to Earth.

Not to mention that NASA is still working on the machinery to rocket humans to Mars. The US space agency has begun testing the Orion deep space capsule, but its first manned flight test may not be until 2023.

"I think the reality is that even if all those technologies were ready -- if the Orion was magically ready tomorrow -- we would be a no-go for launch because the human body is not yet ready for us to go to Mars," said Camille Alleyne of the International Space Station program science office.

But space policy expert John Logsdon said he expects the story will inspire young people to keep working on ways to get there.

"I think the bottom line of both the book and the movie is yes, it is worth doing," he said.