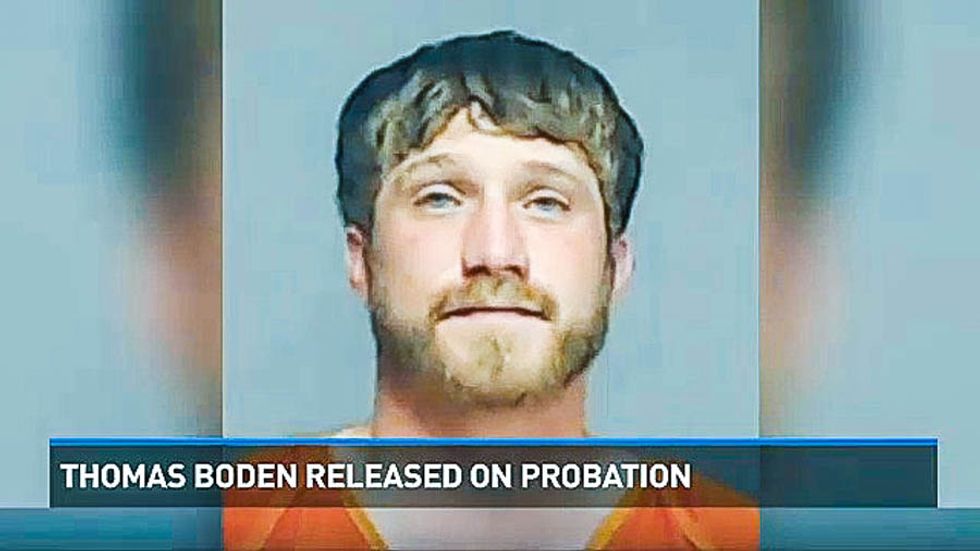 Activists in San Angelo, Texas this week were protesting after a local prosecutor's plea deal sent an alleged rapist home without jail time or requiring him to register as a sex offender.

In a Facebook post last week, Brittany Lynn Rosser explained that she called 911 in January because her boyfriend, 29-year-old Thomas Boden, was drunk and tried to force her to crash the car she was driving, telling her that they both needed to die.

Rosser said that by the time officers showed up at her home, her daughter was screaming, "My butt, my butt!"

"So I laid her down and opened her diaper to find an enormous amount of blood and a clear vaginal tear," Rosser wrote. "I asked Annabelle what happened and she said, 'Tom hurt me with his hand.' I ran outside screaming and crying, pushed past several cops and asked Thomas if he touches my daughter. He didn't say a word, but had a slight grin on his face."

According to Rosser, the hospital confirmed that her daughter had been sexually assaulted, and her 4-year-old daughter said that she had seen the attack.

"She told me Tom held Annabelle down on the floor holding a shirt over her face while she was screaming and 'cut' her private area with his hands," Rosser noted. "Later I searched the house and found another diaper and TONS of bloody wipes in the trash along with empty beer cans. All was taken into evidence with Thomas' DNA all over it. He never even tried to hide the evidence."

Although Boden was charged with Aggravated Sexual Assault of a Child, he accepted a plea deal of 10 years probation, and was ordered not to have contact with the victim. As part of the deal, Boden will not be required to register as a sex offender.

In a statement on Monday, Assistant District Attorney Jason Ferguson insisted that prosecutors did what was best for the child.

"In this case, we were dealing with a child who was 2 years old at the time of the offense, no adult witnesses, but serious injuries," Ferguson said. "When we were looking at our options, my primary concern was for the best interest of the child, including considering what going through the rigors of trial preparation and testimony in front of a jury would be like for a toddler."

The statement added: "The only witnesses to this offense were both toddlers – one was 2 and one was 4. The possibility of one or both of these children being unable to testify was extremely high, if not a certainty. If that were to happen, we faced the very real possibility that the Defendant would be found Not Guilty and simply go home with no consequences. That was something we could not risk."

Protesters who rallied in a park on Saturday and then in front of the Tom Green County Courthouse on Monday argued that the district attorney had not done enough.

Signs seen at the protest included “Justice system has failed us” and “It should not hurt to be a child.” Some protesters called for Ferguson's resignation.

Kassia Jaramillo told the San Angelo Standard-Times that “[t]en years’ probation is a slap on the wrist."

“This is a broader issue about how our society views sexual violence," Texas Association Against Sexual Assault (TAASA) spokesperson Rose Luna announced to protesters on Monday.

“Once you hear that, it absolutely makes your heart skip a bit. It makes you pause,” Luna observed. “It makes you say, 'Here we are in 2015, in a highly civilized society, yet we have no grand jury indictment of a child sexual assault on a 2-year-old child.'”

“We have high incidents of sexual assault cases, a low reporting rate, and when they do make it to the justice system, they’re pled out,” she continued. “This is not just a law enforcement issue, but rather a society issue.”

Ashley Springer, the victim's aunt, pointed out to KIDY last week that the district attorney never asked for the family's blessing before offering the plea deal.

“We were not contacted about it. We weren’t asked how we wanted this to be done,” Springer said. “If it was their daughter, it wouldn’t have been done like this.”