There is ‘no freedom from religion': Parents rally behind WA high school coach who leads post-game prayers 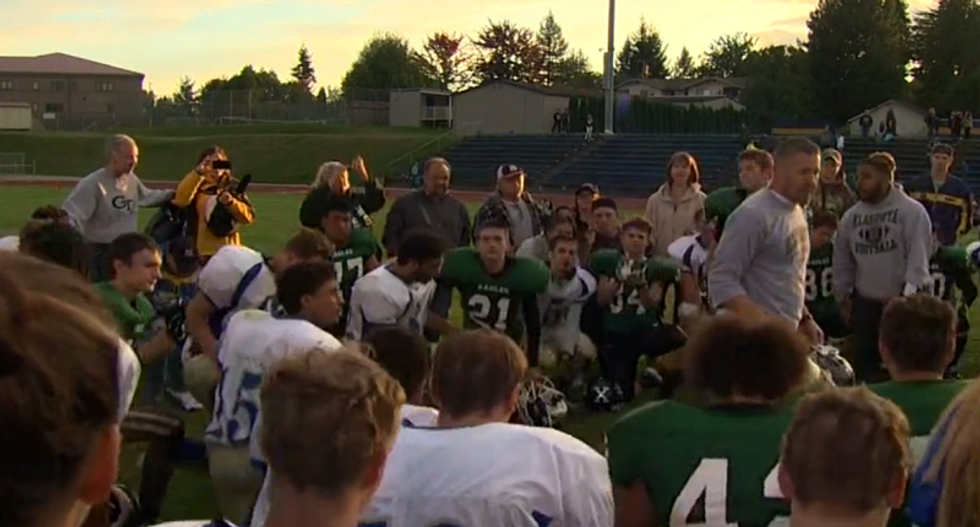 A Washington public school district is investigating a high school football coach for leading prayers after games, but the coach is continuing to pray.

Joe Kennedy, the coach at Bremerton High School told King5 that he has always prayed after games, and students have voluntarily joined him. He told supporters the district said he couldn't lead the players in prayer and he could be fired if he continued to do so. But that hasn't stopped him, and he hasn't been fired.

"I spent 20 years in the Marine Corps, and it's been about protecting the freedom of other people," Kennedy told King5. "It's about the freedom, and people can believe whatever they want. I'm just exercising my right. The game is over, and I just thank god for every one of these young men that are out here."

School district policy falls in line with the Constitution, barring the government from showing religious preference, stating "school staff shall neither encourage nor discourage" prayer. The district investigation is trying to determine what role Kennedy, as a school employee, plays in the prayer, because students are allowed to pray on their own as long as it isn't disruptive, King5 reports.

Students and parents are planning a rally supporting Kennedy on Friday, and in the meantime a Facebook page supporting him has been started.

"You can bet if the Muslims were out there praying, not a word would be said!!!! God bless you Joe Kennedy and I praying for you and the players. God is in control!" Marsha Arnold wrote.

"Keep praying Joe, the majority of the country is with you. We can't surrender to the tyranny of the minority. There is no such thing as a separation of Church and state, it isn't in the Constitution," wrote David Yow Leonhardt.

Other supporters had their own interpretation of the Constitution.

"It's freedom of religion, not freedom from religion," Bill Bailey told King5. "If they don't like it, they don't have to participate."

Watch the report from King5 here: