US Army Sergeant Bergdahl was not a Taliban sympathizer: general 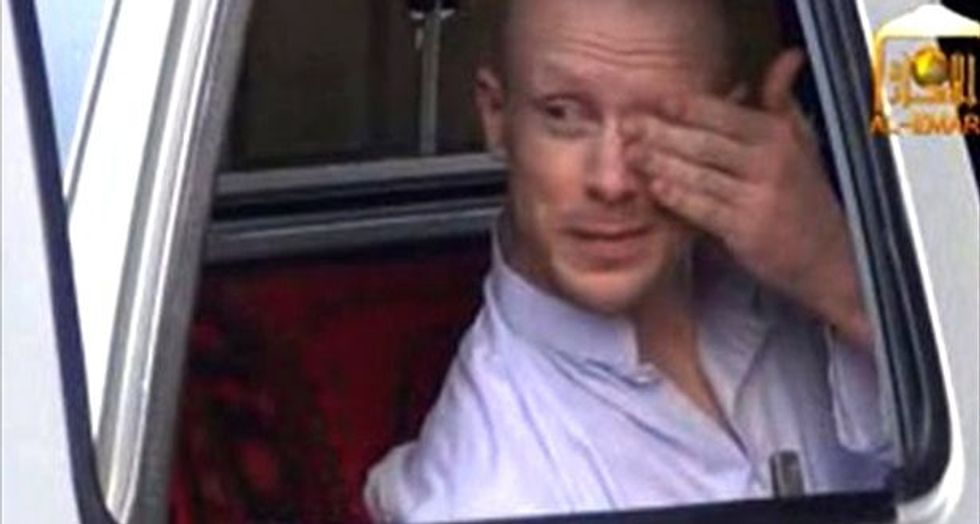 Image from video released on June 4, 2014 by Al-Emara reportedly shows US Army Sgt. Bowe Bergdahl before his release. (Agence France-Presse)

U.S. Army Sergeant Bowe Bergdahl was not a Taliban sympathizer, but an unrealistically idealistic soldier who left his post in Afghanistan to raise his concerns with a general officer over what he saw as problems with his unit's leadership, the officer who investigated his case said on Friday.

Bergdahl, who is facing a probable cause hearing on charges of desertion and misbehavior before the enemy, felt he needed to act immediately to address what he saw as a moral wrong, Major General Kenneth Dahl said at the proceeding.

"I do not believe that there is a jail sentence at the end of this process," Dahl said, adding that sending Bergdahl to prison would be inappropriate.

"He had unrealistic idealistic expectations of other people," said Dahl, who led a team of 22 people on a nearly two-month investigation of the incident and had interviewed Bergdahl for a day and a half.

Bergdahl, 29, was held by Taliban in Afghanistan for five years before being swapped in 2014 for five of the group's leaders. He was charged in March. If convicted of misbehavior, the most serious charge, he could be sentenced to life in prison.

Bergdahl left his post at night and planned to run 19 miles (31 km) to a command post, believing that reports of him missing would help him win an audience with the general officer when he arrived, Dahl said.

"He wanted to create that event," Dahl said.

Instead, Bergdahl was captured by the Taliban 10 to 12 hours after he left.

Bergdahl did not sympathize with the Taliban and was motivated to act over what he perceived to be problems of leadership so severe that he felt his unit was in danger, Dahl said, adding Bergdahl's views of those around him could be naive and uninformed.

A massive search was launched for Bergdahl that lasted 45 days. Soldiers were pushed to the limits on the mission that covered vast and difficult terrain.

"My conclusion is that there were no soldiers killed who were deliberately looking for Sergeant Bergdahl," Dahl said.

Bergdahl disappeared on June 30, 2009, from Combat Outpost Mest-Lalak in Afghanistan's Paktika Province. He left his weapon and other materiel on his cot when he went missing, witnesses said on Thursday, the first day of the hearing.

Prosecutors told the hearing that Bergdahl snuck off in the middle of the night and had launched a plan that was weeks in the making. They said there was sufficient evidence to hold him for trial.

Bergdahl has been stationed at the San Antonio post since returning to the United States.

Bergdahl, dressed in his Army service uniform with his hair in a crew cut, will not speak at the hearing, said his lawyer, Eugene Fidell.

The Article 32 proceeding is similar to a grand jury investigation under civilian law and both sides can call witnesses and lay out legal arguments.

The presiding officer at the hearing, Lieutenant Colonel Mark Visger, will recommend the course of action for resolving Bergdahl's case, whether it should proceed to a court-martial or be dispensed in some other manner.

Bergdahl was freed in a prisoner swap that sent five Taliban leaders who were being held at the U.S. military prison in Guantanamo Bay, Cuba, to Qatar, where they had to remain for a year.

An initial wave of euphoria over Bergdahl's release was followed by a backlash among U.S. lawmakers angry because they were not given 30 days' notice before the transfer of the Guantanamo prisoners, as required by law.