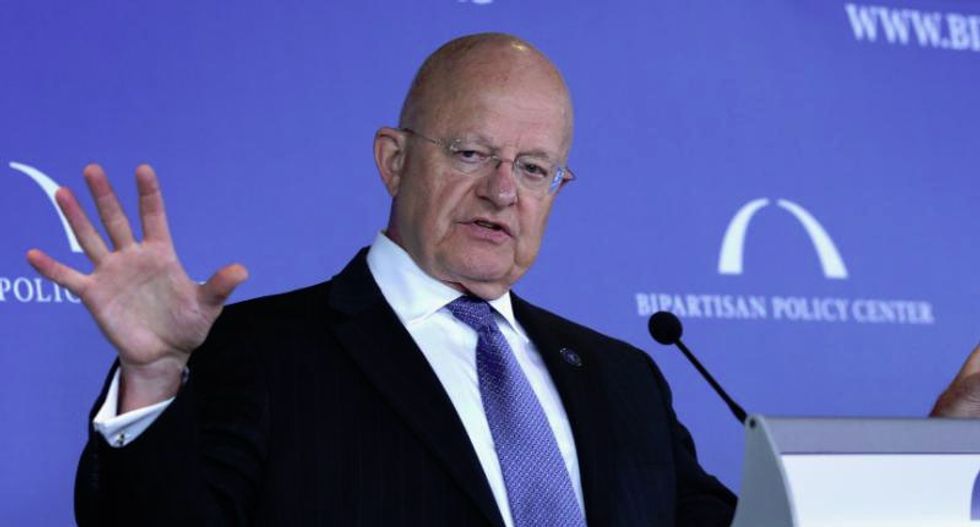 Formere Director of U.S. National Intelligence James Clapper speaks during a discussion on "The 9/11 Commission Report: Ten Years Later," on July 22, 2014 at the Newseum in Washington, DC (AFP Photo/Alex Wong)

Barack Obama’s intelligence chief is said to be in frequent and unusual contact with a military intelligence officer at the center of a growing scandal over rosy portrayals of the war against the Islamic State, the Guardian has learned.

James Clapper, the director of national intelligence, is said to talk nearly every day with the head of US Central Command’s intelligence wing, Army Brigadier General Steven Grove – “which is highly, highly unusual”, according to a former intelligence official.

Grove is said to be implicated in a Pentagon inquiry into manipulated war intelligence.

In communications, Clapper, who is far more senior than Grove, is said to tell Grove how the war looks from his vantage point, and question Grove about Central Command’s assessments. Such a situation could place inherent pressure on a subordinate, sources said.

Knowledgeable former officials are doubtful that Clapper directly intends to manipulate intelligence. And they do not say that the director of national intelligence – who apologized to his Senate overseers in 2013 for publicly misleading Congress on the scope of domestic surveillance – ordered Grove or anyone else to change the command’s assessment of the war.

But one former intelligence official said Clapper “has to be careful of the Cheney effect, going over to the CIA and how does that affect people” – a reference to pressure felt by CIA analysts before the 2003 Iraq invasion to portray Saddam Hussein as posing a more dire threat than he actually did, following then Vice President Dick Cheney’s direct interaction with far more junior analysts and officials.

Clapper’s calls, knowledgeable sources speaking on condition of anonymity said, placed Grove in a difficult bureaucratic position: between the nominal leader of the entire US intelligence apparatus and his lower-level analysts, several of whom consider the year-long war against Isis to be in dire straits.

Grove and his civilian deputy, Greg Ryckman, are said to be the sources of dissatisfaction among analysts within Central Command, where an internal controversy about integrity in intelligence has now sparked an official inquiry by the Pentagon inspector general.

More than 50 intelligence analysts, both those within Central Command and their seconded Defense Intelligence Agency (DIA) colleagues, have registered complaints about manipulated or skewed data, the Daily Beast reported on Wednesday. Analysts object to internal portrayals, said to come ultimately from Grove and Ryckman, of a war proceeding better than Isis’s persistent hold over large swaths of Iraq and Syria suggests. The existence of the Pentagon inquiry was first reported last month by the New York Times.

Some of those skewed and upbeat assessments have reportedly been delivered to Barack Obama. The White House has frequently defended its “Iraq first” strategy; one source interviewed by the Guardian said Obama aides were not receptive to hearing “the narrative that Isis is winning”.

A senior intelligence official who requested anonymity said that Clapper only spoke with Grove by videoconference in the presence of representatives of the Pentagon’s joint staff responsible for intelligence. The official said that Central Command played no role in the briefing process for the president, though its input was routed through the Defense Intelligence Agency.

“All updates provided by the Command are strictly limited to tactical developments such as what happened on the ground overnight regarding issues affecting US personnel and allied forces. They are not broad or strategic assessments,” the official said.

“The intelligence community has a well-earned reputation for analytic objectivity and our assessments are not always in full agreement with Centcom and other commands around the world. These competing views are valuable to senior policymakers and are indeed expected.”

Ryckman is said to have been responsible for revising assessments of the war’s progress he considers pessimistic. Sources said the analysts are not shown data to contradict their understanding of the war, resulting in the frustration that led some to seek the Pentagon inquiry.

“The command environment within Central Command is toxic,” said one former US intelligence official.

The role of General Lloyd Austin, the Central Command chief, in the alleged intelligence manipulation is unclear. But the former defense official said, “at the end of the day, he’s responsible for his staff.”

Austin has made questionable public assertions about the war. In March, he told a congressional panel that Shia militia groups supported by Iran had left the battlefield of Tikrit , even as those Shia militiamen escorted a Guardian reporter into the city .

To the consternation of Senate hawks, Austin has thus far declined to permit US troops in Iraq to spot for airstrikes, a factor inhibiting their accuracy. Last year, Austin defended the wisdom of the US focusing on “ Iraq first ” in the anti-Isis fight and portrayed a looming battle to reclaim Iraq’s second city, Mosul, as potentially decisive. A map distributed by the Pentagon in April purported to show Isis losing ground in Iraq .

Since then, Isis has overrun Iraqi forces in Ramadi, increasing its hold over the country’s Sunni heartland, and moved into Palmyra in Syria, destroyed the 2,000-year-old Temple of Bel. A flood of refugees from Syria fleeing both Isis and dictator Bashar Assad has thrown Europe into crisis .

Colonel Patrick Ryder, a spokesman for US Central Command, confirmed that Grove and Ryckman remained in their jobs.

Without providing information on an ongoing inquiry, Ryder said that Central Command welcomed the inspector-general investigation and defended the integrity of the command’s war analysis. “The multi-source nature of the assessment process purposely guards against any single report or opinion unduly influencing leaders and decision-makers,” Ryder said.

Congress created the job of the director of national intelligence, held by Clapper since 2010, in part to bolster and protect the integrity of US intelligence after the failures to prevent the 9/11 attacks and the misassessment of Saddam Hussein’s nonexistent stockpiles of weapons of mass destruction.

Clapper’s reputation suffered a blow after a March 2013 Senate hearing in which he testified that the NSA was “not wittingly” collecting records on millions of Americans, a claim he had to apologize for making after whistleblower Edward Snowden disproved it. Republican senator and presidential candidate Rand Paul called for Clapper and Snowden to share a jail cell .

Marine General Vincent Stewart, the director of the defense intelligence agency, said on Thursday that the inspector general’s investigation “will play itself out” to determine if his agency “ did anything wrong ”.