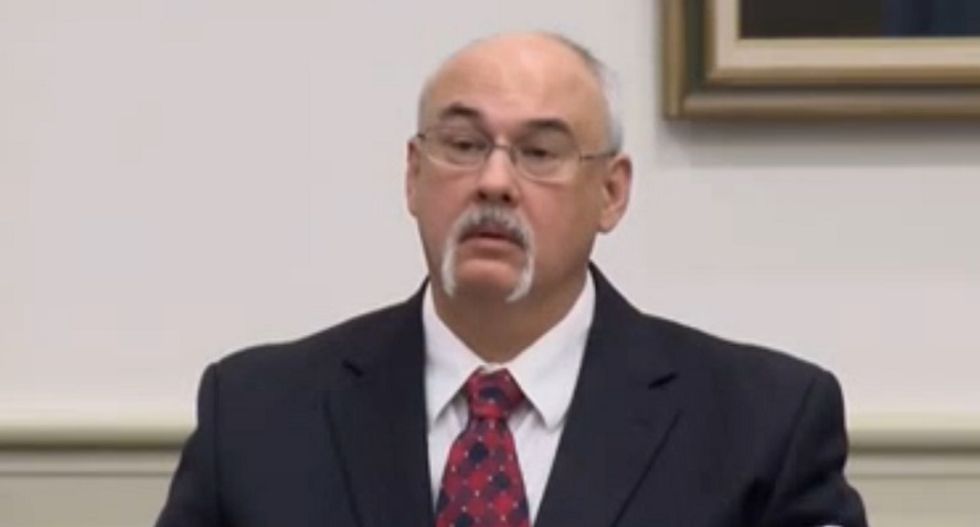 A Virginia man was convicted Tuesday night of hanging a dummy from a noose on the same day of the Charleston church massacre so his black neighbors could see it, WJLA reports.

Jack Turner, 51, of Rocky Mount, initially told investigators the dummy was a scarecrow but later admitted he was racist and it was meant to scare his neighbors, John and Kena Mitchell.

"If he can hang a noose, I don't know what's going to happen. I fear for my family's safety," John Mitchell told the court.

The Mitchells testified in Turner's trial that he had been cordial when they first moved in but became hostile over time, calling the police on them and making obscene gestures.

But things reached a crescendo on June 17, the day that white supremacist Dylann Roof is accused of gunning down nine black churchgoers in Charleston, South Carolina in a racist attack. WJLA reports Turner put a black ski mask on a dummy and hung it from a tree.

Nooses and tree hanging are threats that hold a significant racist message because lynching was a common form of terror used by racists against black people in the South.

State law makes it a felony to display a noose with the intent to intimidate someone, and Turner now faces up to five years in prison and fines of $2,500. The law was enacted in 2009 and prosecutor Robert Deatherage said Turner is the first person convicted under it.

Turner's arrest for the noose and dummy didn't stop him from harassing the Mitchells. After being arrested, he has displayed a Confederate flag on his porch and in a window that faces the Mitchells' home.

WDBJ7 reports that Turner's attorney plans to appeal the conviction because Turner had the right under the First Amendment to display the dummy.

"While we may not always agree with certain types of speech, through actions or words, we all have the right to voice our opinions and beliefs under the First Amendment of the United States Constitution," attorney C. Holland Perdue III said in a statement provided to the station.

Though Turner has been convicted, his neighbors still fear him.

"I still feel fearful because they let him stay out on bond," said Traze Witcher, who is also African-American. "Once again he is my neighbor on my road. I don't know what his next move or what his next thought may be."

Watch the report from WDBJ7 here: