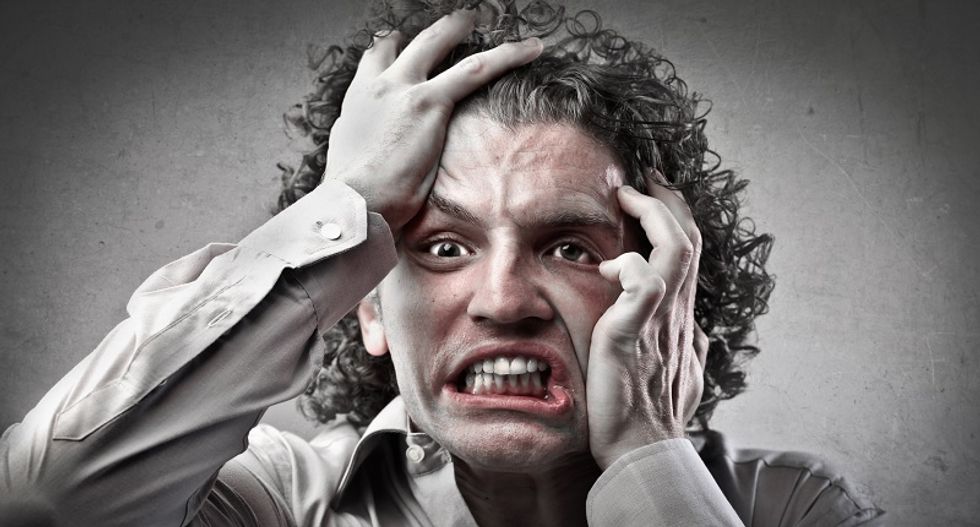 A Washington state man high on meth shot himself in the groin with a revolver after seeing imaginary "Mexicans" in trees outside his home which he believed were going to attack him, the Yakima Herald reports.

Martin Eugene Hoyer, 51, was apparently on day two of a methamphetamine binge when he kicked in his neighbor's door with a handgun in his waistband. Authorities told the Herald when he did so, the gun went off and a bullet lodged in his scrotum. Hoyer was not seriously hurt but faces assault, harassment and unlawful firearm charges as a result of the incident.

Before bursting in on his neighbor, Hoyer pointed his .45 caliber Taurus handgun at another woman through her window. Voices he heard coming through his air vents told him that the neighbor was plotting with “a bunch of Mexicans and white guys” to steal his cash and truck.

After threatening her, Hoyer returned to his apartment but said that's when he saw "Mexicans in the trees" outside his apartment who were plotting to jump him. He also imagined more "Mexicans" were in a second neighbor's apartment trying to get her to open Hoyer's apartment door so they could rob him, the Herald reports.

This is when Hoyer went to her apartment to "save" her. When he went to kick in her door, he caused his gun to go off. The bullet ricocheted off his hip bone and went into his lower abdomen, coming to rest in his scrotum, authorities told the paper. Police found him walking with the injury from his apartment to his truck.

Hoyer didn't suffer any permanent damage from the injury, but had a second bullet lodged in his body from an earlier gunshot wound.

He has four previous felony convictions. Police told the Herald he had smoked about $100-worth of meth in two days. They found three other firearms in his home along with ammunition and small amounts of methamphetamine. He is being held on $50,000 bail and is scheduled for arraignment Monday.