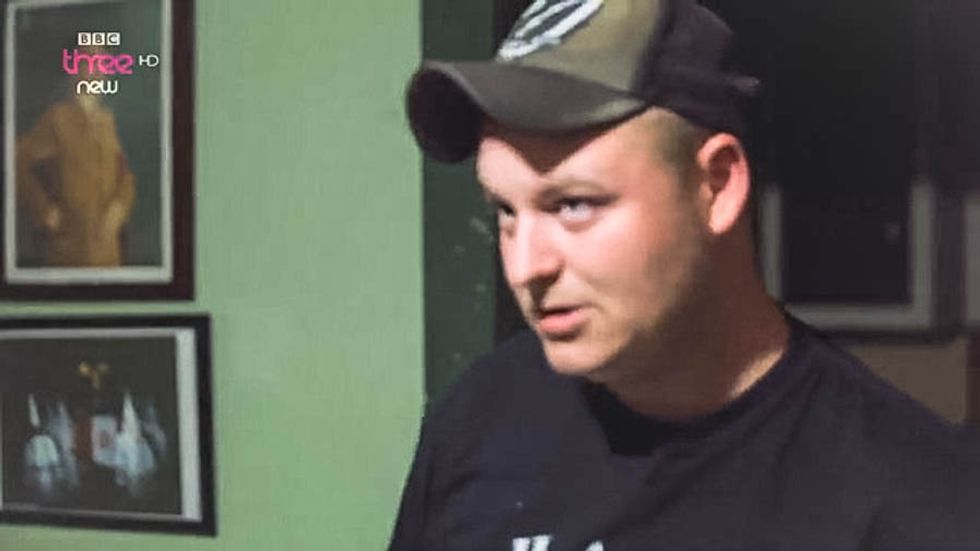 A BBC documentary crew who filmed members of the Ku Klux Klan in Alabama were shocked after a member of the racist organization claimed that the Holocaust concentration camps were actually "summer camps" for Jewish people.

Following the murders of nine people by a white supremacist at Emanuel African Methodist Episcopal Church in Charleston, BBC negotiated with a KKK chapter in Alabama to get a closer look at racist hate groups in the U.S.

BBC Three's documentary "KKK: The Fight for White Supremacy," which aired on Monday, follows members of the Klan as they prepare for what they say will be a race war.

As Klan members assemble 3,000 flyers to deliver to a predominantly black neighborhood, the BBC interviewer notices a photograph of Adolf Hitler on the wall.

"Adolf Hitler, he was one of the smartest men there ever was," a Klan member explains. "The so-called concentration camps like Auschwitz and so forth, they say they were death camps. But these death camps, they gave the so-called people that were being killed cigarettes, there was coffee, there was a movie theater, a library, even a swimming pool in Auschwitz."

"And if you're going to sit there and kill all these people then how come all these things would be in there?" he continues. "It's more like a summer camp."

"Sorry," the stunned interviewer interrupts. "You're telling me Auschwitz was like a summer camp?"

"Well, they had a swimming pool, a movie theater and everything else," the Klan member insists. "You know, you don't see in prisons today any kind of swimming pool being in the middle of the prison hall."

"So what do you think the Jews were doing in Auschwitz?" the interviewer asks.

"Swimming," the white supremacist replies. "And working. Because they didn't want to do any work, and what Hitler was trying to do was he was trying to teach them to work, trying to rehabilitate them, if you will."

"Where did you hear this?" the dumbfounded interviewer wonders.

"It's all history," the Klan member says.

Although the BBC interviewer continues to press, Klan members eventually tire of the subject and head out to distribute their fliers.

"In Britain, inciting racial hatred carries a possible sentence of seven years in prison," the narrator explains to the British audience. "Here in the U.S., the First Amendment guarantees free speech. Even for blatant racism."

"More than a million prisoners died at Auschwitz," the narrator adds. "The vast majority of them were Jewish."

Watch a trailer for the documentary below.