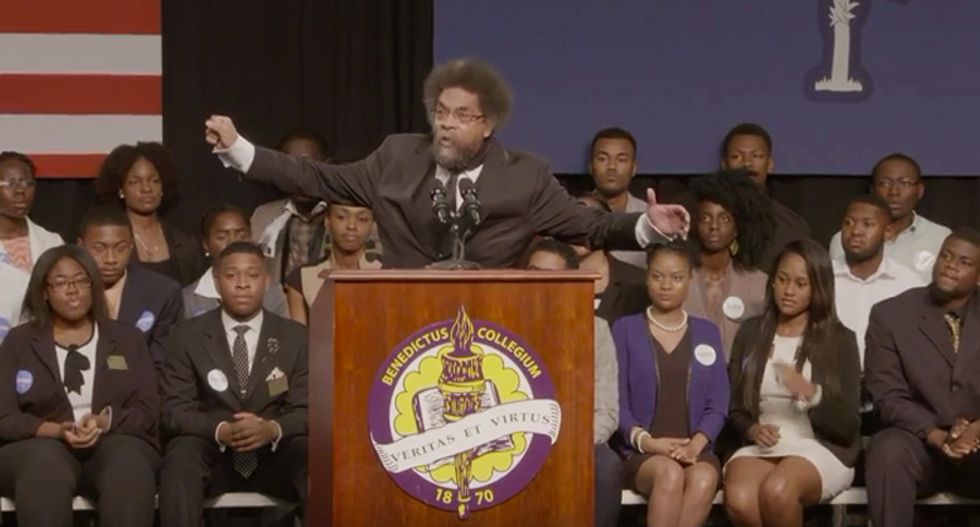 Activist and academic Cornel West, who recently endorsed the upstart candidacy of Sen. Bernie Sanders (VT-I),  put his boots on the ground for the progressive candidate by appearing with him at historically black Benedict College in South Carolina.

While Sanders has had his difficulties with Black Lives Matter activists, he has the full-throated support of West who calls him "Brother Bernie."

“What I love about Brother Bernie is he’s a brother of integrity and honesty and decency,” said West, stating “He’s not just on the move. He’s going to win!”

Referring to polls showing Sanders surging, particularly among younger voters, West said, "Oh, if the election could be held right now, and only those who voted had to be 25 and younger, he'd be president at the moment."

After his introduction, West sat with the students and led them in a standing ovation as Sanders mentioned the names of black Americans who have died at the hands of police officers.

Watch video of West's introduction, uploaded to YouTube by Bernie 2016:

New York is to stage a ticker-tape parade to pay homage to essential workers who have distinguished themselves during the coronavirus pandemic, Mayor Bill de Blasio announced on Monday.

In grand New York City tradition, the procession will roll out at the south end of Broadway in Manhattan, also known as the Canyon of Heroes, on July 7.