WATCH: Kim Davis’ lawyer who compared her to Rosa Parks and MLK now compares her to Abraham Lincoln 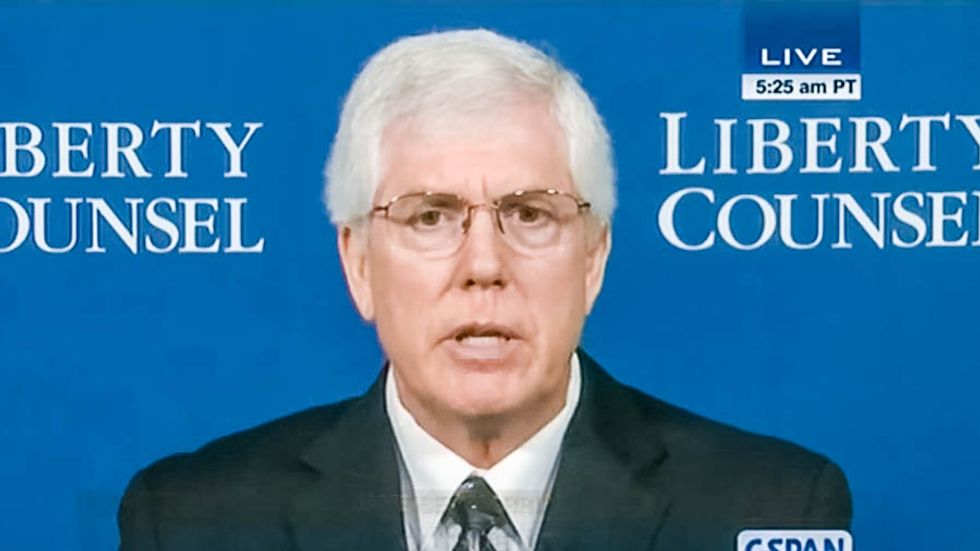 Mat Staver -- a lawyer from theocratic law firm The Liberty Counsel -- said on Sunday that his client, Kentucky County Clerk Kim Davis, is like President Abraham Lincoln because of her stand against marriage equality for all Americans.

Staver made the remarks in an appearance on C-SPAN after which a caller said that Davis should do her job or step down.

"Well, she is doing her job quite well," Staver said. "By the end of this year, she will have saved the taxpayers in Rowan County $1.5 million in her first year as the elected official since 2014, so that's quite substantial, to be able to do that."

"Secondly," he went on, "if we told Abraham Lincoln, 'Abraham Lincoln, you should just go along with the Dred Scott decision. After all, it is what the racist Chief Justice Taney wrote and it's the law of the land.' And yet, Lincoln advocated something different than that and unfortunately because of that Dred Scott decision we had to fight a Civil War. It was a terrible time in our history."

In the U.S. Supreme Court case Dred Scott v. Sanford, the court ruled that blacks could not be U.S. citizens, whether slaves or free. As such, they could not sue U.S. citizens in federal court in order to obtain their freedom.

The case is held by many to be an embarrassing error by the highest court in the land, with some historians calling it "unquestionably, our court's worst decision ever."

Staver and other Davis supporters assert that the Supreme Court's decision legalizing same-sex marriage on a national level in June is similarly misguided.

Dred Scott was overturned by the passage of the Civil Rights Act of 1866 and the ratification of the 14th Amendment of the Constitution, which says that any person born in the U.S. or its territories is automatically an American citizen.

"Talking about someone like Kim Davis," Staver said Sunday, "she is just simply saying she wants to do her job, she does it well. Just give her a reasonable accommodation."

Staver has made previous statements comparing Davis to Martin Luther King Jr., Rosa Parks and Jews living in Nazi Germany during the Holocaust.