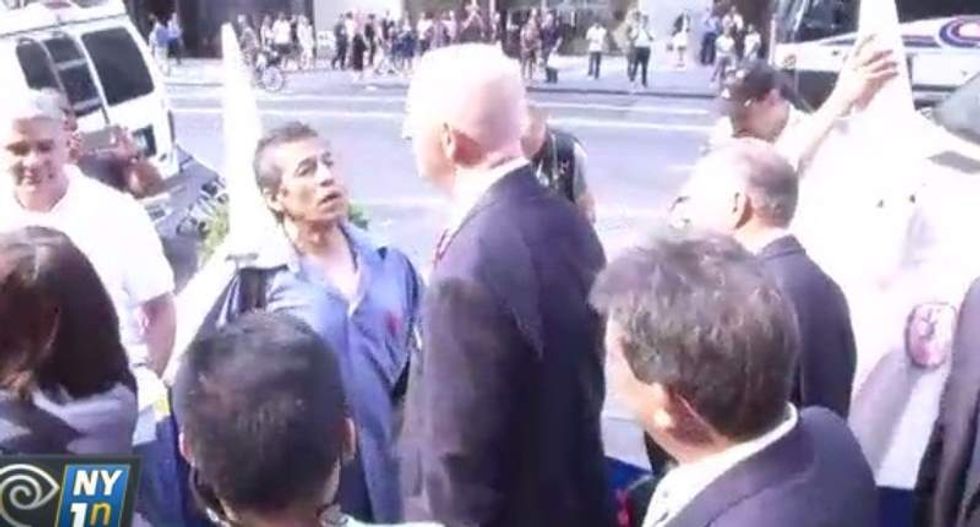 Efrain Galicia confronts a security guard for Donald Trump during a protest on Sept. 3, 2015. [NY1 Noticias]

A security guard for Donald Trump punched a protester on Thursday in the midst of a demonstration criticizing the Republican presidential candidate for his anti-immigrant rhetoric, NY1 Noticias reported.

The station aired footage of the demonstrator, Efrain Galicia, chasing after the guard, who was carrying a sign he took from the protesters. The guard then turns and hits Galicia in the face before walking away. Galicia is seen backing up a few steps before being held back by another guard.

NY1 also reported that Galicia later squared off with the guard who hit him in front of several news crews.

"These men are acting just like their boss, Donald Trump, pushing Jorge Ramos from Univision out," Galicia said of the guards. "This man thinks he can do whatever he wants in this country, and we're going to stop him."

The protest was the third such effort as part of an anti-Trump boycott, and was held after Trump announced that he had signed a pledge not to run as a third-party candidate in the upcoming presidential election.

Update, 9:25 p.m. EST: The New York Times reported that Trump's campaign plans to file charges against Galicia, saying the guard was "jumped from behind."

Watch footage from the confrontation, as posted online by Oliver Willis, below.