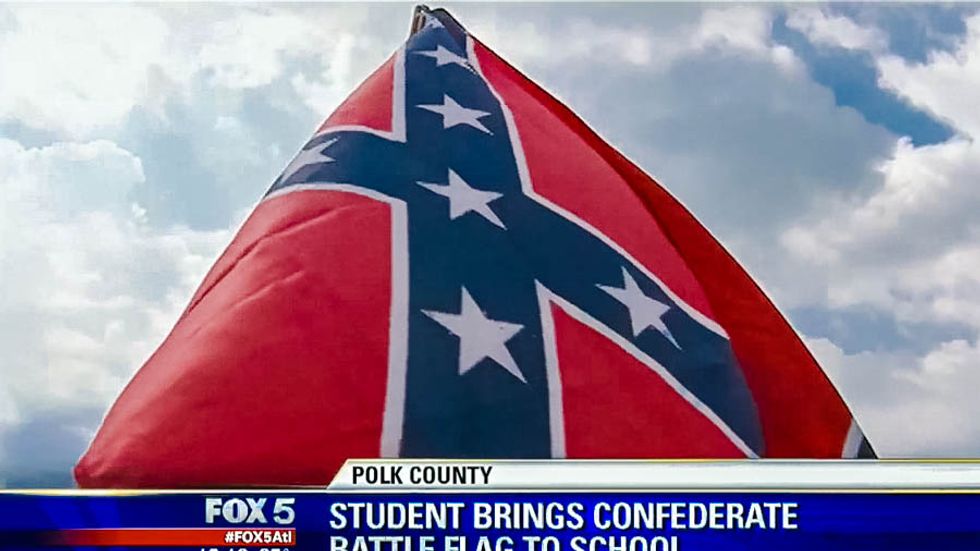 Officials at Rockmart High School in Georgia's Polk County said that they decided to lock down the school last week after white student sparked racial tensions by bringing a Confederate flag into the cafeteria.

Principal Wesley Cupp told WAGA that a disruption occurred after a white 10th grader showed up with a Confederate flag attached to his backpack.

"He got dropped off out of his truck and came down the sidewalk just like any other student does," Cupp recalled.

According to Cupp, the student took the flag into the school cafeteria, where he was confronted by two black students.

"They wanted to confront him about what he had on his back pack. What did they say? Hey man why you doing that," the principal explained.

Cupp said that some shoving occurred, but staff quickly broke up the confrontation.

After rumors surfaced that other students planned to bring Confederate flags into the school, Cupp made the decision to conduct a lockdown drill.

"We just did that as a precautionary situation to help maintain and control what could have been a bad situation," he observed.

Cupp also reminded students that they did not have a free speech right to fly the Confederate flag in school.

All three of the students involved in the confrontation were suspended. Cupp noted that counseling would be offered to the students with the hopes of easing tensions at Rockmart High School.

Watch the video below from WAGA.