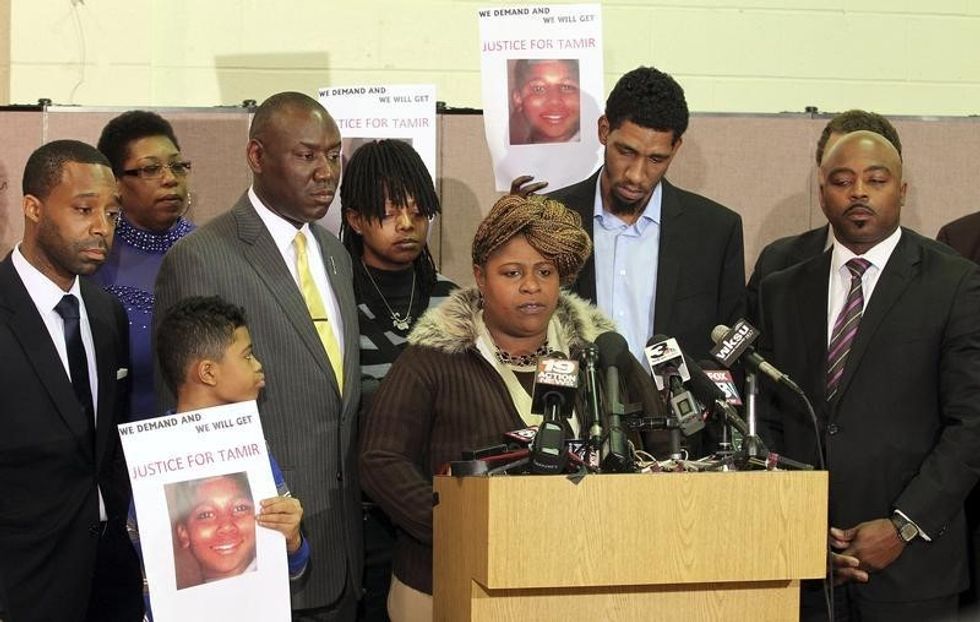 Samaria Rice, the mother of Tamir Rice, the 12-year old boy who was fatally shot by police last month while carrying what turned out to be a replica toy gun, speaks during a news conference at the Olivet Baptist Church in Cleveland, Ohio December 8, 2014. REUTERS/Aaron Josefczyk

An Ohio prosecutor handling the fatal shooting by police of a 12-year-old boy while he played with a replica pistol was criticized by activists on Sunday for releasing two reports that called the shooting "reasonable" before any grand jury decision on charges had been announced.

"It looks as though the prosecutor is trying to taint the grand jury process as well as manipulate the judicial process overall," said Edward Little, one of the so-called Cleveland 8, a group of clergy, academics and activists who have called for the two police officers involved in the November 2014 playground shooting of Tamir Rice to be indicted.

The conclusions of a retired FBI agent and an out-of-state prosecutor were submitted to the Cuyahoga County prosecutor's office ahead of an expected decision by a grand jury on whether criminal charges were warranted in the shooting, which was captured on surveillance video.

Cuyahoga County Prosecutor Timothy McGinty said in a statement on Saturday that his office was not reaching any conclusions based on the two reports. The reports said Timothy Loehmann, the white officer who shot Rice, who was black, opened fire because he felt threatened.

The case is one in a series of high-profile police-related shooting deaths of African-Americans which have raised questions about the use of force by law enforcement.

Little said the release of the reports to media late Saturday on a holiday weekend was "reminiscent" of prosecutors' handling of the shooting of Michael Brown in Ferguson, Missouri where details of the case were leaked to the media before a grand jury decision not to bring charges against the police officer involved.

"This community has lost all hope in this prosecutor to be fair and impartial," Little said.

Retired FBI agent Kimberly Crawford, in a review of the shooting, wrote that it was "apparent not only was Officer Loehmann required to make a split-second decision, but also that his response was a reasonable one.”

In another report, Colorado prosecutor S. Lamar Sims also concluded that "Officer Loehmann's belief that Rice posed a threat of serious physical harm or death was objectively reasonable, as was his response to that perceived threat."

The Rice family's attorney, Subodh Chandra, accused prosecutors of failing to properly advocate for the victim and of "sandbagging" the grand jury proceedings by improperly releasing case documents.

"Our prosecutor is freelancing. The officers here are being given special treatment," he said in a phone interview.

Civil rights activists lit up social media on Sunday to criticize the handling of the case.

"It's Mike Brown all over again. The police are working their tactics to make sure the family don't get that day in court," said Tory Russell, with Hands Up United, a Ferguson-based social rights group.

"This is a very transparent attempt to undermine the ability to receive justice for Tamir Rice and his family," said Arisha Hatch, with the civil rights group Color of Change.

Rice was killed after Cleveland police received an emergency call about someone brandishing a gun outside a city recreation center. Officer Loehmann shot Rice twice in the abdomen, seconds after his partner, who also is white, drove their vehicle to within 5 feet (1.5 meters) of the boy in the playground. The gun turned out to be an replica pistol that shoots pellets, but had the orange tip removed.

(Reporting by Kim Palmer and David Adams in Miami; editing by Grant McCool)