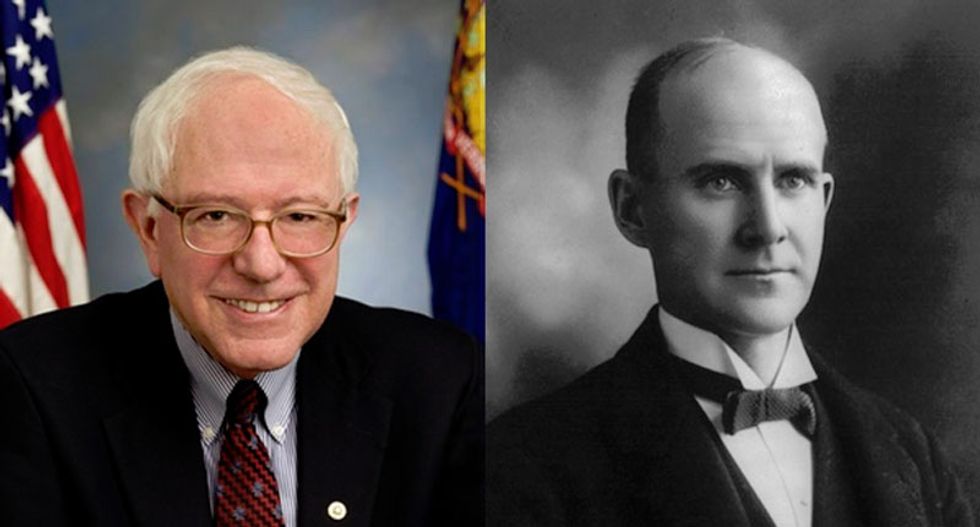 Bernie Sanders has been a big surprise story as the Democratic Party moves towards the Iowa caucuses next winter. Many, including me, have been surprised that a self-proclaimed socialist could take the lead in New Hampshire and Iowa. Indeed, Sanders has described himself as “stunned” by his popularity. To many, it has seemed like Sanders has come out of nowhere to offer a serious challenge to Hillary Clinton’s candidacy. But there are many historical precedents for a campaign like Sanders’s, and though none offers a crystal ball view of what will happen in the campaign, each offers an analogy that helps us to understand the historical traditions and challenges that Sanders’s campaign both builds upon and must confront.

It has been widely reported that Sanders has a plaque in his office honoring Eugene Debs, the great labor radical and socialist. It is not unusual for a politician to look to the past for inspiration. After all, Abraham Lincoln described Henry Clay as the ideal statesman, and Ronald Reagan invoked the Puritans with his language about America as “a shining city on a hill.” Barack Obama admires Lincoln. Still, this is different: Debs was an unrepentant leftist, and inflammatory figure in his own day. Does Debs serve as an apt analogy for Sanders?

Last June, my teenage son and I heard Sanders give a stump speech in Waterloo, Iowa. I have observed presidential caucuses and campaigns in Iowa for twenty years, but I had never seen a candidate drawing such a full house a full six months before the caucuses. Sanders’s speech included fiery rhetoric, attacks on billionaires and a rebuke of the Supreme Court’s Citizens United decision, which has opened the door to more shadowy, secretive Political Action Committees (PACs) funded by the rich. He sounded like the Occupy Wall Street movement, which camped in cities to draw attention to radical increases in inequality, which have returned to levels not seen since the Gilded Age. The event left me with the impression that Sanders was a viable candidate, although I had no idea how quickly his campaign would take off and move into the lead in our state.

Sanders cites Eugene Debs as a political hero, but times have changed over the last century. The Vermont senator is no Debs, nor could he be. Debs led a landmark Pullman strike in 1894, briefly paralyzing the entire railroad industry, and landing himself in jail. During World War I, he was thrown into prison again, this time for speaking in defense of an anarchist trade union, the Industrial Workers of the World, or IWW. He received a million votes for the presidency in 1920 while still locked in a cell.

Today, the most relevant difference between the two men is that Debs refused to join the Democratic Party, which he saw as capitalist. Instead, he ran for the presidency five times as a member of the Socialist Party. He is supposed to have declared, “I would rather vote for something I want and not get it, than to vote for something I don’t want and get it.” An eclectic thinker, he identified with the Marxist tradition, but he also voiced an indigenous American radicalism from Thomas Paine, and the radicals of the Gilded Age such as the Knights of Labor. Debs presidential runs aimed to overthrow the system, not to work within it.

Sanders talks like an old-school American trade union leader, addressing crowd as “brothers” and “sisters.” This is remarkable in today’s environment, in which only about six percent of private sector employees are unionized. He played an active role in the Civil Rights movement and Vietnam War protests, credentials that help him with the Democratic Party’s activist base. He has been representing Vermont in Congress since 1991, but his straight-forward style and remarkable policy views ensure that no one will view him as just another career politician. More importantly, at the beginning of his stump speech last June, he noted that while Election Day is important, what happens the day after is crucial. He understands that he cannot succeed as a president without an ongoing movement by millions of people working for radical change.

In some respects, Sanders’s campaign seems reminiscent of the Populist movement of the 1890s. Radicalized farmers facing extreme poverty driven by falling commodities prices, built a remarkably democratic “movement culture.” The Populists created farm cooperatives and demanded economic justice. They understood that the gold standard of that time benefited banks and other creditors. Instead, they wished for paper dollars, or “greenbacks,” which would bring modest inflation and some relief to the impoverished. In 1896, the Populists folded themselves into the Democratic Party campaign of William Jennings Bryan, who declared that America would not be crucified upon “a cross of gold.” Unfortunately, Bryan’s attempts to find a middle ground between the “gold bugs” and the radical advocates of “greenbacks” failed. To make a long story short, the Populist-Democratic fusion of 1896 lost an election and Populism faded away, but not without leaving its mark on the American political tradition.

While Sanders’s campaign speaks to related concerns about inequality, he also runs the risk that the economic focus of his message might overwhelm other issues of concern. The speech I heard last summer did not say enough about women or African-Americans. Sanders focused on social and political inequality, while subsuming struggles over race and gender into the goal of class liberation. Since then, he has come under fire, particularly by activists in the Black Lives Matter movement for failing to mobilize against police violence. Sanders has responded by altering his stump speech and noting his past Civil Rights activism, combined with his excellent Senate voting record on issues related to race and gender.

Ironically, Debs, like Sanders, has been criticized from the left by opponents who viewed him as insensitive to racism. Critics of the American socialist leader often point to a 1903 speech by Debs, “The Negro in the Class Struggle,” in which he said that the Socialist Party had “nothing special to offer the Negro.” Recently the historian William P. Jones has defended Debs, noting that the speech began with the Socialist leader condemning those socialists who “either directly share in the race hostility against the Negro, or avoid the issue, or apologize for the social obliteration of the color line in the class struggle.” In the 1990s, when labor historians began to focus on “whiteness” in working-class life, Debs’s views on race have again come under scrutiny. I will not enter that thorny debate here, but it is worth noting that the Socialist Party of Debs’s day included many, especially reform-minded socialists in Milwaukee, who despised African-Americans. Compared to such socialists as those, Debs’ record of commitment to black equality is extraordinary.

While commentators have written about Donald Trump as if he was an unprecedented phenomenon in American politics, it is interesting that many writers have drawn on historical analogy to explain the rise of Bernie Sanders. David Greenberg, writing in Politico, has suggested the value of the campaign even if Sanders loses the nomination. He suggests that Sanders, like Debs, could bring about genuine reform by challenging the Democrats from the left. He argues that Sanders could “win by losing.” In particular, the historian notes banking reform and child-labor laws achieved during the Progressive era, which were initially part of Debs’s agenda. Further to the left, Jacobin’s Bhaskar Sunkare sees some modest value in Sanders’s run. He notes that the Sanders campaign cannot transform the system, but it could provide an opportunity for “socialists to regrow, organize together.” Further, he hopes it will give legitimacy to the world “socialist” and “spark a conversation about it.” From this perspective, Sanders has already won.

Some see the Sanders campaign not only as futile, but even harmful. Writing for Jacobin and Socialist Worker.org, Elizabeth Schulte and Alan Maas particularly object to Sanders’s promise of support for the Democratic Party’s nominee, presumably Hillary Clinton, if he loses the nomination. They offer a historical analogy of their own, comparing Sanders to previous progressive candidates such as Jesse Jackson and Dennis Kucinich. They believe that Jackson and Kucinich offered little real change, and instead channeled young activists into the corrupt Democratic Party. Sanders’s socialist ideals, or longtime status as an independent, seem less important than his current relationship with the Democrats. Their view, stated simply, is that Bernie Sanders is no Eugene Debs. That argument is true, but it is not very helpful today, since Debs will not be on the ballot. It puts the writers in an odd position, opposing the first major social-democratic candidate in a century. (Disclosure: Like Schulte and Maas, I belonged to the International Socialist Organization in the 1980s, and generally view them as perceptive thinkers.)

Predictably, some on the right have already leveled toxic charges against the Sanders campaign. Most notably, Kevin D. Williamson of the National Review unleashed a scurrilous attack on Sanders last summer. After talking to a couple of rank-and-file Sanders supporters who favored protectionist trade policies for the auto industry, Williamson concluded: “In the Bernieverse, there is a whole lot of nationalism mixed up in the socialism. He is, in fact, leading a national-socialist movement, which is a queasy and uncomfortable thing to write about a man who is the son of Jewish immigrants from Poland and whose family was murdered in the Holocaust. But there is no other way to characterize his views and politics.”

In fact, Williamson’s attack is not just “uncomfortable” but contemptible. The writer links Sanders to the “political language of the 1970s and 1980s [which] spoke of a capitalist conspiracy or a conspiracy of bankers (a conspiracy of Jewish bankers, in its ugliest versions), a notion to which Sanders pays ongoing tribute….” Here is one of the most pernicious misuses of history that I have ever seen. I won’t accuse the National Review of anti-Semitism, but I will note that many fascists used the terms “Jew” and “socialist” interchangeably, and that we will see more attacks on Sanders as a pinko if his campaign continues to thrive.

History can often help us to understand the present, but historical comparisons also can be misleading. All of the writers I have discussed assume that Sanders will fail to win the presidency. Although the candidate is a long-shot, his quest for the presidency is not impossible. Stranger things have happened in history. So what is the historical significance of a rousing Sanders rally like the one that I attended in Iowa last June? I don’t know. You would have to ask the teenager whom I brought to the rally. He is the one who signed up to volunteer for the campaign.

Wallace Hettle is a Professor of History at the University of Northern Iowa.