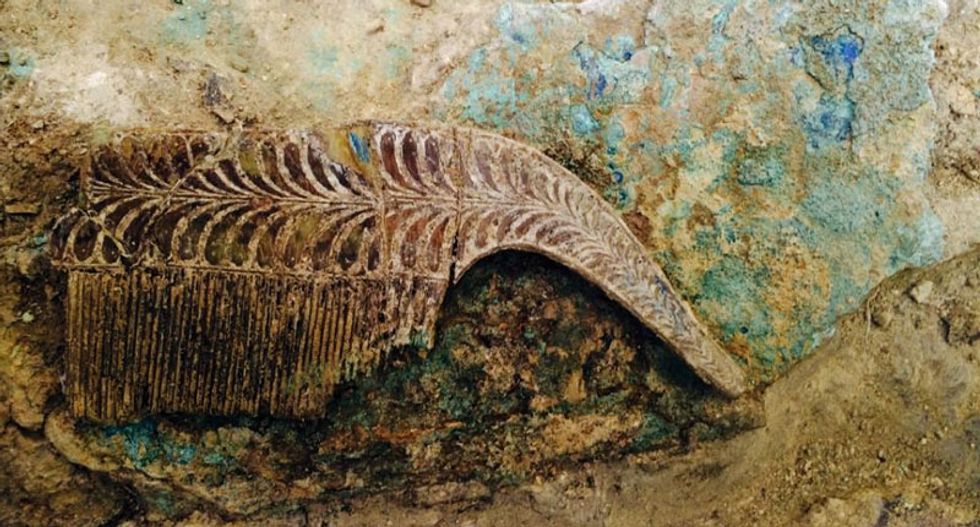 An undated picture released on October 26, 2015 by the Greek Culture Ministry shows an ivory comb, one of the items found in a 3,500 years old warrior tomb unearthed in the Peloponeese region of Greece (AFP Photo/)

US archaeologists in Greece have uncovered the skeleton of an ancient warrior that has lain undisturbed for more than 3,500 years along with a huge hoard of treasure, the Greek culture ministry announced Monday.

The treasure is "the most important to have been discovered in 65 years" in continental Greece, the ministry said.

The wooden coffin of the unknown soldier -- evidently a person of some importance -- was found on the site of the Mycenaean-era Palace of Nestor on Greece's Peloponnese peninsula.

He had been laid to rest with an array of fine gold jewelry, including an ornate string of pearls, signet rings, a bronze sword with a gold and ivory handle, silver vases and ivory combs.

The jewellery is decorated in the style of the Minoans, the civilisation that flourished on the island of Crete from around 2000 BC, with the figures of deities, animals and floral motifs.

The archaeologists, Jack L. Davis and Sharon R. Stocker from the University of Cincinnati, have identified more than 1,400 pieces "whose quality testifies to the influence of the Minoans" on the later Mycenaeans.

The Mycenean civilisation spread from the Peloponnese across the whole of the eastern Mediterranean in the 2nd century BC.

The tomb, which stands at 2.4 metres (7 feet 10 inches) long and 1.5 metres wide, was unearthed during excavations begun in May near Pylos, on the site of the palace of Nestor.