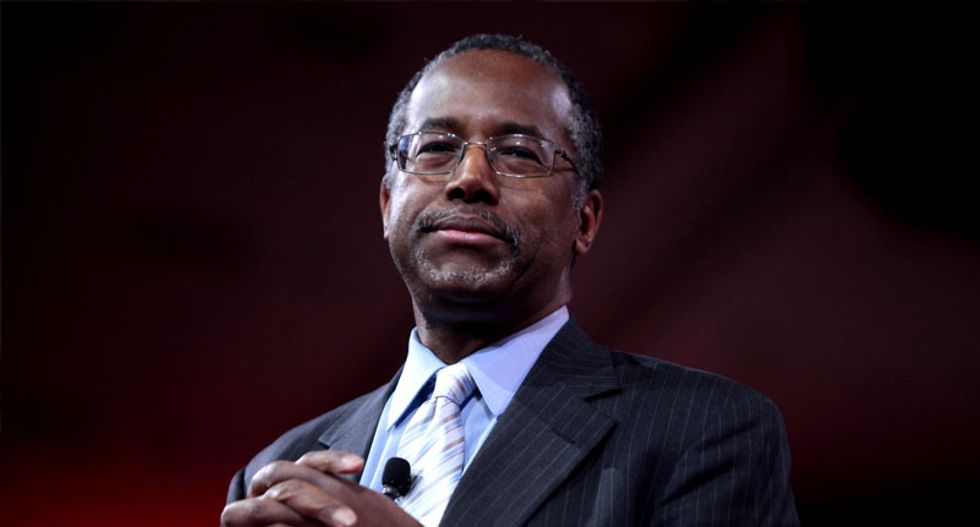 Ben Carson has answered critics who say he lacks energy for the Republican presidential fight, saying that in contrast to his softly spoken demeanour as an adult he was “very volatile” as a teenager, when he “would go after people with rocks, and bricks, and baseball bats, and hammers”.

Related: The problem with blowback against Ben Carson? 'People take him too literally'

Appearing on NBC’s Meet the Press in an interview to be broadcast on Sunday, Carson was asked about a comment from Donald Trump, the GOP frontrunner who this week fell behind Carson in polling in Iowa.

Speaking on Friday, the Trump said : “We have a breaking story. Donald Trump has fallen to second place behind Ben Carson. We informed Ben, but he was sleeping.”

He repeated the charge on CNN on Sunday, saying Carson was “lower energy” than the former Florida governor Jeb Bush, whose sluggish campaign led him this week to make financial cuts .

Carson said he would not respond in kind, because he did not want to “get into the mud pit”.

Carson is a retired neurosurgeon, known for being the principal surgeon in the first separation of twins conjoined at the head in which both twins survived. Referring to that medical career, as he has often done when asked about his lack of experience in elections or public office, he said: “I will tell you, in terms of energy, I’m not sure that there’s anybody else running who’s spent 18 or 20 hours intently operating on somebody.”

An Associated Press-GFK poll released on Sunday had 77% of registered Republican voters saying they would prefer an “outsider” candidate to a professional politician, and 65% holding a favourable impression of Carson. Most, however, thought Trump was most electable.

On NBC, Carson continued: “I am soft-spoken. I do have a tendency to be relaxed. I wasn’t always like that. There was a time when I was, you know, very volatile. But, you know, I changed.

“As a teenager, I would go after people with rocks, and bricks, and baseball bats, and hammers. And, of course, many people know the story when I was 14 and I tried to stab someone. And, you know, fortunately … my life has been changed. And I’m a very different person now.”

Carson, the author of a number of bestselling books, has often told the story of his wayward youth and the time he attempted to stab a friend . The person he threatened with a hammer was his mother .

His new book, A More Perfect Union , deals with the US constitution. On the campaign trail, Carson has caused controversy with statements on same-sex marriage (ruled legal by the supreme court this year); why no Muslim should be president (the constitution rules out religious tests for office holders ); and whether the Holocaust would have happened if Jewish people in Europe in the 1930s and 1940s had been armed (he says maybe not).

Asked by NBC host Chuck Todd if such statements would hamstring his aspirations to the presidency, Carson said: “As people get to know me, they know that I’m not a hateful, pathological person like some people try to make me out to be. And that will be self-evident.”

Asked why he chose so often to refer to the Nazis – in a 2014 discussion of his treatment by the Internal Revenue Service he said the US was living “ in a Gestapo age ” – Carson offered an echo of Trump’s insistence that he will win the Hispanic vote despite his strong anti-immigrant rhetoric.

Carson said he had “heard from many people in the Jewish community, including rabbis, who said, ‘You’re spot on. You are exactly right.’”

Addressing Todd, he added: “Some of the people in your business, quite frankly … like to try to stir things up and try to make this into a big, horrible thing.

“If I say something about something that we don’t want to become and we never even want to get close to it, then [to critics] I’m comparing it and I’m saying we’re there. That’s what they do.

“And, of course, for people who aren’t really thinking deeply, you know, that resonates. But, you know, the fortunate thing is a lot of people really do think for themselves, as you can see, you know, from the poll numbers here.”

Carson also answered questions about healthcare, foreign policy and gun rights, saying on the last issue the American people should have the right to the same weapons available to the government, though he did draw the line at “surface-to-air missiles”.

Asked about abortion, another siren call to voters who dominate the Republican primary, Carson said he would appoint supreme court judges to overturn Roe v Wade , the 1973 decision that enshrines the right.

He also said he did not support exceptions for cases of rape or incest, but if in cases of a mother’s life being in danger “people can come up with a reasonable explanation of why they would like to kill a baby, I’ll listen”.

He also used more controversial – and familiar – language. Asked if a mother’s rights took primacy over those of a foetus, Carson said they did not.

He continued: “During slavery – and I know that’s one of those words you’re not supposed to say, but I’m saying it. During slavery, a lot of the slave owners thought that they had the right to do whatever they wanted to that slave.”

Carson first came to national prominence when, in a speech to the 2013 National Prayer Breakfast attended by Barack Obama, he said Obama’s signature healthcare reform, the Affordable Care Act, was the “worst thing to have happened in this nation since slavery” .