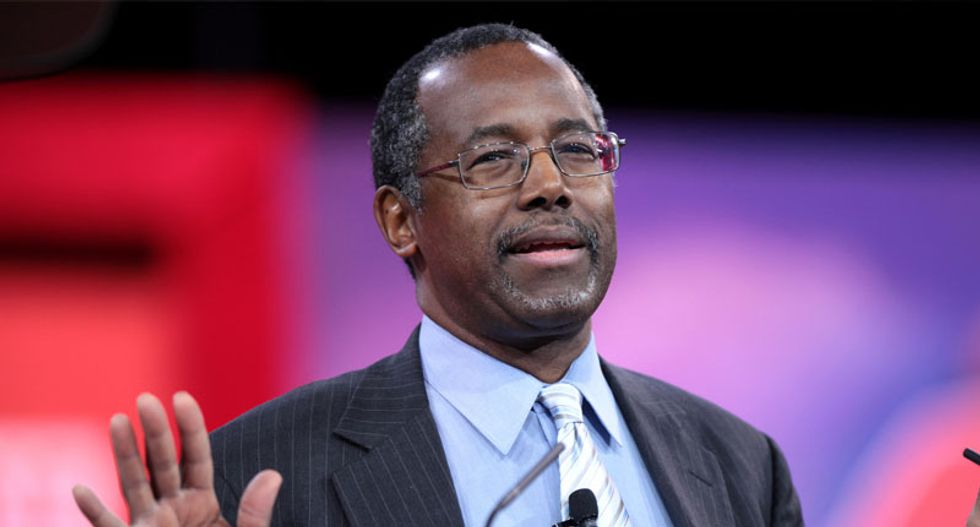 CNBC is hosting tonight's Republican presidential debate, and the business news network is likely to press candidates on their views on fiscal and economic policy. This presents a great opportunity to raise questions about the proposals offered by the new GOP frontrunner, Ben Carson, who is leading polls among Iowa Republicans and tops the most recent New York Times/CBS News survey of Republican voters nationwide. While Carson's string of bigoted and head-scratching statements have received the most attention from the media, his fiscal plan deserve scrutiny, as it relies on pure fantasy. His policies include:

Essentially, Carson plans to dramatically reduce revenues with huge tax cuts for high earners (while raising taxes on the 47 percent of people who — while responsible for paying other forms of taxes — do not owe federal income taxes), approve some spending cuts while reversing the current dip in defense spending, and then magically balance the budget by the end of his first term all the while running the risk of creating a global financial crisis due to his refusal to raise the debt limit.

As Tim Worstall of the conservative Adam Smith Institute wrote in Forbes, Carson's plan flies in the face of "the simplest of logic and mental arithmetic."

The watchdog group Citizens for Tax Justice ran the numbers on Carson's Bible-based 10 percent flat tax, and the results were striking. The group found that his proposal "would yield tax revenues of only $1.1 trillion." Compare that to the country's current budget outlook, where the government expects to take in approximately $3.5 trillion in tax revenue and spend around $4 trillion. Carson's proposal would cover just over a quarter of current spending levels.

However, Carson has not revealed where he would find trillions of dollars in cuts to balance the budget, which he would require himself to do through the Balanced Budget Amendment. Instead, Carson would balloon the deficit, which this year sunk to $435 billion, by $3 trillion.

Carson insists on the stump that a freeze on federal spending will balance the budget in just four years: "We don't raise it one penny for three or four years and the budget will be balanced, just like that."

But he offers no realistic plan to make up for the massive revenue shortfall resulting from his biblical tax policy.

Carson said that he would impose a government hiring freeze and order cuts for departmental budgets of between 3 to 4 percent. Slate's Jordan Weissmann points out that even if "you were to cut all federal outlays, including Medicare, Medicaid, military spending, and social security, by 4 percent, you would save less than $150 billion." Weissmann also noted that a strict government hiring freeze "would only save about $50 billion over a decade."

Weissmann's admittedly generous estimates are even more generous when you consider the fact that Carson has said he would not cut defense spending, the largest outlay of U.S. discretionary spending, and that his Medicare and Medicaid replacement plan would likely cost more than the current health system.

Even using Weissmann's figure, which is already too kind, Carson doesn't come anywhere close to making up for the trillions of dollars in lost revenue that would result from his flat tax.

The presidential candidate also doesn't seem to understand how the debt ceiling works.

The debt ceiling allows the government to borrow money in order to “fund obligations already legislated by Congress.” Without doing so, the U.S. is at risk of default.

In an interview with Marketplace, though, Carson said he would oppose raising the debt ceiling and pledged that if elected president he "would not sign an increased budget." Of course, increased budget spending is not the same as raising the debt ceiling, which covers money Congress has already allocated. He also told Marketplace's Kai Ryssdal that he would prevent a default on the debt by telling the government to "get on the stick." Carson similarly told The Hill that "there will not be any budget signed that increases our debt ceiling" when he's president.

Economists across the board agree that a failure to raise the debt ceiling would have catastrophic effects on not just America's economy but also the global financial system.

While Carson is quite sure that his policies will balance the budget "just like that" and foreclose any need to raise the debt ceiling, his plan would, if anything, lead to a huge increase in the deficit while at the same time risking a financial crisis.

Carson's proposal is an obvious pipe dream in which the U.S. can easily fix its fiscal problems with enormous tax breaks for high earners and vague spending cuts, and it should not be taken seriously even by a media that always tries to find “both sides” to a story.

But it appears that Carson's disastrous plan hasn't disqualified him in the party that invariably touts the laughable claim that it is the party of fiscal responsibility. Carson is now the leading Republican contender, and his closest rival thus far is, well, Donald Trump.

This article was originally published at Right Wing Watch

Prominent literary figures including Paul Auster and Gay Talese gathered in Manhattan on Friday for a reading of Salman Rushdie's works, in solidarity with the author seriously injured in a stabbing attack.

More than a dozen acclaimed writers, including friends and colleagues of Rushdie, spoke at the steps of the New York Public Library for the event, which organizers said the novelist had been invited to watch from the hospital.

Byrne filed a motion Thursday seeking the unsealing of an affidavit supporting the FBI search of Mar-a-Lago, and in the filing the former Overstock CEO claimed the former president on Dec. 18, 2020, verbally authorized Powell to investigate conspiracy theories about election fraud.