Bernie Sanders: It's time to take on gun manufacturers who sell guns 'designed only to kill people' 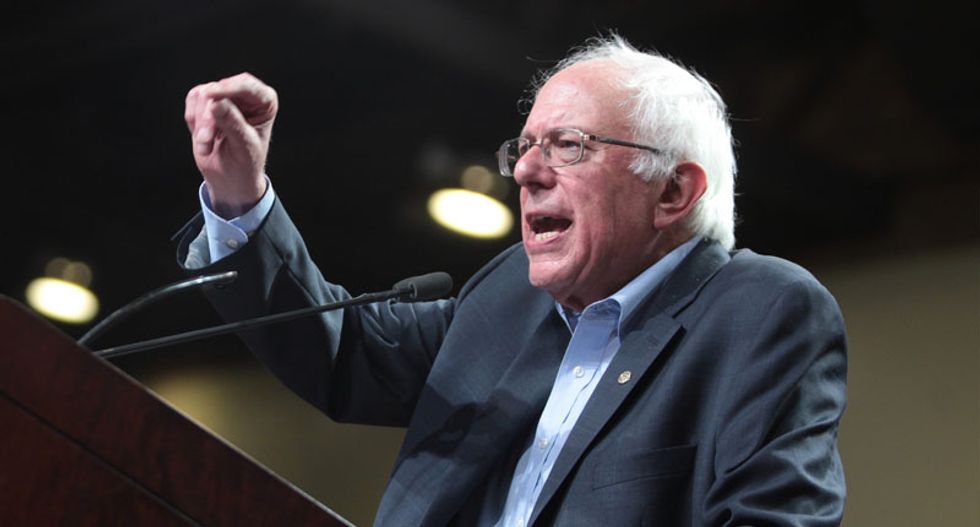 Bernie Sanders has used an appearance before a large crowd in Colorado and an NBC interview to continue his attempt to reassure voters in the Democratic primary about his position on gun control .

“I am not going to tell you that everybody in America agrees with everyone on these ideas,” he told a crowd of 9,000 in Boulder on Saturday afternoon , a day after he spoke to more than 10,000 in Tucson, Arizona .

“But I will you tell you that poll after poll tells us that gun owners and non-gun owners believe in common-sense approaches which make sure that we keep guns out of the hands of people who should not have those guns.”

Sanders has come under scrutiny since the shooting dead of nine people at Umpqua community college in Roseburg, Oregon on 1 October returned gun control to the headlines. The state he represents as an independent senator, Vermont, has some of the most lax gun control laws in the country. As his rivals in both parties have pointed out, his voting record on gun control legislation is varied .

In 1993, for example, when in the House of Representatives, he voted against the so-called Brady bill , which mandated federal background checks.

Since the Roseburg shooting, in which nine people were also injured by a gunman who killed himself after being wounded by police, Hillary Clinton, Sanders’s main rival for the Democratic presidential nomination, has released new gun control proposals including universal background checks .

Barack Obama has discussed the use of executive actions to bypass the Republican-controlled Congress and close some federal loopholes. At a media event which Sanders attended, Senate Democrats unveiled proposals of their own .

In Boulder, Sanders said there was “widespread support to ban semi-automatic assault weapons – guns which have no other purpose but to kill people”.

The last attempt at such a ban, in the aftermath of the December 2012 Sandy Hook elementary school massacre , failed with other measures in the Senate .

On NBC, Meet the Press host Chuck Todd used part of a wide-ranging interview to question Sanders about his “moderate” stance on gun control.

“I wouldn’t use the word moderation,” Sanders said.

“I come from a state that has virtually no gun control. And yet, at political peril, I voted for an instant background check , which I want to see strengthened and expanded. I voted to ban certain types of assault weapons which are designed only to kill people. I voted to end the so-called gun show [purchase] loophole.

“What I did say is that we even keep shouting at each other, which is what’s been going on here for 20 years. Ain’t going nowhere. And kids on campuses and children in schools are being slaughtered. What I think there needs to be is a dialogue.”

If mass shootings are counted as incidents in which four or more people are killed or injured , in just under three years since 20 children and six adults were shot dead at Sandy Hook there have been around 1,000 mass shootings in America . The nonprofit Gun Violence Archive project put the total US gun deaths in 2015 at 10,249 as of Saturday night.

Nonetheless, federal reform attempts have failed and opinion polls show public support for second-amendment rights to be strengthening . In Roseburg on Friday – the day of fatal campus shootings in Arizona and Texas – Obama was greeted with protests over his visit with families of the victims and its supposed “politicisation” of the town’s own mass shooting.

The 15 Republican candidates for president are uniformly against gun control, often citing after mass shootings the need for improved mental health care or for teachers and students to be armed .

At the Boulder rally on Saturday, in the latest in a series of long stump speeches to large and enthusiastic crowds, Sanders pursued the mental health line.

Related: Trump: mass-shooting gunmen are 'sick as hell and geniuses in a certain way'

“The truth is,” he said, “that in America today, there are thousands of people walking the streets for months ... who are suicidal and have homicidal thoughts. And yet for those people it is very difficult in many cases to access the care they need.

He followed the same line on NBC, echoing an earlier discussion of his call as a democratic socialist for a “political revolution” by saying: “I believe what I would call common-sense gun reform plus a revolution in mental health … I think a vast majority of the American people can support an agenda composed of those features.”

Sanders was also questioned about his vote in the House in 2005 for a law that protects, to some extent, gun manufacturers from liability over deaths from gun violence . The National Rifle Association – which does not grade Sanders highly – supported that law. It also funded a campaign against Sanders’ opponent in a 1990 House race that he won by 20 points .

“That was a complicated vote and I’m willing to see changes in that provision,” Sanders said of the 2005 law.

“Here’s the reason I voted the way I voted. If you are a gun shop owner in Vermont and you sell somebody a gun and that person flips out and then kills somebody, I don’t think it’s really fair to hold that person responsible, the gun shop owner.

“On the other hand, where there is a problem is there is evidence that … gun manufacturers do know they’re selling a whole lot of guns in an area that really should not be buying that many guns … probably for criminal purposes.

“So can we take another look at that liability issue? Yes.”