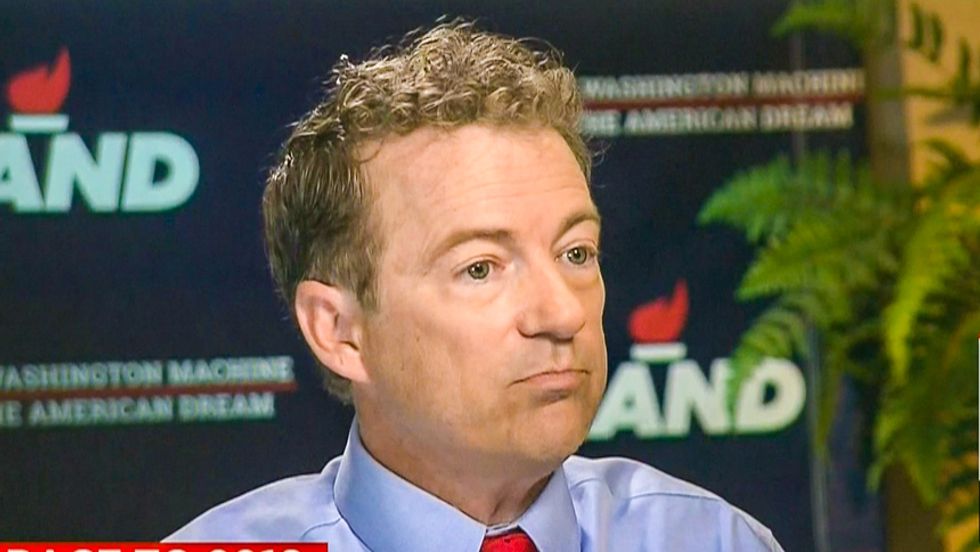 Sen. Rand Paul (R-KY) may be lashing out at his critics, but he continues to display a penchant for falsely attributing statements to former US presidents.

"The only criticisms have come from some guy who's a partisan. We discount partisans," Paul told the Post. "However, there's a ridiculous cottage industry out there of people who think they're smarter than everyone else, and because certain quotes are disputed -- well, yeah! If you want to say something’s not a Thomas Jefferson quote, you can get a whole book on whether it's a quote or not."

What the Tea Party senator cannot dispute, however, is that he has a history of making mistaken historical references. Here are some examples:

1. "The strongest reason for the people to retain the right to keep and bear arms is, as a last resort, to protect themselves against tyranny in government."

Paul attributed this statement, among many others, to Thomas Jefferson -- the (mistaken) source for many statements in the senator's first two books. In this case, he was using Jefferson's alleged words to defend the Second Amendment.

However, the Thomas Jefferson Foundation stated that that phrase never showed up in any of Jefferson's writings. Worse yet for Paul, the foundation debunked the remark in 2009, two years before he used it in his first book.

The senator's frustration toward Kaczynski (and Apper, though she was not named) surfaced after the pair published an open letter quickly shooting down Paul's reference to a "National Prayer for Peace" allegedly stated by Jefferson, as cited in Paul's new book, Our Presidents & Their Prayers: Proclamation of Faith by America's Leaders.

The prayer itself exists, and states in part:

Save us from violence, discord, and confusion, from pride and arrogance, and from every evil way. Defend our liberties, and fashion into one united people the multitude brought hither out of many kindreds and tongues.

Endow with Thy spirit of wisdom those to whom in Thy Name we entrust the authority of government, that there may be justice and peace at home, and that through obedience to Thy law, we may show forth Thy praise among the nations of the earth.

But Apper and Kaczynski note that a simple web search shows a link to the foundation stating outright that Jefferson neither wrote nor delivered the prayer.

Paul used this remark -- also allegedly by Jefferson -- as a way to explain his opposition to the Affordable Care Act, commonly known as Obamacare. But here, again, the foundation proves Paul wrong:

Neither this quotation nor any of its variant forms has been found in the writings of Thomas Jefferson. Its first known appearance in print was in 1953, although it is most likely older. It appeared frequently in newspapers in the 1950s (usually unattributed), and was even used in political cartoons. It was copyrighted in 1957 by the General Features Corporation, as part of a syndicated newspaper feature called "Today's Chuckle." It later became a popular saying among Republican politicians.

4. "I know there is a God, and that He hates the injustice of slavery. I see the storm coming, and I know that His hand is in it. If He has a place and a work for me, and I think He has, I believe I am ready. I am nothing, but truth is everything. I know I am right, because I know that liberty is right, for Christ teaches it, and Christ is God."

As a possible change of pace, Paul attributed this statement to Abraham Lincoln in the new book. When asked to comment on the veracity of the statement, Lincoln scholar Harold Holzer told Buzzfeed, "Oh, not this again" and advised the senator to look for another prayer from the 16th president.

"Lincoln never uttered anything like this," Holzer said. "It's totally apocryphal. 'Do unto others' was more in Lincoln's line. Not this."

5. "Let the world be filled with the knowledge of Thee and Thy Son, Jesus Christ."

Paul uses this quote and attributes it to George Washington to begin a chapter in the new book. But scholars who studied the first president have noted on multiple occasion that the statement was first used in an 1891 book, The Daily Sacrifice, commonly regarded as a forged "prayer book."

"There is no evidence that Washington had a prayer book, or that he penned this one — the handwriting in the original is clearly not his," said Edward G. Lengel, director of the Papers of George Washington project at the University of Virginia.

6. "If tyranny and oppression come to this land it will be in the guise of fighting a foreign enemy."

Paul attributed this remark to fourth President James Madison in his e-book Government Bullies. But there does not appear to be any actual evidence Madison actually wrote it. According to the Federalist Papers, what Madison actually wrote was, "Perhaps it is a universal truth that the loss of liberty at home is to be charged against provisions against danger, real or pretended from abroad."

While Paul has taken the brunt of the criticism from Buzzfeed, he might take some solace in knowing that, as MSNBC reported, he is not alone in this kind of historical mishap.