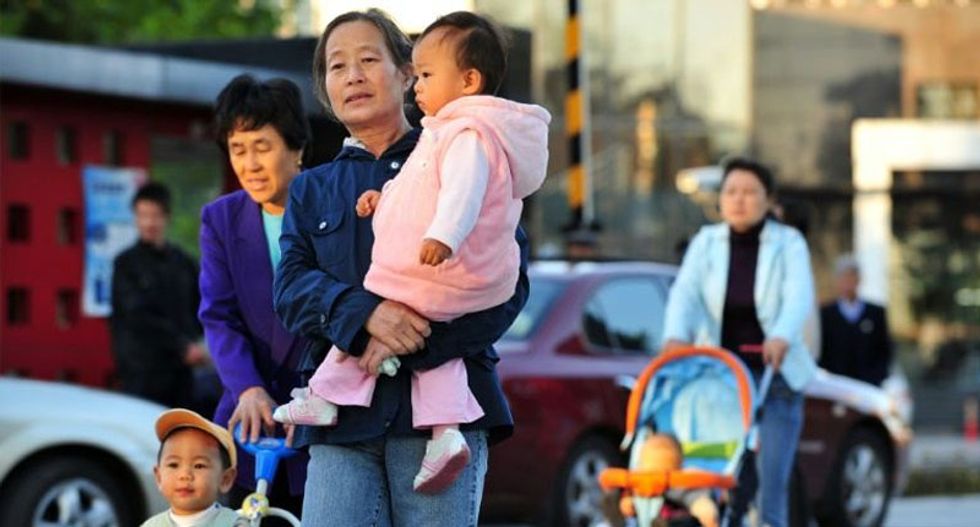 China announced the end of its hugely controversial one-child policy on Thursday, after decades of strict, sometimes brutal enforcement left it with an ageing population and shrinking workforce, heightening the challenges of slowing growth.

All couples will be allowed two children, the official Xinhua news agency reported, citing a communique issued by the ruling Communist Party following a four-day meeting in Beijing.

The historic change was "intended to balance population development and address the challenge of an ageing population", Xinhua said.

Campaigners welcomed the move, but stressed that a "two-child policy" still meant that China would retain population control mechanisms -- while demographic changes will take decades to have an effect, and previous loosenings led to fewer extra births than expected.

The policy, instituted in the late 1970s, restricted most couples to only a single offspring and for years authorities argued that it was a key contributor to China's economic boom.

It was enforced by a dedicated national commission with a system of fines for violators and often forced abortions, leading to heartrending tales of loss for would-be parents.

But China's population -- the world's largest at 1.37 billion -- is now ageing rapidly, gender imbalances are severe, and its workforce is shrinking.

The concerns led to limited reforms in 2013, including allowing a second child for some couples in urban areas, but relatively few have taken up the opportunity.

It was "good news for the couples who wish to have a second child," Maya Wang of Human Rights Watch told AFP, but "the restrictions on reproduction rights remain in China".

"As long as the quotas and system of surveillance remains, women still do not enjoy reproductive rights," she said, adding that change in policy was for "primarily economic reasons".

The Communist leadership met in Beijing to discuss ways to put the country's stuttering economy back on a smooth growth path as it struggles with structural inefficiencies and social policies left over from an era before it embraced market reforms.

Known as the fifth plenum, the conclave discussed the next Five-Year Plan for China -- the 13th since the People's Republic was founded in 1949.

Over four days of meetings the 205 members of the Central Committee, plus around 170 alternates, examined the specifics of the plan, which was largely worked out through a process of national consultations before the leaders even set foot in the capital.

The country's rubber-stamp legislature will officially approve the resulting document next year.

China has enjoyed a decades-long boom since the ruling party embraced market economics and opened up to the rest of the world from the late 1970s.

The process has transformed the livelihoods of hundreds of millions of people and propelled the country to global prominence.

The meeting reiterated the Communist Party's goal to double 2010 GDP by 2020, as part of its aim to achieve a "moderately prosperous society" by the 100th anniversary of its founding.

But growth has been slowing for several years, and analysts say it needs to embrace further liberalisation to avoid falling into the stagnation of the "middle income trap", when developing countries fail to fulfil their full potential.

Yong Cai, a sociology professor at University of North Carolina, Chapel Hill and expert on the one-child policy, said the change announced Thursday was "at least 10 years later than it should be".

?But better than never,? he added.

Chinese social media met the announcement with a collective shrug.

As the country has grown wealthier, couples have increasingly delayed having even one child as they devote more time to other goals, such as building their careers.

A second child, many commenters noted, would only add to the already intense social and financial pressures attached to reproduction.

"I will have four parents to take care of, along with two children," one commenter noted. "This is too great a responsibility".