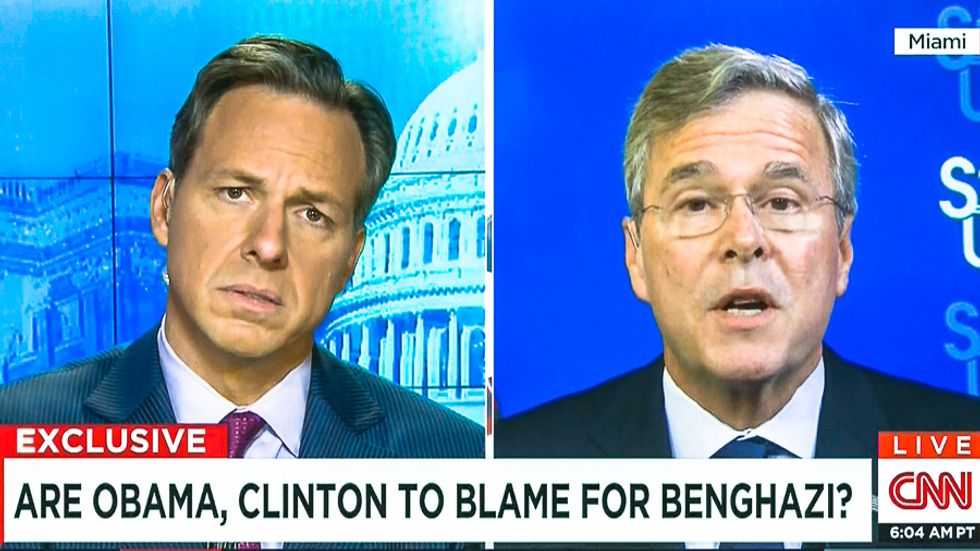 Republican presidential candidate Jeb Bush struggled on Sunday to explain how he could blame Hillary Clinton for the attacks in Benghazi while insisting that George W. Bush was blameless for the Sept. 11, 2001 attacks.

While speaking to Bloomberg last week, Trump reminded the interviewer that George Bush was president when the World Trade Center was attacked in New York.

The comments sparked Bush to respond by calling Trump "pathetic" in a Twitter post. And on Sunday, he continued to defend the 43rd president during an interview with CNN.

"My brother responded to a crisis and united the country, he organized our country and he kept us safe," the GOP hopeful told Tapper. "And there's no denying that. And the great majority of Americans believe that. And I don't know why he keeps bringing this up."

Tapper wondered if Bush's loyalty to his brother "might be in some ways a political or policy liability blinding you to mistakes he made."

"It's what you do after that matters," Bush insisted. "Does anybody actually blame my brother for the attacks on 9/11? If they do, they're totally marginalized in our society. It's what he did afterwards that mattered, and I'm proud of him. And so are a bunch of other people."

"Obviously al Qaeda was responsible for the terrorist attacks of 9/11," the CNN host pressed. "But how do you respond to critics who ask if your brother and his administration bear no responsibility at all, how do you then make the jump that President Obama and Secretary Clinton are responsible for what happened at Benghazi?"

Bush stammered in response: "Well, I -- the question on Benghazi, which we will now finally get the truth to, is was the place secure? They had a responsibility at the Department of State to have proper security."

"And how was the response in the aftermath of the attack?" he continued. "Was there a chance that these four American lives could have been saved? That's what the investigation is about, it's not a political issue... Were we doing the job of protecting our embassies and our consulates, and during the period, those hours after the attacks started, could they have been saved?"

"That's kind of proving the point of the critics," Tapper noted. "You don't want your brother to bear responsibility for 9/11 -- and I understand that argument and al Qaeda is responsible -- but why are the terrorists not the ones that are responsible for these attacks in Libya?"

"They are!" Bush replied. "But if the ambassador was asking for additional security and they didn't get it, that's a proper point. And if it's proven that the security was adequate compared to other embassies, then fine, we'll move on."