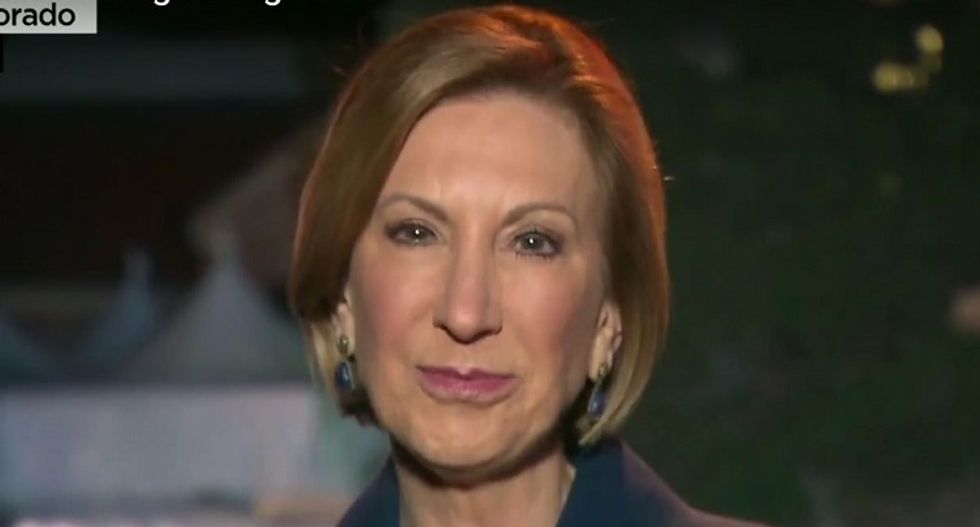 CNN's New Day host Alisyn Camerota, confronted Fiorina on Thursday with evidence a data figure she gave during the debate wasn't accurate, and Fiorina responded rather nastily, in a video of the exchange posted by Media Matters.

During the debate, Fiorina said, "92% of the jobs lost during Barack Obama's first term belonged to women."

Camerota pointed out the fact checkers at the Washington Post traced that figure back to Mitt Romney's 2012 run. Romney's campaign used it briefly but dropped it when further data came to light showing it to be inaccurate.

"Well, first of all, it's The Washington Post that said I wasn't a secretary. So from my point of view, they have no credibility, honestly," Fiorina retorted.

The Post didn't say Fiorina was not a secretary, but instead highlighted that her privileged upbringing and elite education were left out of Fiorina's "rags to riches, only-in-America" campaign story of being a simple secretary who would later become CEO of a tech company.

Fiorina then became testy with Camerota.

"Here's another statistic, Alisyn, if you don't like that one, the extreme poverty rate among women is at the highest level ever recorded," she said. "The number of women living in poverty is at the highest level in 20 years. And every single policy that Hillary Clinton is now proposing, demonstrably, we have evidence that suggests it causes women to be fired, not to be hired. The record's very clear on this."

It has been a longstanding historical fact that far predates Obama's election that women and people of color suffer higher rates of poverty than white men.

Camerota then asked Fiorina if she continues to stand by a claim she made in the first debate that now-discredited videos produced by an anti-abortion group showed a live, squirming fetus being dissected by Planned Parenthood staffers who were harvesting its organs. It has been confirmed that no such footage exists.

Fiorina had said, "As regards [to] Planned Parenthood, anyone who has watched this videotape, I dare Hillary Clinton, Barack Obama to watch these tapes,” she said. “Watch a fully formed fetus on the table, its heart beating, its legs kicking while someone says we have to keep it alive to harvest its brain.”

According to Time Magazine, what does exist is an extremely graphic video, procured by another anti-abortion activist Gregg Cunningham, of a fetus being extracted and placed into a metal bowl. It at times appears to move. There is no sound to the footage and Cunningham refuses to say where it came from. There is no evidence it came from Planned Parenthood. The footage shows no evidence of attempts to harvest its brain.

"Wow, Alisyn, I can't believe we're having this conversation, honestly," Fiorina said. "It's clear now, it's very clear that Planned Parenthood is harvesting body parts. So clear that they had to announce that that they no longer take compensation for it. Honestly, this has been hashed and rehashed is there no other issue of economic import to the middle class in the United States of America that you'd like to talk about this morning?"

When Camerota suggested Fiorina's false claims may have hurt her in the polls, Fiorina seemed to get miffed, and doubled down on insisting her false claims were true.

Watch the exchange, via CNN, here: