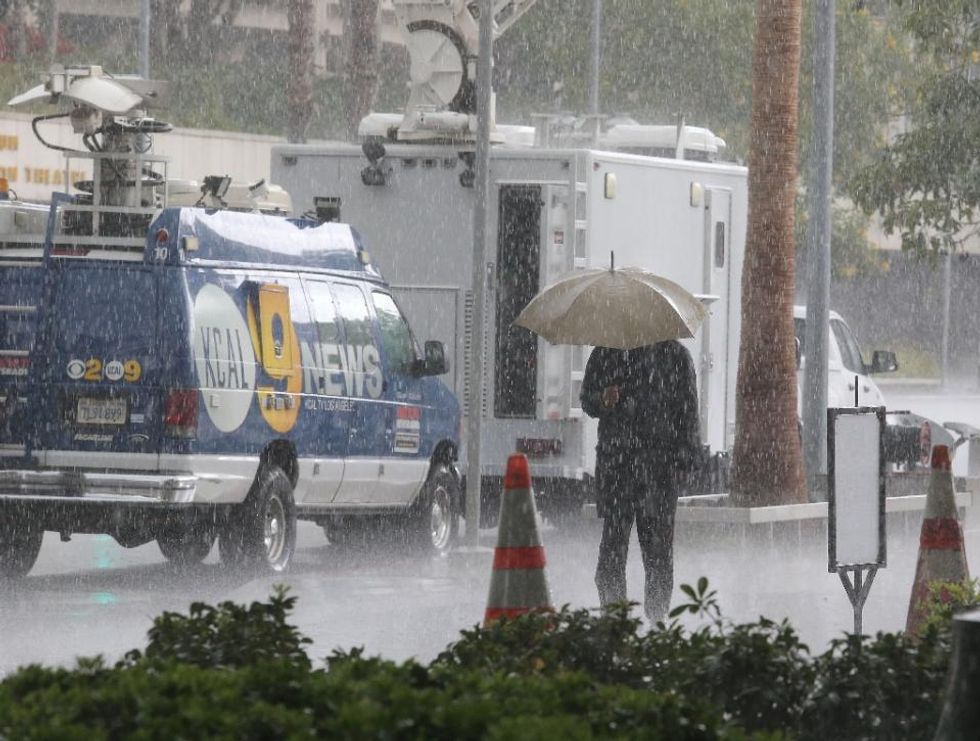 The El Nino weather phenomenon is likely to drench California for some time to come and trigger floods, but it still won't end the state's severe drought, experts say.

Torrential rain has triggered chaos in parts of the West Coast region in recent days.

Some 200 vehicles were stuck on highways in central California late last week amid a deluge of water, mud and debris.

The deluge left trailers partly covered in sludge, while mobile homes were knocked over and houses damaged.

"That was really something -- six inches (15 centimeters) of precipitation per hour," said Tim Krantz, a professor of environmental studies at the University of Redlands.

"I'm afraid that could be just the first of serious storms" which could last all winter, he told AFP.

Krantz and other experts blame the severe weather on a resurgence of the El Nino phenomenon, known to wreak havoc every few years, which comes with a warming in sea surface temperatures in the equatorial Pacific.

It can cause unusually heavy rains in some parts of the world and drought elsewhere.

According to Krantz, some spots in the Pacific have seen temperatures more than four degrees Celsius above average.

"We're experiencing El Nino in California, which increases the amount of precipitation, said Michael Schaffner of the National Weather Service.

The effects of El Nino are expected to last until next spring and forecasters have warned it could be one of the strongest on record. The last major El Nino episode took place in 1997 to 1998.

Schaffner said incredibly heavy rain in recent days fell in places that were scorched by wildfires and where there is little vegetation left to hold the soil in place.

The record drought, now in its fourth year, made this season's wildfires especially vicious since the ground in many places was parched.

Krantz said it was very early for California to be experiencing storms of the magnitude seen in recent days and months.

"We had very early monsoon weather in July. It's almost unheard of," he said.

Still, experts don't expect that the rain, as heavy as it may be at times, will make up for the lack of precipitation over the past few years that has caused a dramatic water shortage in the state.

"This El Nino will certainly not be enough," predicted Krantz.

"It will fill the reservoirs but most of our water supply (80 percent) comes from ground water" that needs snow to be replenished, he added.

But since El Nino is a very warm system it remains to be seen how much of it will manifest itself as snowfall, which was at a record low last year, he said.

Schaffner said that, because the drought was a "multiple year event, we'll still have a drought even if less severe" because of the heavy rainfall.

According to the US Drought Outlook, improvement in the drought is favored across central and southern California due to El Nino-linked climate anomalies.

However, an official with the National Oceanic and Atmospheric Administration said California would need nearly twice its normal rainfall to emerge from drought, something he considered unlikely.

"One season of above-average rain and snow is unlikely to remove four years of drought, Mike Halpert, deputy director of NOAA's Climate Prediction Center, said in a recent statement.